Like the sushi joints that proliferated the Vancouver dining scene years ago, the same trend appears to have happened with ramen houses. In addition to independent ramen restaurants, popular chains, such as Hokkaido Ramen Santouka which originated in Japan back in the 80’s, have made Vancouver their home.

During my mid-week visit, this particular location of Hokkaido Ramen Santouka on West Broadway was busy (as expected). Unlike some other ramen spots, there’s nowhere to put down your name on a list… you just have to wait to see the waitress. As I was a single diner, I was able to snag a seat at the bar but I had to wait a bit in line due to the number of people ahead of me. From my vantage point, I could see them furiously making ramen as well as the countless numbers of characteristic blue bowls that Hokkaido Ramen Santouka is known for.

I picked the Super Combo ($21.90) which seemed a bit expensive but I figured it was a good deal because, in addition to the bowl of Shio Ramen, it came with a bowl of Ikura & Grilled Salmon Don as well as a Japanese Melon Soda with Ice Cream… and ever since our trip to Japan, I’ve been craving that wonderful green elixir of melon soda. 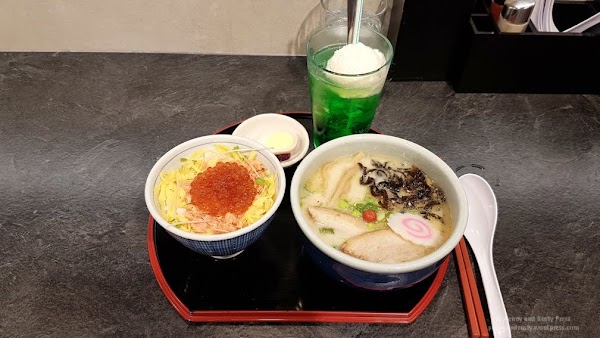 The ramen came with half of an egg, pickled radish, menma, wood ear mushrooms, green onions, two slices of chashu, a slice of fish cake, and topped with a red pickled plum. Unlike some ramen places, there is no option of add extra noodles at the end of your meal or to customize the type of noodle and how it’s prepared. The best part of my meal (aside from the melon soda) was the rich and creamy shio broth – not overly salty and perfect for slurping down.

What could have been better was the egg (which wasn’t really creamy and tender) and the chashu (which was thickly cut but not the least bit tender). The rice bowl had a nice amount of ikura (salmon roe) but took a back seat to the shio broth.

Was the ramen good? Yes, but I was disappointed by the chashu… there are better (and worse) in Vancouver. But I would come back in a heartbeat for the melon soda.