Despite liking Church’s Chicken over places like KFC, it’s been quite a while since I hit up a Church’s. This fried chicken chain from Texas has a long history in the Lower Mainland (their first non-USA location was here).

Previously located at the corner of Kingsway and Gilley, this particular store moved a couple of blocks east when the mini mall that they were stationed in was torn down to make way for new condos. Now, it’s a bit tucked away next to a gas station and is fairly easy to overlook as it’s set back from the street. Despite this, it was fairly busy during my visit so people don’t seem to have a problem finding their way here.

I came by here during National French Fry Day to grab some of their crinkle cut fries. Given that the previous week was National Fried Chicken Day, it seemed appropriate. Their Spicy Chicken Tenders Meal ($8.95) includes 5 boneless chicken tenders, fries, and a drink (had to add a small gravy too because you really need the gravy to enjoy crinkle cut fries). 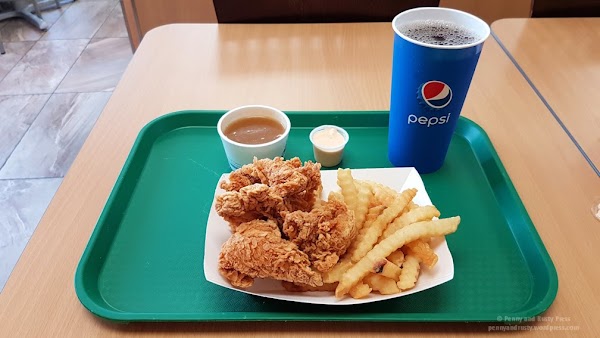 You can choose between spicy and regular chicken but spicy is really the only way to go here. The chicken tenders were meaty and had a nice batter but I feel like the chicken had been sitting too long and wasn’t as good as if it was freshly fried up. Honestly, 5 chicken tenders is a bit much and they could have gotten away with 3-4 tenders at a lower price point. The chicken wasn’t overly spicy (I feel like some Church’s locations are better than others at this). What I really came here for was the crinkle cut fries and gravy and that did not disappoint. A dash of pepper added to the gravy helped kick it up a notch. 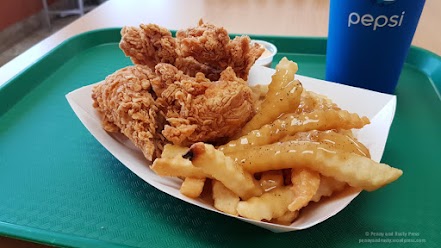 While the fried chicken here isn’t on the same level as LA Chicken, the crinkle cut fries are great and the chicken far surpasses the likes of KFC.