You know… with a name like Best Sushi ‘N Kitchen, you know that they think pretty highly of themselves. This Korean/Japanese restaurant is located in a busy mini mall in Coquitlam (close to Hanamori Sushi).

The interior is spacious and fairly bright and the waitress will greet you in Korean while K-Pop is playing in the background. 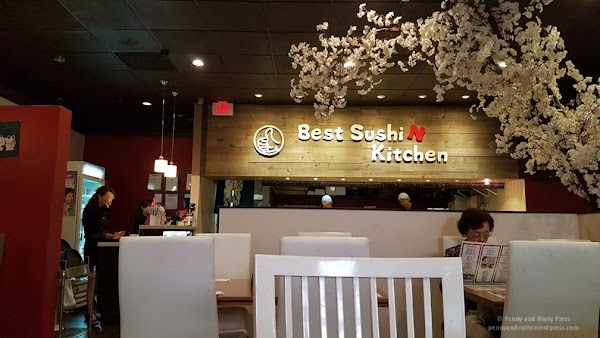 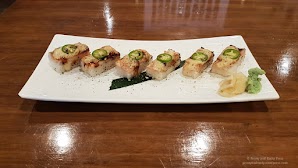 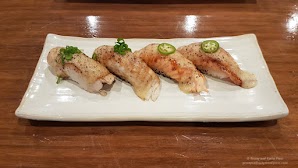 I actually quite enjoyed their version of aburi salmon oshi (seems like everyone is making this dish these days). The single layer of salmon belly on top was buttery and tender and each piece was creamy with just a hint of spiciness from the slice of jalapeño and the use of ground pepper. I like that they didn’t use too much rice and that it didn’t fall apart when you picked it up. 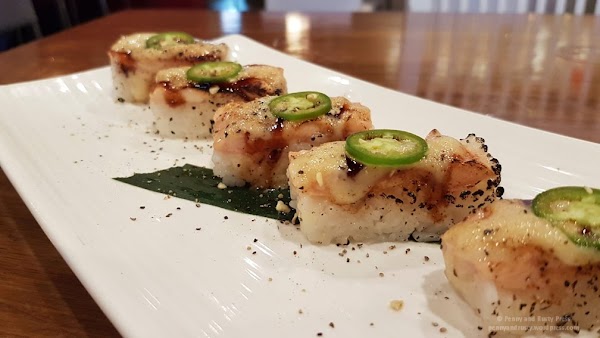 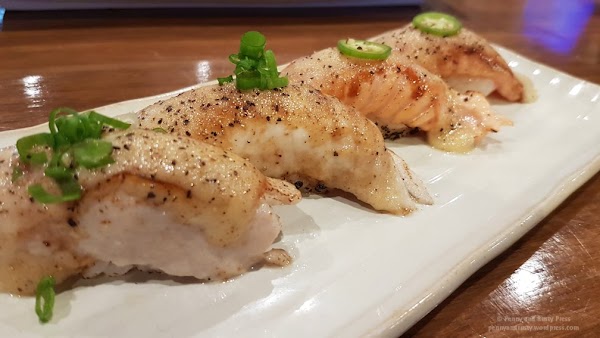 I came back the following week to try some of their sashimi dishes and see how they compare. Their Assorted Sashimi ($22.95 for an advertised 15 pieces) seemed the best deal as I wanted to try more than just tuna and salmon. I wish they had a smaller version of this at a lower price point. As it turns out, my sashimi plate came with 7 pieces of amaebi (small sweet shrimp), 5 pieces of hokkigai (surf clam), 3 pieces of tako (octopus), 3 pieces of tuna, 3 pieces of farmed salmon, and 3 pieces of tai (sea bream or red snapper)… so it wound up being a fairly good value. 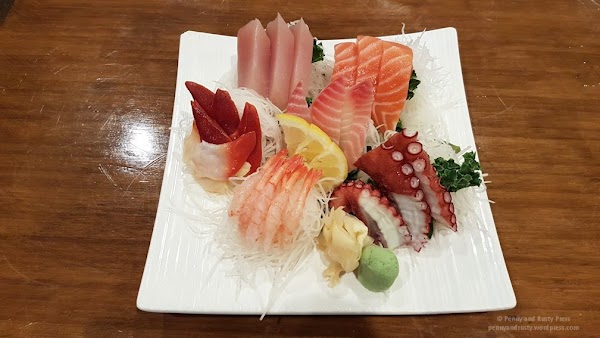 The best of the bunch was the thick-cut salmon which was both fresh and tender. The thinner-cut, translucent slices of tai had a very mild flavour, as to be expected. I thought the tako was well prepared as it wasn’t overly chewy (I’ve had tako at some restaurants where it’s oddly squishy). While the thick-cut tuna slices were served at a relatively ok temperature, the tuna was more firm than it was buttery (oh how I miss the sashimi from Japan). 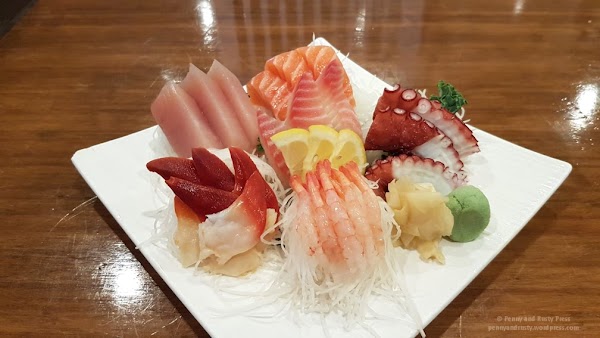 On my subsequent visit, I stuck with some more nigiri sushi… specifically, the Aburi Salmon Belly Nigiri ($3.20 each), Aburi Saba Nigiri ($2.75 each), and the Aburi Spicy Unagi Oshi ($13.95). As in my previous visit, the aburi salmon belly was creamy and melt-in-your-mouth tender with a hint of dusted ground pepper. 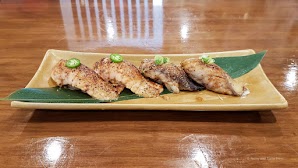 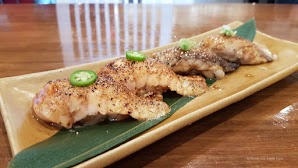 The spicy unagi had a nice kick from the sauce. The only bad thing that I can say about this oshi sushi is that they didn’t make all of the pieces the same size – which is a bit distracting when eating oshi sushi (which is known for being perfectly formed into rectangular shapes). 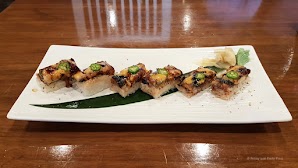 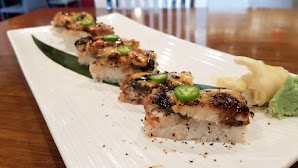 I made an effort to come back and try some of their Korean dishes but when we arrived on a weekend, the only menu they had available was their Japanese menu. I’m not sure if this was just an oversight or if they don’t always offer their Korean menu. In any case, we wound up ordering from their regular Japanese menu and got the Appetizer Sashimi ($7.95), Gomae ($4.95), Spicy Agedashi Tofu ($5.25), Half and Half Teriyaki ($13.95), and Assorted Tempura ($14.95).

The sashimi came with fairly thick-cut pieces of salmon and tuna that I thought was pretty good. Meanwhile, the gomae was a fairly standard offering of boiled spinach with sesame sauce. 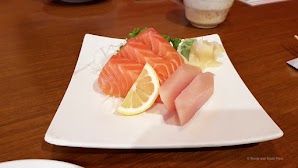 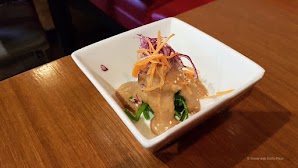 The spicy agedashi tofu was encased in a fairly thick-crusted fried skin and drizzled with hot sauce. 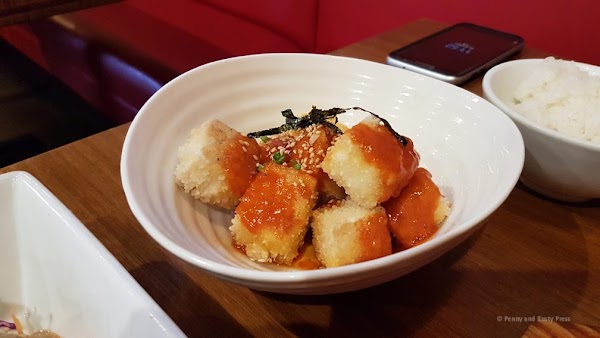 While not the best teriyaki that I’ve had, I did appreciate the ability to order a plate of half beef and half chicken teriyaki (sometimes I don’t want to eat a whole plate of one or the other). This is good for those that like variety. 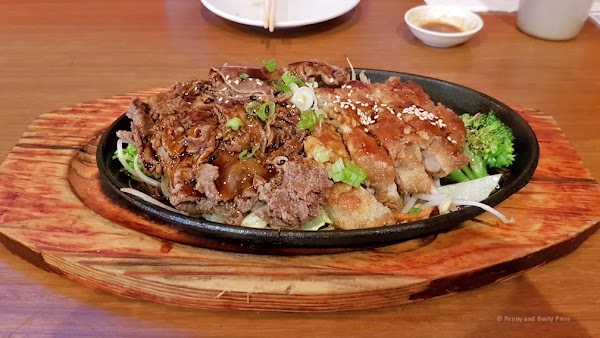 The assorted tempura is a large serving of 3 pieces of prawns and 7 pieces of veggies (yam, sweet potato, and squash). The tempura batter that they use here has a fairly crunchy bite to it. 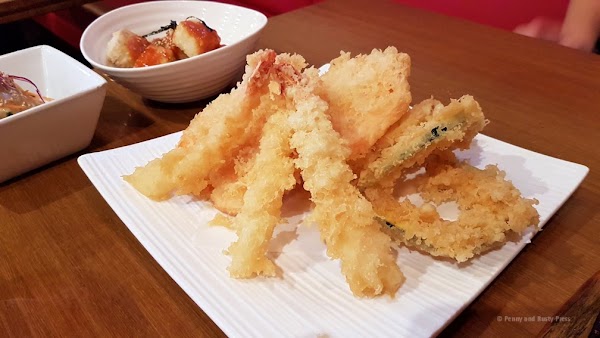 One of these days, I’ve got to come back and try some of their other dishes. My only complaint is their tiny (and constantly busy) parking lot. Service here is also a bit hit-and-miss.

Note: I’ve heard that this place is closed now….