Midam Rice Cake House is one of the many Korean cafes in the busy mini mall located on the Burnaby/Coquitlam border of North Road. In fact, this area is often called “Koreatown” given the proliferation of Korean establishments in the area.

Midam is a bit hidden – tucked away in the bottom corner of the mini mall, near the Hannam Supermarket. Walking inside this restaurant, you couldn’t be blamed for thinking that you’ve walked into a sports bar given the overwhelming about of basketball paraphernalia adorning the walls. During my visit, the interior was rather dark because they didn’t turn on all of the lights. 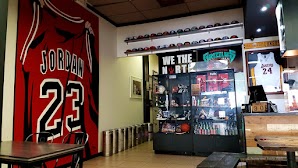 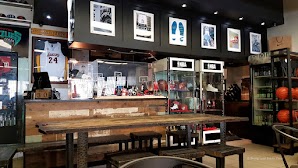 I wound up ordering the Marinated Beef Rib Patty Wrapped in Rice Cake Set ($13) and the Green Tea Milk Shake ($5) despite this place probably being better known for their bingsoo dishes (ie. Korean shaved ice desserts). It took quite a while for my food to come out (I think they didn’t have enough people working at the time). My shake was the first to arrive (about 10 minutes after I ordered it). Topped with whipped cream with green tea powder sprinkled on top, the shake was actually quite refreshing and light but lacked discernible green tea flavour. 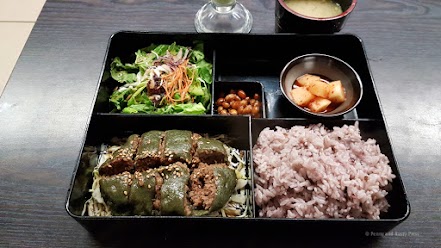 My set meal came with miso soup, a basic yet crisp salad with a slightly tart vinaigrette, pickled radish kimchi, slightly pinkish and fluffy rice, and some type of appy made of beans. The beef rib was ground up and had a consistency similar to a meat patty and then covered with a thin green rice cake wrapper and served on top of shredded cabbage. Although the filling wasn’t too flavourful by itself, there was some sauce underneath that helped. 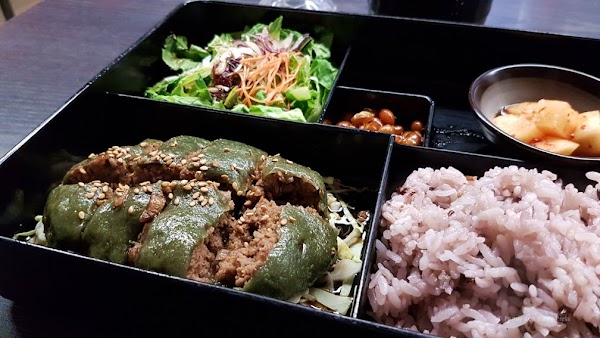 I came back for a revisit the following month and ordered their Spicy Squid and Pork Belly Set ($13) along with a Persimmon Shake ($7). While the lights were turned on during this visit, there’s still not a lot of natural light getting in here. 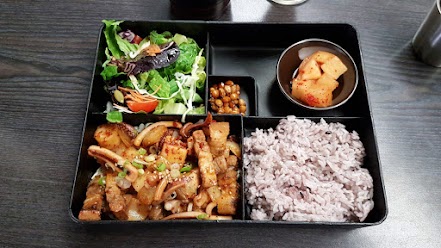 I found that the pork belly was a bit on the chewy side due to the fat not rendering enough but the squid was nice and tender. The pork and squid comes mixed with shredded cabbage, onions, and some inch-long rice cake logs. 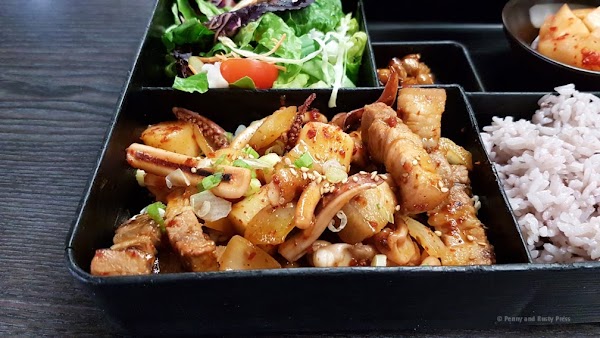