Popina Canteen “popped” up on my radar earlier this year when I saw pictures of lobster rolls and seafood trays show up in my social media feeds. Lobster roll in Vancouver? Yes, please!

Located at the Ferry dock in Granville Island, Popina Canteen’s industrial-chic look owes heavily to the repurposed shipping containers that they use for their kitchen and patio. Overlooking the Burrard Street Bridge, the view is astounding to say the least. 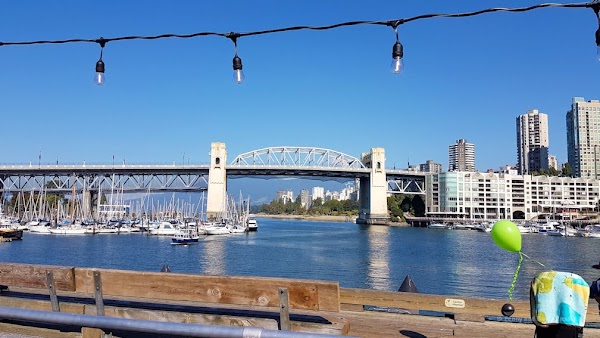 On our visit in mid-September, we were treated to a beautifully sunny day which just added to the ambiance. The limited menu focuses on seafood but is a bit eclectic and tends to the expensive end of the spectrum. “High-end fast-food” – is that a thing?

We wound up ordering the Chicken Fried Humboldt Squid ($12) and the East Coast Lobster Roll ($26). The squid was really good (and didn’t break the bank) – it was served with a spicy dipping sauce that went well with the crispy fried squid pieces. Biting into the lobster roll, you could taste how fresh it was. The toasted bun had a delicate crispness to the exterior and held up fairly well to the filling. Honestly, though, I don’t think it was worth the $26 (current price for live lobster in Vancouver is about $20/lb). 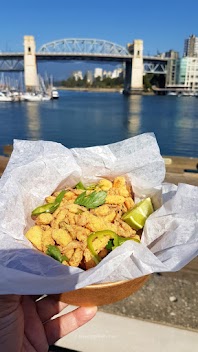 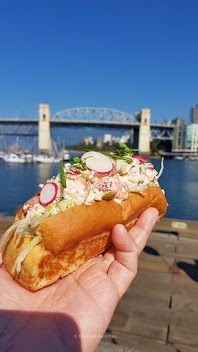 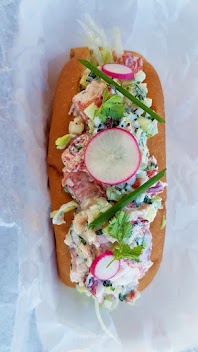 I would have liked to try their soft serve ice cream in a cream puff but I wasn’t interested in their daily flavour that was available on our visit. They also offer up various seafood trays that sounded interesting but ranged between $120-$180.