Weekends are made for dim sum (guess it’s the Chinese equivalent of brunch). We decided to check out Yue Restaurant in mid-August. This well-appointed restaurant is located in a little mini mall in Richmond and has a couple of private rooms in the back.

Prices at Yue are slightly on the more expensive side with small dishes running at $5.13 and large dishes at $7.13 (they have a little note stapled to the menu that indicated that their dim sum prices were $0.25 higher than what was printed on their menu). 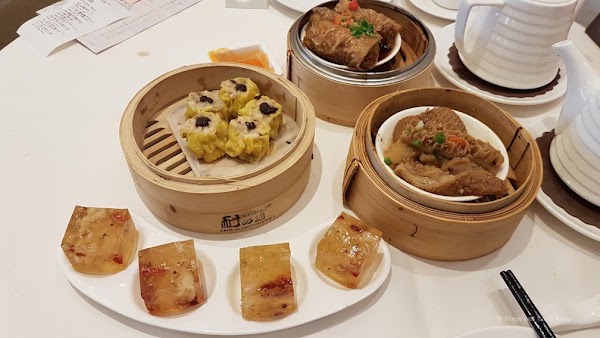 When you order steamed beef tripe at many dim sum restaurants, you wind up with omasum (or bible tripe) – which isn’t bad… but sometimes, I’ve got a hankering for Honeycomb Beef Tripe ($7.13). These tender morsels of tripe were quite good but I was a bit surprised that they were served on top of stewed potatoes (which gave the impression of more tripe than what was in the dish). 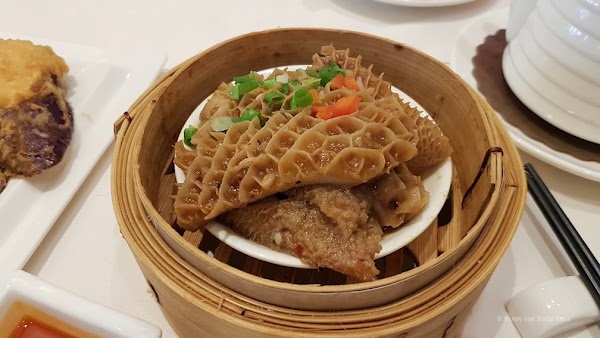 The Fried Eggplant with Shrimp Paste ($7.13) had a perfect crispy texture. Unlike some other restaurants, this was accompanied with a sweet and sour type dipping sauce. 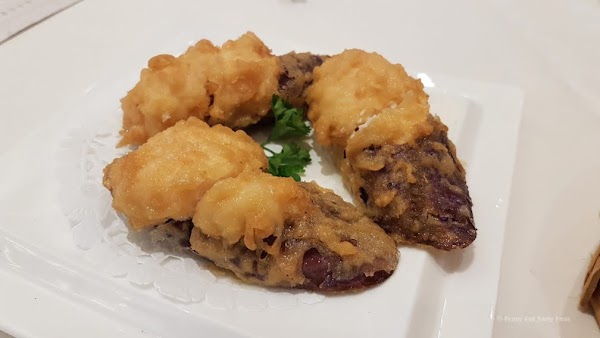 Next up was the Siu Mai with Black Truffle ($7.13). The 5 smallish pieces were similar to the ones we’ve had at Chef Tony and were smooth to the bite. 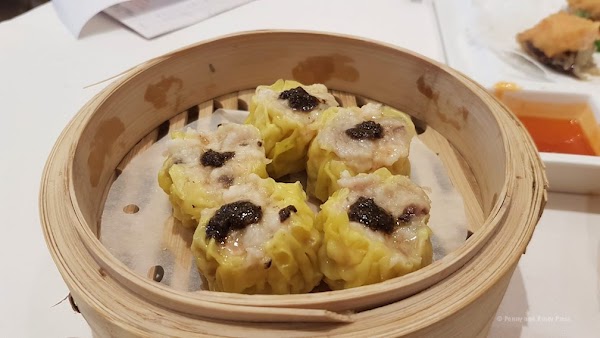 The next dish to arrive at our table was our dessert order of Lychee in Olive Jello ($5.13). These cube-shaped gelatin pieces were super slippery to pick up but were filled with real lychee and goji berry pieces. 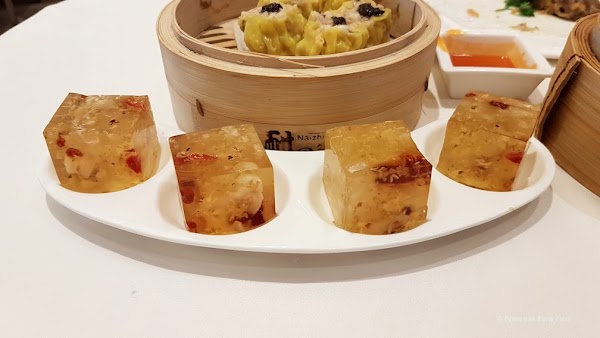 I didn’t pay too much attention to the menu when I ordered the Steamed Red Rice Rolls Chinese Donut ($8.63) because I was surprised that the rice roll was red when it arrived at our table. Not only that, but the Chinese donut was hollowed out and filled with shrimp paste which made this dish velvety, crispy, and savory all at the same time. 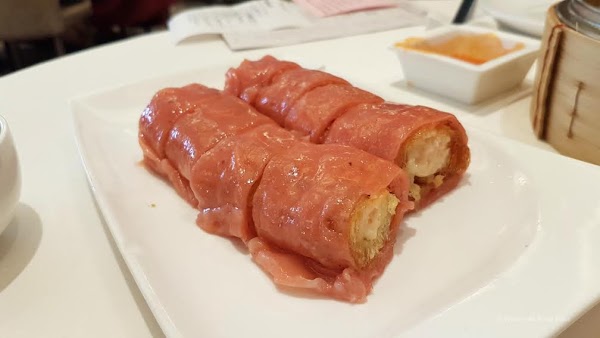 Our final dish to arrive at the table was Steamed Bean Curd Wraps ($7.13) which had a really good pork filling but which were a bit difficult to bite through. 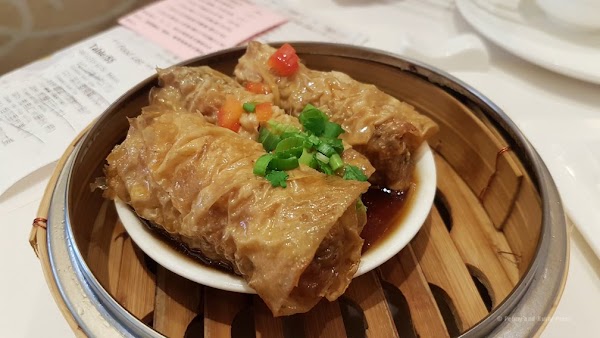 We returned the following month to try out some of their other dim sum dishes. The Steamed Beef Rice Rolls $7.13) were velvety smooth with the filling intermingled with the rice rolls instead of a more traditional filling that’s completely encased by the rice rolls. 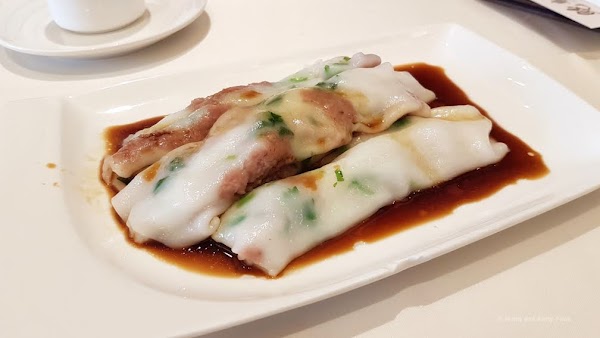 Next up was the Steamed Spare Ribs with Black Bean Sauce ($7.13) which I found to be cut up into large pieces that made it difficult to eat. Most of the pieces were also more on the bony side instead of being meaty. 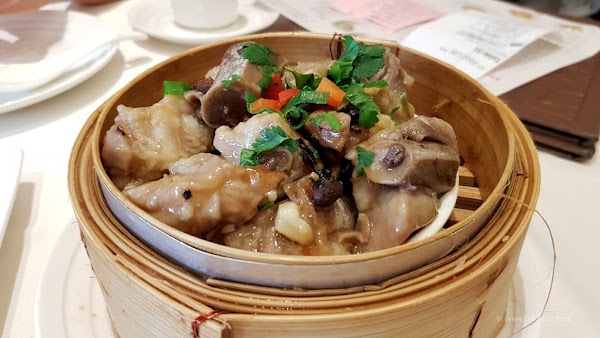 Like in many Chinese dim sum restaurants, our dessert came out mid-meal but I thought the Mango Pudding ($5.13) turned out fairly good. 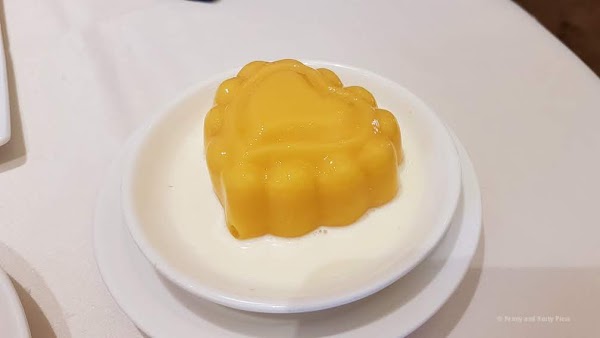 The Pan-Fried Turnip Cake with Preserved Meat ($6.13) is a staple of Cantonese dim sum dishes (also known as lo bak go) and made with grated turnip and Chinese sausage. There’s something very comforting about this dish. 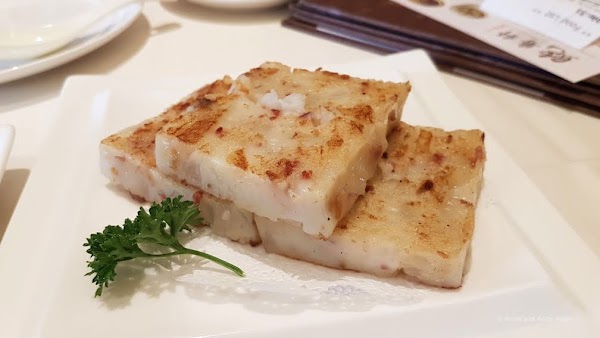 You can’t have dim sum without ordering a dumpling so we opted for the House Special Dumpling ($7.13) made with shrimp, celery, and carrot. The filling was not as plump as you’d see in a har gow dumpling which is made of just shrimp. It was an okay dumpling but nothing really made it stand out to be called a “house special”. 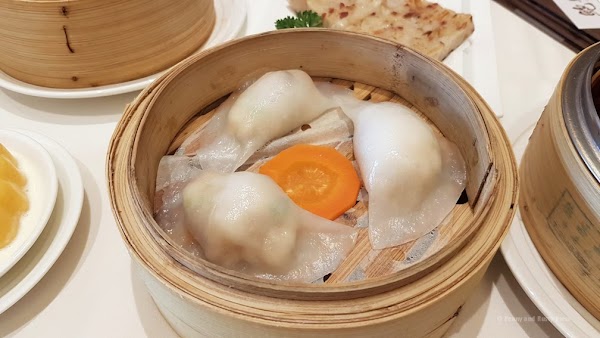 The last item to arrive on this revisit was the Steamed Chicken Feet in Special Sauce ($7.13) which they initially forgot to put in the order for us. While I don’t eat this very often, I found that their version wasn’t very tender. Typically, I expect the skin to come off fairly easily and the cartilage to be very gelatinous but that wasn’t the case here. 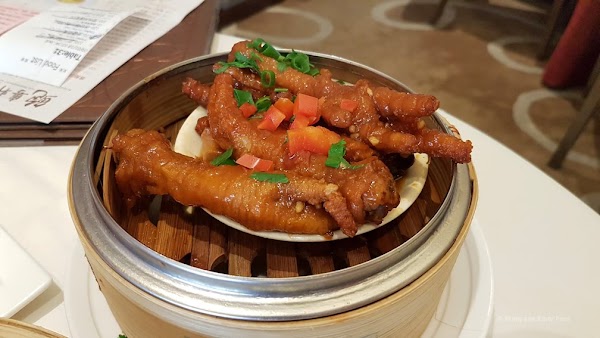 It was another 3 months before we returned to this restaurant. This time, we started with something that’s truly comforting… sticky rice. More specifically, Steamed Sticky Wild Rice with Preserved Seafood ($7.25). This is a variant of the more common dim sum dish that you find at Cantonese restaurants (lo mai gai) with the inclusion of wild rice and seafood. 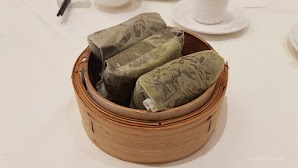 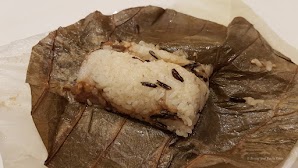 We ordered the Steamed Beef Rice Roll again because we thought they did a pretty good job with it on one of our previous visits. 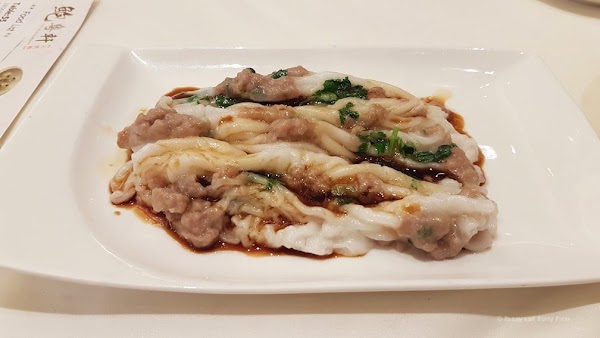 For our dumpling on this visit, we picked the Steamed Dumpling with Scallop and Truffle ($8.75). 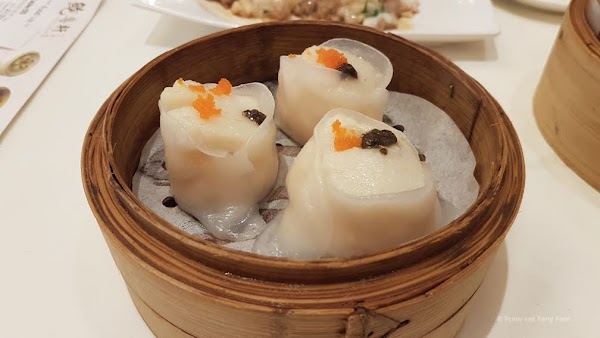 And then followed that up with the Deep-Fried Dumpling with Pork and Shrimp ($7.25). At Yue, I found that these football-shaped dumplings were smaller than at some other restaurants but, unlike those other restaurants where the inside is mostly hollow with a bit of filling, these dumplings were completely filled up on the inside. When you bite into the lightly crispy exterior, you get the chewy texture of the shell mixed with the savory filling.

Lastly, we had the Deep-Fried Bean Curd Sheet with Prawn and Chive ($7.25). I’m not sure what I was really expecting with this dish. Usually, we order a steamed version of the bean curd wrapper but I actually wound up liking this dish a lot. The bean curd wrapper had a nice crunch on the outside which complimented nicely with the filling. 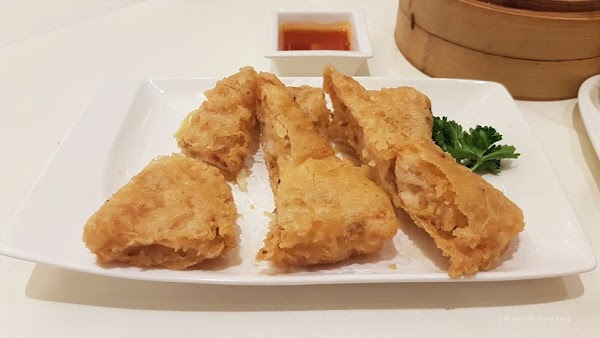 Overall, I found that most of the dishes here were pretty good (with some misses). Tea worked out to $3.60 for 2 people.