In late 2017, Atlas Steak + Fish took over the former location of EBO in the Grand Villa Casino to bring us an upscale steak and seafood house centred around their specially designed, mesquite-fueled, Josper grill. 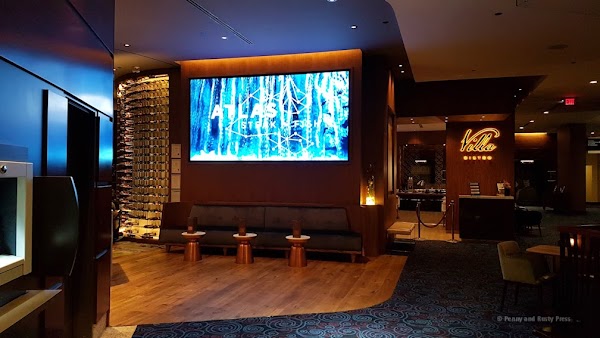 Arriving early on the weekend for their dinner service, we got a very nice table which faced out towards the piano and bar area. We were pleasantly surprised to have a pianist playing a mix of pop hits while we dined and we had a fun time trying to guess the names of the various songs he was interpreting with his own style. 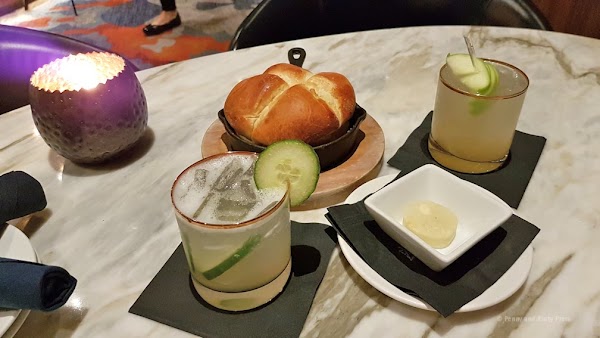 After reviewing their tablet which contained their drink menu, we opted for the Imperial Pear ($8 for a single) and Zen Cucumber ($8 for a single), both of which were quite refreshing. Our friendly server also brought us out some pan bread with blue cheese butter. Let me tell you, this bread was really good! I didn’t want to get too full on the bread but it was served warm in the cast iron pan and had a nice, light crispness to the exterior while the insides were fluffy and perfect with the creamy blue cheese butter. 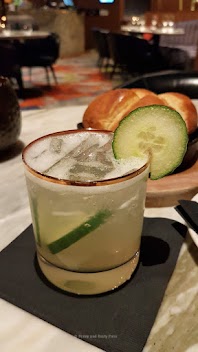 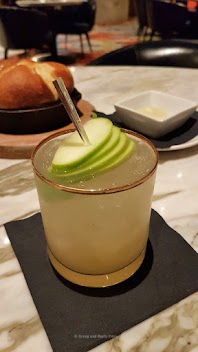 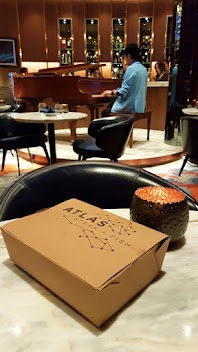 While you can get your Caesar Salad ($14) prepared tableside if you have at least 2 orders, we didn’t really want 2 salads so we just opted for 1 salad (which isn’t prepared tableside). It was a good thing too because this was a rather large salad that we wound up sharing between the two of us. This was a fairly traditional Caesar salad with heart of romaine, parmegiano-reggiano cheese, and a light Caesar dressing. If you enjoy steak and seafood, you’ll have no problem finding something you like here. As with most traditional steakhouses, sides are extra so you have to give some thought as to what should accompany your main. 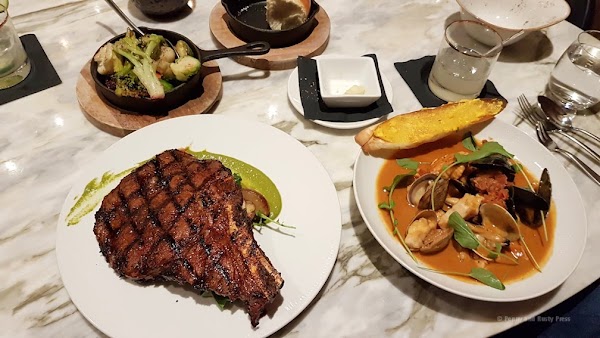 The West Coast Bouillabaisse ($30) was simply amazing! The seafood here (including black tiger prawns, mussels, clams, salmon, and rock fish) all tasted so fresh and I loved how big and plump the mussels were. But the real winner here was the rich and creamy San Marzano tomato and lobster broth. 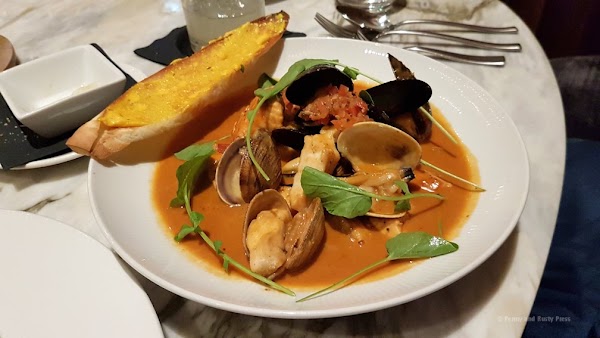 For our side dish, we picked the Josper Roasted Vegetables ($8) which had a nice mix of asparagus, broccoli, cauliflower, beets, and Brussels sprouts. Not exactly a “wow” dish but we felt we needed to get some veggies in our meal. This is what I came for… the 16oz Chili Rubbed Cowboy Rib Steak ($65) from 40-day aged certified angus beef. They recommended that it be prepared “medium” due to the amount of marbling but I asked for “medium-rare” and I’m glad I did. It was cooked perfectly and sat on a “warm potato salad” which really isn’t what you think it is. The meat was so tender, juicy, and flavourful… damn! 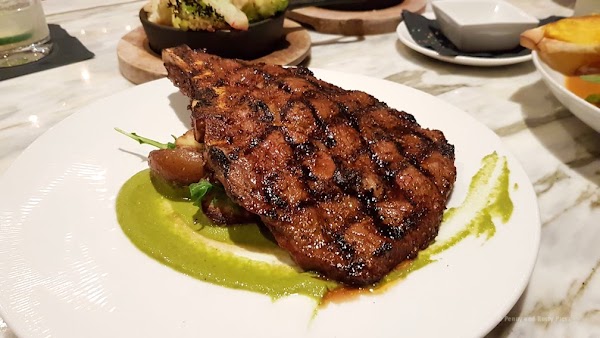 Even though we were super full, we opted for dessert. They’re known for their baked Alaska but we needed something a bit lighter so we went with the Frozen Trio ($10) which turned out to be Early Grey Ice Cream, Peach Sorbet, and Dulce Gelato with strawberries and pineapple. 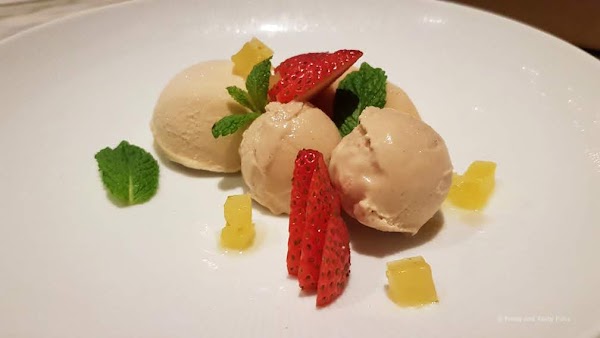 Overall, dinner here was really good and the atmosphere was great for a date night. I think part of the appeal for us was the table location as we were able to do a bit of people watching and we weren’t too close to the piano that it was too loud (we did see a number of diners seated at tables that surrounded the piano eventually move to quieter tables) but we were close enough to be able to see him tickling the ivories.

We came back to try their lunch service in mid-December and managed to sit in the same lounge area. We were lucky that the same piano player was there so we enjoyed our meal with some live music. First off… drinks! We liked the Zen Cucumber last time so we ordered it again and paired it with an El Diablo with Sauza Silver Tequila, blackberry carbonated ginger ale. 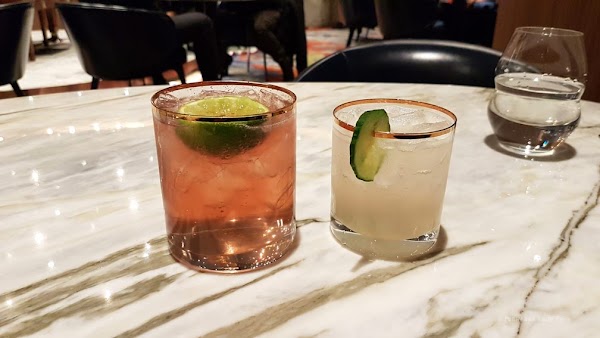 As it was close to Christmas-time, they had a winter set menu available ($35 for 3 course meal) which included this Butternut Squash Salad as well as a main course of turkey breast with mashed potatoes and Brussels sprouts and dessert. The squash was quite tender but made for a filling appy. 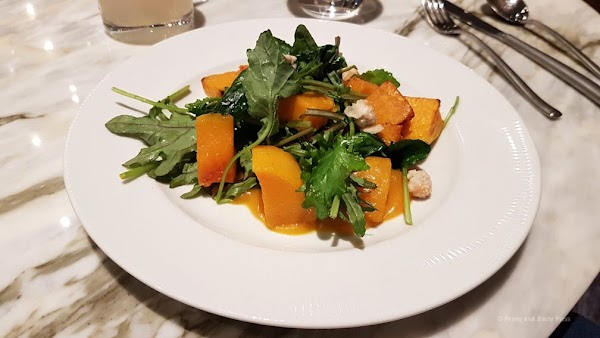 I decided to order from their regular lunch menu because I wanted to try the Lobster Bisque ($10) served with seared scallop and roe. To be honest, I think this soup lacked the rich lobstery punch that I’m used to and the flavour was too muted. 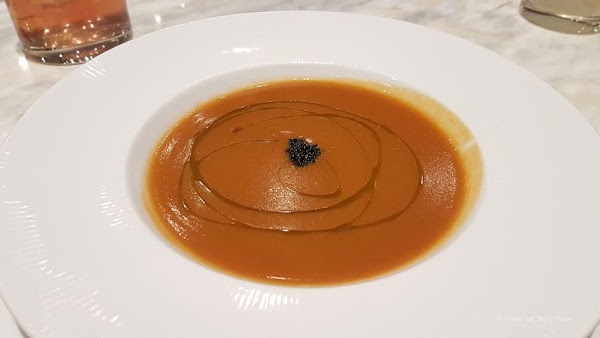 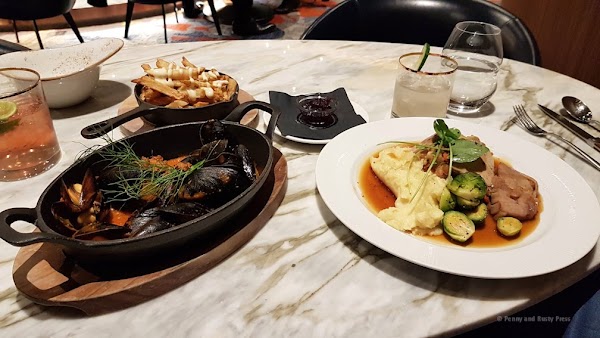 The Turkey Breast turned out pretty good and I’ve always got a soft spot for Brussels sprouts. Odd since I never enjoyed them as a kid. 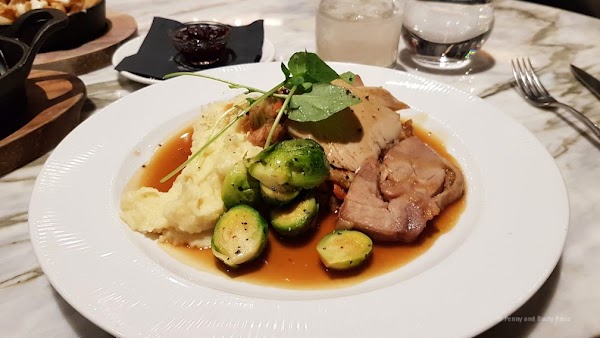 For my main, I opted with the Mussels and Frites ($19) OMG, these frites were amazing! They had a nice crispness to the exterior and they were sprinkled with a cheesy mayo-type dressing. 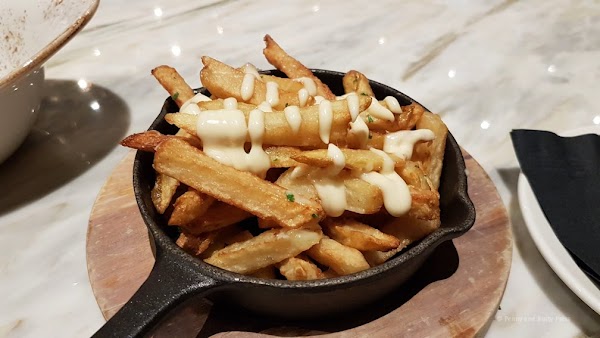 The mussels were served in a cast iron skillet and accompanied with chorizo in a tomatoey broth. For the dessert in the 3-course meal, they brought out Crème Brûlée with Chocolate-Dipped Biscotti. 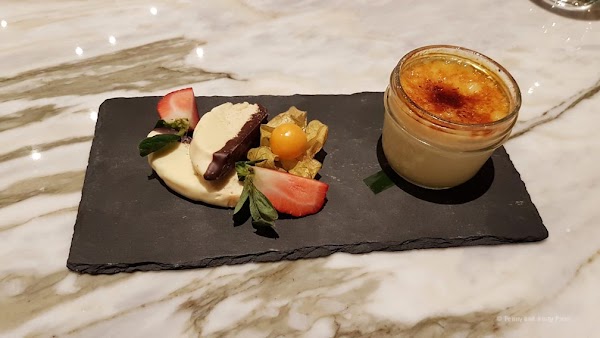 Overall, I’ve been quite pleased by the meals that I’ve had at Atlas. Personally, I prefer the dinner menu offering and enjoy the live entertainment that they have in the lounge.