Sushi Itshoni is a bit of a misleading restaurant that’s located in the Hanin Village mini mall on North Road in Coquitlam. I say misleading because, by the name, you’d expect that this place would have sushi.

To be fair, they do carry a very limited selection of sushi and sashimi items… but the majority of their menu is dedicated to Korean food. Given the location in Koreatown, that’s to be expected. In fact, there are many Korean/Japanese restaurants that dot the Burnaby Coquitlam border but most don’t specifically market themselves as “sushi” restaurants if they don’t actually sell a good selection of sushi (even if it’s gimbak which is the Korean version of sushi).

When I visited in early December, the place was hopping and it seemed like most of the diners had chosen Korean dishes from the menu. Undeterred, I flipped to the sushi section of the menu and was surprised at how few sushi/sashimi items there were (given “sushi” is in their name). I wound up ordering the Tuna and Salmon Sashimi as they didn’t seem to carry many types of fish. However, after about 5 minutes, they came back to me and said they were all out of tuna! Seriously? How can you call yourself a “sushi” restaurant and be out of tuna? I ultimately settled on the Salmon Sashimi ($15.95 for 8 pieces)… a bit pricey for farmed Atlantic salmon but I just went with it. 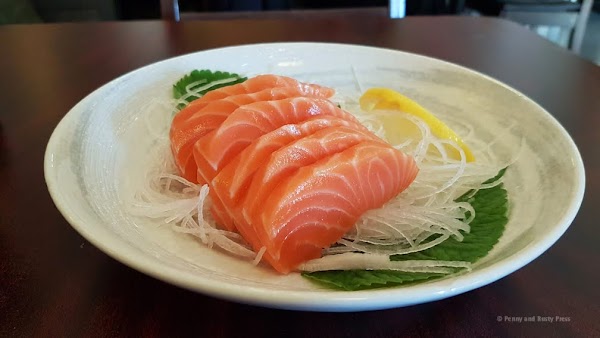 The thickness of the sashimi pieces was okay but, halfway through my meal, I noticed that there were only 7 pieces of sashimi instead of the 8 listed in the menu. Now, I’ve been to places before where the number of sashimi pieces they give you is more than what is listed on the menu… usually if the pieces are on the smaller side. But this is the first time where the number of pieces was less than what was described on the menu. 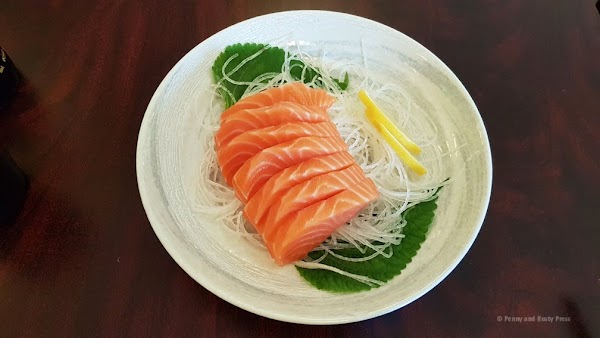 Really nothing outstanding about the quality of the sashimi here… just run-of-the-mill sashimi that you could find anywhere. For the price they charge, not really worth it. Perhaps it’s my own fault for visiting here and not sticking with their Korean dishes.