If you ever find yourself around North Road and Lougheed Hwy, you’ll probably notice the proliferation of Korean restaurants. After having Korean for a number of days in a row, I was getting a bit anxious to try something else so I wound up stopping by Friends BBQ.

Friends BBQ is known for their BBQ – in fact, you can see their traditional Chinese butchery setup inside the restaurant, complete with large slabs of hanging meat. However, they also have a fairly extensive menu that includes HK-style dishes.

My Cold Lemon Tea and complimentary chicken soup were the first to arrive at my table. I was surprised that it took a while to bring out my order since the roast pork and chicken should have already been cooked and all they needed to do was chop it up and put it on a bed of rice (keep in mind that the restaurant wasn’t busy). 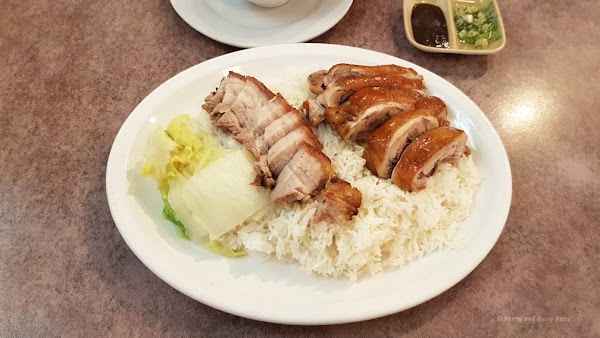 The siu yuk (roast pork) was cut on the thinner side (I usually prefer a slightly thicker cut). While the skin on top was crispy, I found that I couldn’t get that nice, big, satisfying crunch due to how thin they sliced it. The pork itself was a bit salty but wasn’t too bad. The chicken (chopped in the same manner that you would expect to find in a Chinese butchery) was bony but the meat pieces were tender and went well with the green onion dipping sauce. 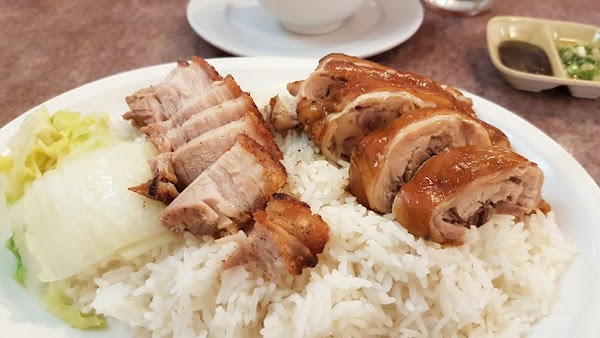 While I was quite disappointed that they didn’t have BBQ duck on my first visit, I came back for a revisit the following week. This time, I did see that they had BBQ duck hanging in the display but decided to try one of their western dishes instead. 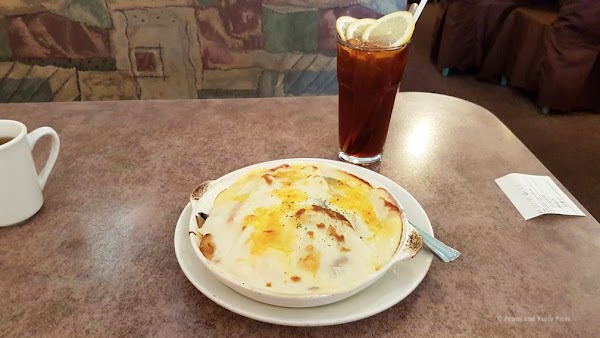 The Baked Seafood on Rice ($12.50 + $1.25 for a cold lemon tea) again took a while to arrive to my table but I expected this since the rice had to be baked. As is usual with this type of dish, the rice on the bottom of the plate is bit dry but it’s topped with a creamy sauce that you can mix into it. The seafood included plump shrimp, fake crab sticks, squid, and white fish. Overall, a fairly good rendition. 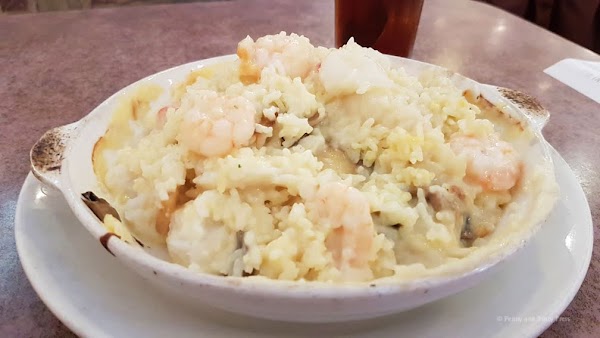 On my next revisit, I wound up ordering the Beef Brisket and Veggie Chow Mein ($12.50 plus $1.25 for the Cold Lemon Tea). This item also comes with the complimentary soup. I was a bit surprised at how much beef brisket was in this dish but I thought the use of the cheap veggie distracted from my enjoyment. On the plus side, the noodles were nice and crispy but I found the sauce to be a bit too one dimensional. If you’re looking for a hearty serving of carbs and meat, this will do the trick. 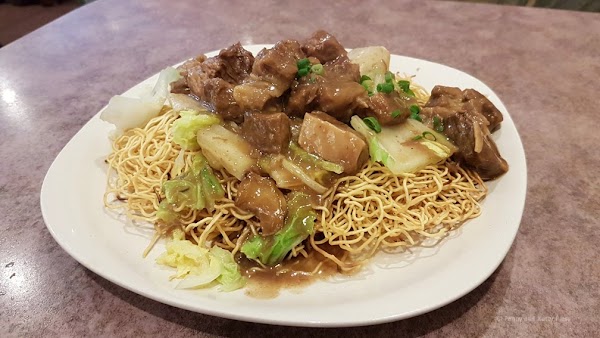 I decided to make one last visit to this place and ordered the BBQ Duck Noodle Soup with Wontons ($8.25 + $4)… well, at least I tried to. Unfortunately, they got my order wrong… twice. First, they brought out wonton noodle soup by itself and then brought out a side of BBQ pork. I told them it was supposed to be “BBQ Duck Noodle Soup with Wontons” so they took it back and brought me out a bowl of BBQ duck noodle soup after fishing out the wontons. So I had to flag them down again and they brought out a side of wontons. Seriously… it shouldn’t be this difficult. 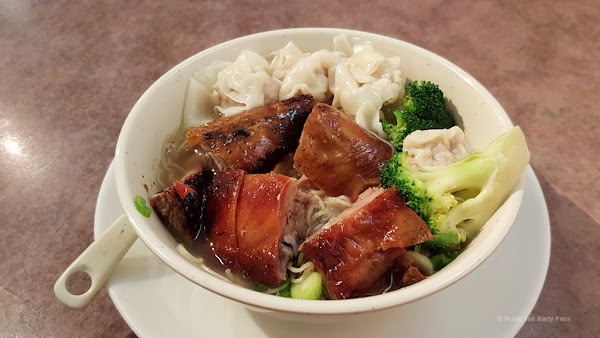 I’m not sure if it was because of the whole mix-up of the order but I wasn’t really thrilled with this dish. The BBQ duck pieces weren’t very meaty and they seemed to have been odd-shaped cuts of the duck (I was expecting the kind of duck pieces that you’d get if you ordered BBQ duck from a Chinese meat store). The wontons and noodles were just meh.

Service seems typical of most Chinese restaurants and they only accept credit card if your order is over $20.