Beyond Meat, the trendy plant-based meat substitute, seems to be taking the fast food industry by storm… notably with A&W (who always seems to run out of stock) and also with places now like Quesada Burritos & Tacos. This growing franchise of Mexican fast food outlets offers Beyond Meat as one of their protein options.

I visited the Quesada located in the New Westminster Skytrain station in early March to see how Beyond Meat translates as a burrito filling. The crumbled Beyond Meat protein is flavoured with habanero pepper to give it a bit of a spicy kick. While it doesn’t contain meat, it’s not exactly “veggie” as the main ingredients are water, pea protein isolate, canola oil, and coconut oil… along with a bunch of other ingredients. In fact, it actually has about the same level of fat and calories as regular meat so I’m not sure how healthy it is.

Their Beyond Meat Burrito Bowl ($7.69 plus $1 for guacamole) actually isn’t that bad… like many places, you can customize the ingredients in your burrito bowl and I found that the Beyond Meat filling had a nice lingering heat (although that might have been from the habanero mayo that I added). 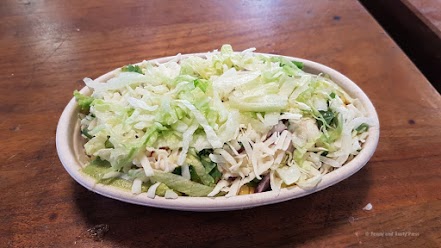 I returned later in the month to try their Beyond Meat Burrito ($7.69 for a regular size). I have to say that I wasn’t a real fan of their regular burrito. Sure, it was really packed (mainly with rice and beans) but I found the Beyond Meat filling got lost in the filling and I couldn’t even notice that it was there. Plus, due to how much filling they use and the thin wrap, this burrito gets very messy to eat. The one thing that I really enjoyed in this burrito was the pink pickled onions. 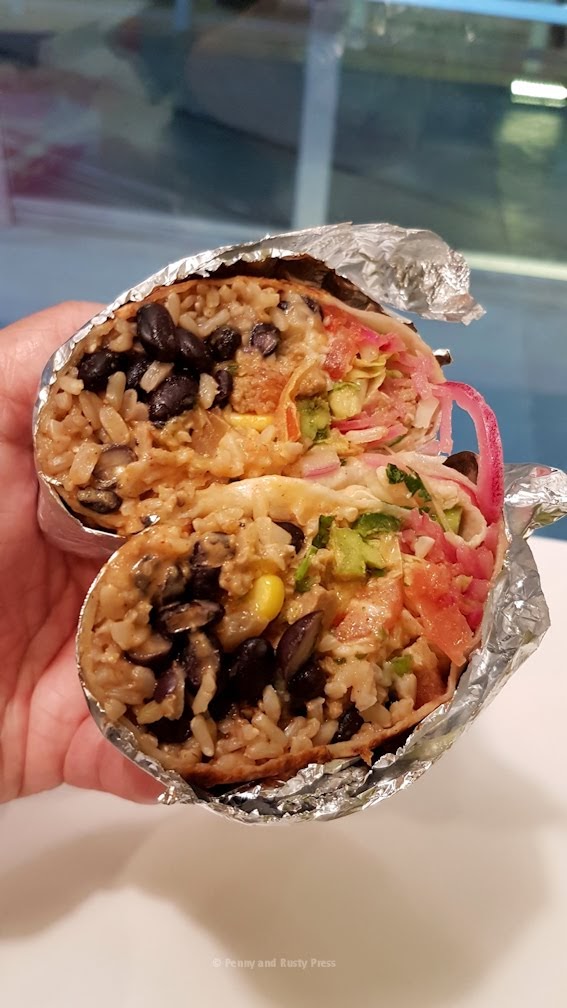 Personally, I’d stick with the burrito bowl vs the traditional burrito wrap… especially when it comes to the Beyond Meat versions.