After running out of places in the South Burnaby and New Westminster area to eat, I’ve been gradually expanding my range to areas around the Burnaby/Coquitlam border. This area is primarily known for having lots of Korean restaurants but I wasn’t really in the mood for Korean so I stopped by Pho Capital.

Like most restaurants in this area, Pho Capital is located in a rather nondescript mini mall. The restaurant wasn’t very busy during my visit around noon on a weekday but I’m not sure if things pick up later in the day.

I ordered the #14 Pho Noodle Soup with Eye of Round Steak, Fatty Beef Brisket, Soft Beef Tendon, and Beef Tripe ($8.50 for a small bowl) also known as Pho Tai, Gau, Gan, Sach. Almost immediately after placing my order, the waitress was back at my table with my meal and a plate of bean spouts, basil, lime wedge, and jalapeño slices. 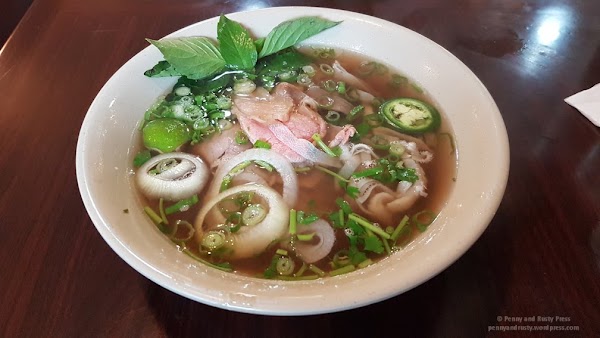 The pho was topped with a couple of pieces of rare beef (something that I look forward to when having pho). Underneath, there were plenty of thinly shaved pieces of brisket and a few pieces of tendon and tripe. The broth was pretty good and I think I’d come back to try some of their other items.

As it turns out, I came back about 4 months later and ordered the Marinated Lemongrass Pork Slices and Fried Spring Roll with Veggies ($11.75) or Bun Thit Nurong, Cha Gio. The crispy spring roll was made with a wonton wrapper and the bowl was fairly big (with lots of shredded cabbage underneath). By itself, it lacked a bit of flavour but it was easy enough to kick things up a notch with the tableside sauces. 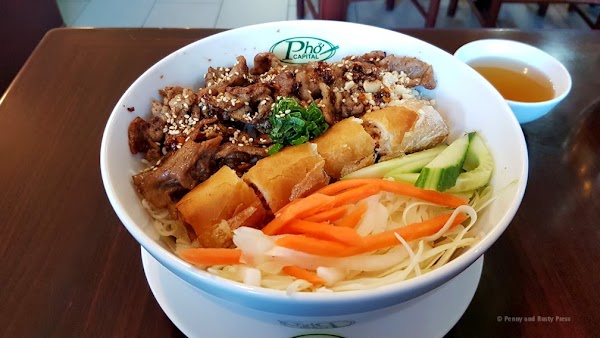 As with my last noodle soup here, the Bun Bo Hue ($10.99 for large) which I ordered at the end of the year, came out really quick. Interestingly, while I was hit with the aroma of this soup as soon as it arrived at my table, it wasn’t overly spicy and I resorted to the table sauces to kick it up a notch. In the bowl, there’s thin slices of ham, well-done flank, and chunks of chicken balls. The thick, rounded noodles were pretty good and had a nice chew to the bite. 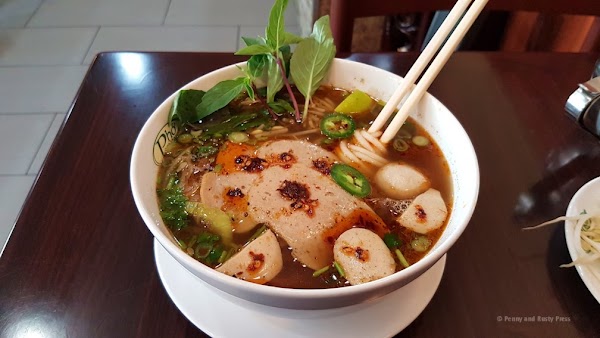 On my last visit, I decided to opt for the Marinated Grilled Lemongrass Chicken and Pork Chop on Rice ($12.75) which I found to be okay but a bit dry. Similar to lemongrass pork, there was a lack of flavour which required the use of the tableside sauces. 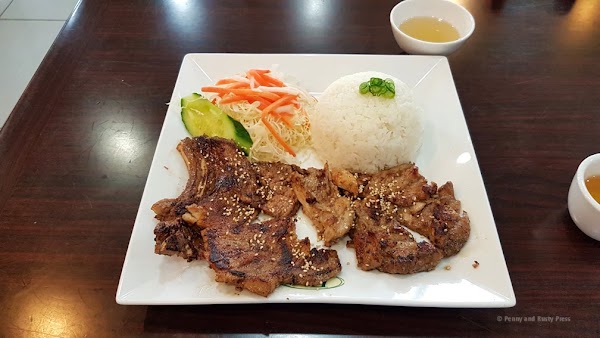