Recently, Kushi Mura Izakaya opened up on the main floor of the Shops at New West (ie. New West Skytrain Station) at the western end closest to Quayside drive. Before you head over here, just keep in mind that parking rates here are high so you might be better off to find parking outside of the station.

The interior is airy with high ceilings and, while not exactly dimly lit, it’s not bright either with very little natural light unless you’re near the window. They use a lot of wood in the furnishings and various Japanese-themed decorations adorn the walls, bookcases, and floor space. The menu is what you would expect at an izakaya… a good selection of different tapa-like dishes.

I ordered up the Salmon Toro Sashimi ($14 for advertised 5 pieces). What arrived was 6 large (although somewhat thin) pieces of excellent salmon belly. These were so slippery to pick up and just slid down my mouth. Mmmm…. so buttery good. 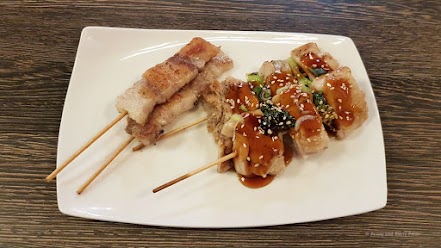 In addition, I ordered the Yakitori ($6) and Pork Belly ($5) skewers. While I found that it was a bit strange that the yakitori had broccoli with the pieces of chicken (usually, I see this paired with green onions or leeks), it actually worked out quite well with the broccoli adding a crunchy aspect to the skewers. I did, however, find that the pieces spun around a lot on the skewers which made it difficult to eat. The pork belly was a bit crisp on the outside and nice and fatty (be careful of the oil that slides down the skewers when you eat this). 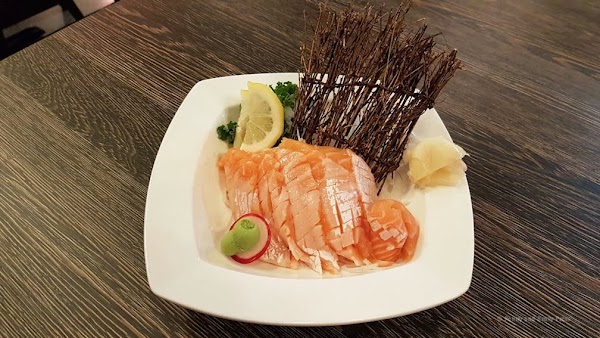 On my next visit, I decided to try their Pan-Fried Gyoza ($5.50) – you have a choice between pan-fried and deep-fried. It actually arrived at my table fairly quickly – quicker than what would be expected given the serious looking char that was sported on the gyoza wrappers. Despite the char, however, the gyoza only had the slightest crispness to the bite (probably just a personal preference but I would have liked the char to have more texture). 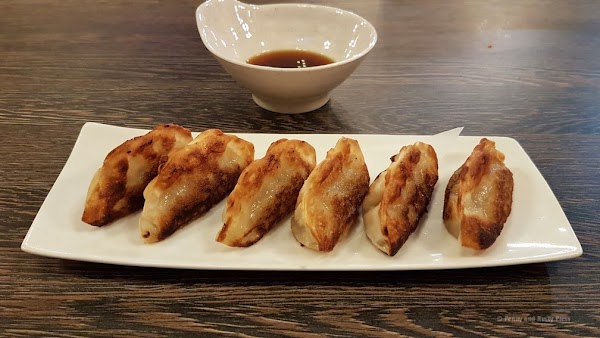 I also decided to try their Salmon Aburi ($10) which is an oshi (pressed or boxed) sushi that is becoming quite common around town. The single layer of salmon on top was saucy and creamy and there was the slightest amount of a spicy kick to it. Like many places, I personally found the pieces to be formed with a bit too much rice but that does make it filling. 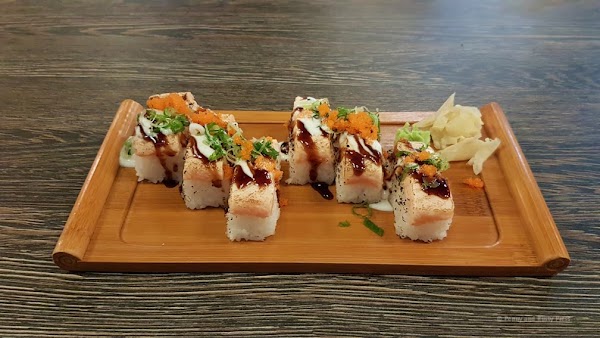 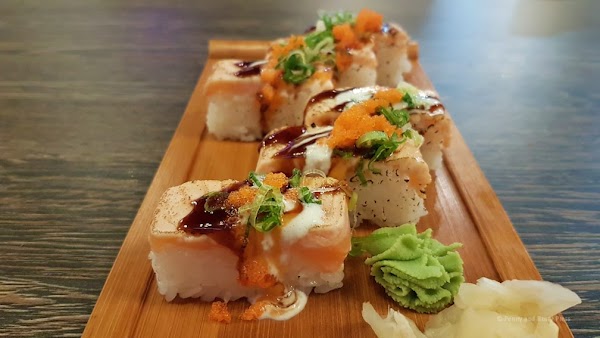 On a subsequent visit, I ordered the Tuna Yukke ($8) which is a raw tuna dish with chopped up tuna and avocado topped with sprouts. You need to mix it up a bit because the sauce is on the bottom of the bowl. It’s a very basic type of dish that you just enjoy for the freshness. 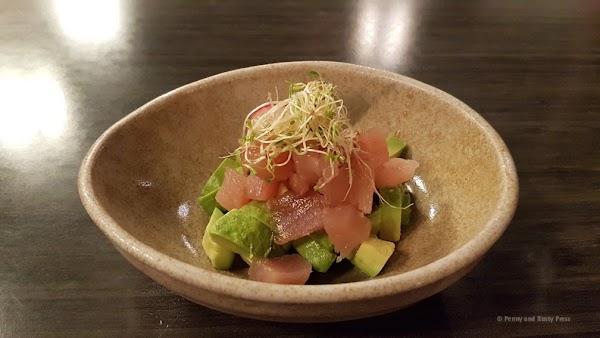 Kushi Maru has a number of different oshi (boxed sushi) dishes including both aburi (flame-seared) and fresh types. Having tried their Salmon Aburi before, this time I picked the Mango Scallop Oshi ($12) which was creamy on the top from the mix of mango and chopped scallop as well as the sauce drizzled over it. 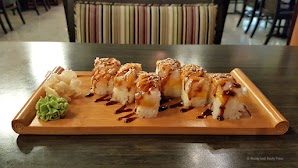 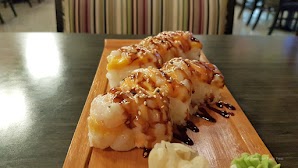 I’ve got a soft spot in my heart for Okonomiyaki ($8) ever since we visited Japan and had to cook these ourselves. The one at Kushi Mura is actually on the small size when compared with the huge ones we had in Japan. Actually this worked out pretty good for one person as the okonomiyaki pancake can get quite filling. To lighten things up a bit, I paired it with an order of clean and fresh Salmon Sashimi ($7 for the half order). 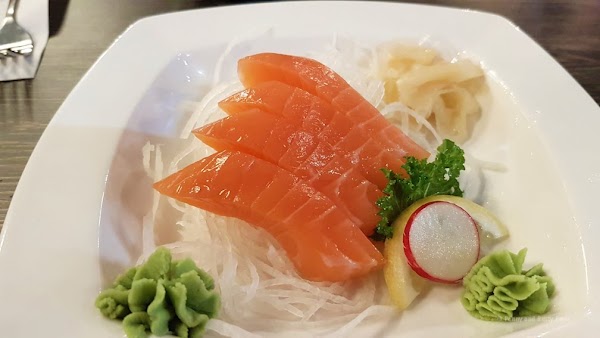 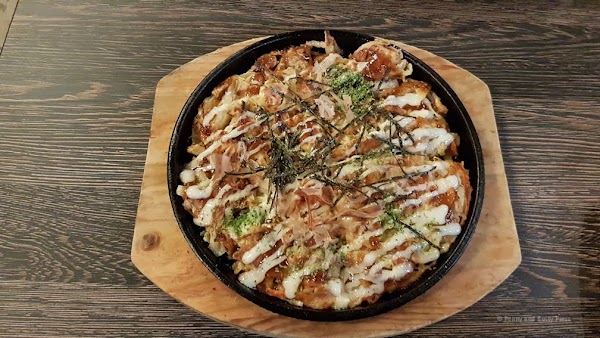 Let me just preface this with the fact that I had no idea how big the Sashimi Salad ($15) was going to be when I ordered it. This was a huge bowl filled with tuna, salmon, wild salmon, veggies, fruit (apple, grape) and avocado. While it would have been nice to see a bit more variety in the sashimi, it was impressive to say the least. 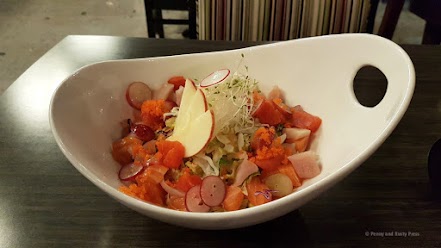 When I visited in late February, I noticed that they did some renovations since my last visit… they’ve put in some pony walls which separate the tables – I suppose to give people a bit more privacy. It doesn’t look as open as it used to but maybe that’s what they were going for. As for the food, I figured it was time I tried some of their nigiri sushi so I ordered the following (the nigiri is priced for 2 pieces): Unagi ($6.50), Scallop ($7), Salmon Toro ($6), Hamachi ($6.50). 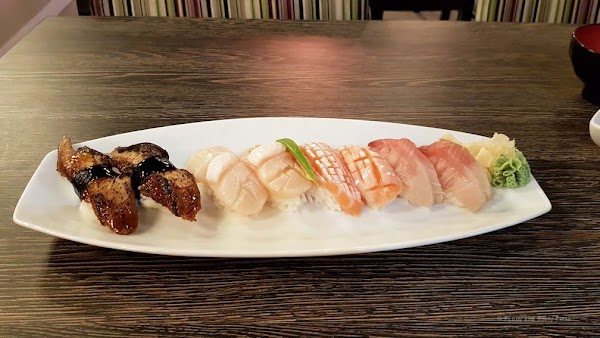 If you’re looking for a perfect piece of unagi nigiri, this is it… tender, nicely proportioned and with the right amount of sauce. The scallops were buttery and plump. While the hamachi is pleasantly clean and fresh, the real standout here was the salmon toro – super fatty and tender… I could eat this all day! 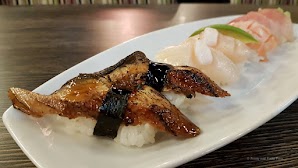 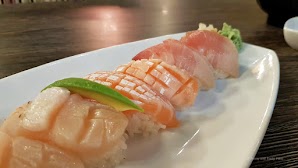 As a bonus, they brought me out a complimentary Negitoro roll with chopped tuna and fresh green onions. While I was a bit full already, this was a welcome challenge to finish. 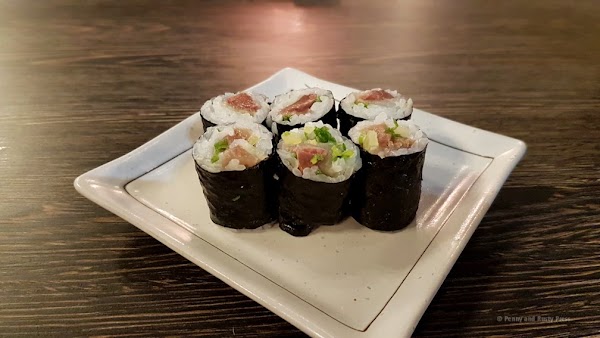 While they normally sit me in the back, I finally asked to be seated near the window and I think that makes all the difference here as the natural light makes things much brighter. On this visit, I ordered the Tuna Toro ($14) – I had originally wanted to try their bluefin tuna but they were all out. Actually, they wound up bringing out the salmon toro initially by mistake. I probably should have stuck with the salmon toro because I really like that here. 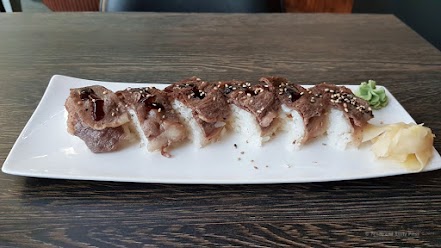 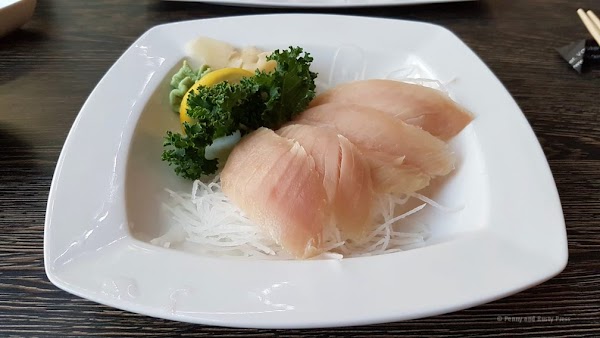 I also ordered the Aburi Beef Oshi ($12) which was also probably a bad choice on my part. Each piece of nigiri was topped with two thin slices of fully cooked beef and I found it was too dry. I’ve had something similar at a couple of other restaurants where the beef was still tender and juicy. 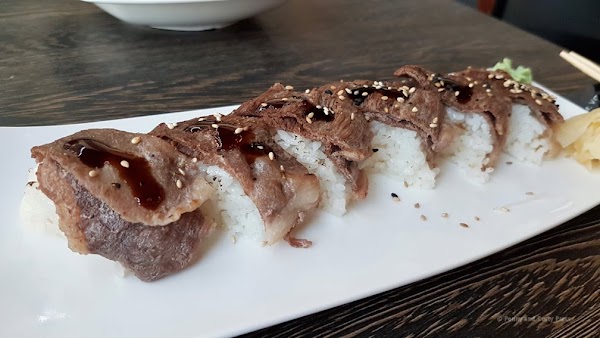 I finally splurged and ordered their Sashimi Combo ($30 for 18pc). I really wish they had a smaller (less pricier version) of this available. As-is, it would make for a good share dish. 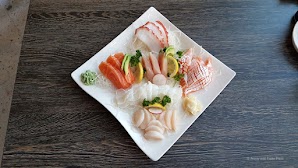 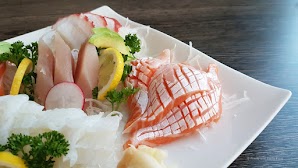 For your money, though, it was a pretty good value as I think I got more than the advertised 18pc count. It included salmon, tuna, tako, ika, hotate, and salmon toro. Of course, the salmon toro was my favourite because it just melts so smoothly in your mouth. I did find that the ika was cut differently than I’m usually used to (normally I see this cut in very thin strips) but it turned out well with a crunchy texture and a slightly slimy aftertaste. 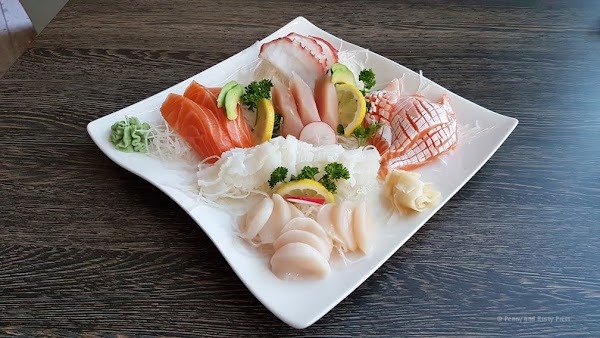 On my subsequent visit, I tried their Spicy Scallop and Tobiko Aburi ($13) and their Pork Belly Lettuce Wrap ($8.50). Again, I found that their aburi sushi has a bit too much rice for my liking but it had a slightly spicy flavour with a creamy texture. The lettuce wrap was a bit difficult to eat given the narrow romaine lettuce leaves but I did like that it was crisp. The pork belly was quite oily which was a bit of a turnoff (odd since I usually like fatty pork belly). 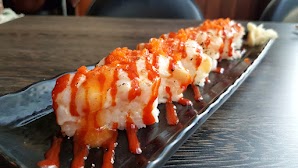 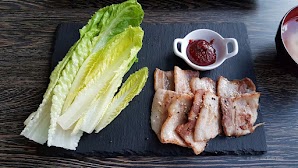 On my last visit, I ordered the Salmon Tataki ($12) for 8pc of salmon and alternating avocado slices.You really can’t go wrong with the salmon here. 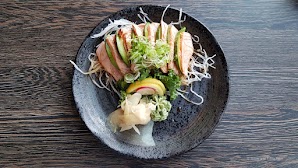 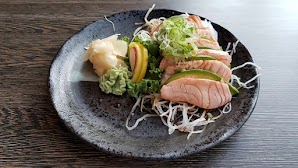 I also ordered the Hamburg Steak with Prawn Tempura ($14.50) which they advise that it takes 15 minutes to make (I think it came out in under that time tho). Unlike the usual Hamburg steaks that I’ve had elsewhere, these patties are quite flattened and resembled Salisbury steaks. In any case, they were topped with a fried egg, onions, and a demi-glace sauce. 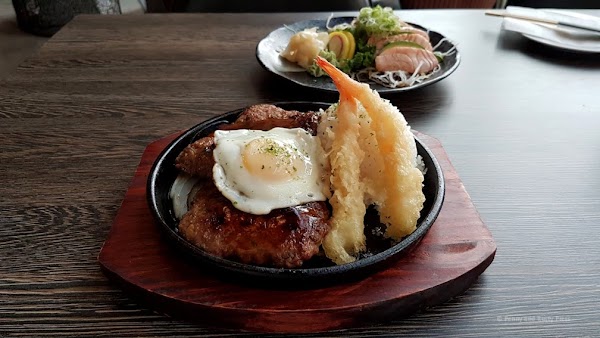 Overall, they have a fairly extensive menu here and most of the items are spot on. Definitely make sure you try their salmon toro sashimi if you have a hankering for some melt-in-your-mouth sashimi.