For the better part of my childhood, I grew up in East Van… specifically, in the area close to the PNE. Back in the day, it was hardly the place known for being able to find restaurants of any kind. However, over the last few years, a new bunch of eateries have popped up around the northeast corner of Vancouver.

One such place that I noticed in my social media feed recently was Dundas Eat and Drink. Located in a tiny mini mall that I remember frequenting when I was in elementary school, Dundas Eat and Drink is a bit hidden from view and isn’t immediately noticeable from the street. Based on their menu that I glanced before showing up, I knew to expect an eclectic array of asian and western fusion dishes.

Not knowing which dishes were best here, we decided to try a bunch of items… first up was the Mango Smoothie ($5.95) and Lime Soda ($3.95). It seemed like they had trouble figuring out how to make my lime soda because you could see them behind the bar struggling trying to get the right balance of ice, soda, and syrup, tasting it (hope they used a new spoon each time), then readjusting and tasting again, over and over… 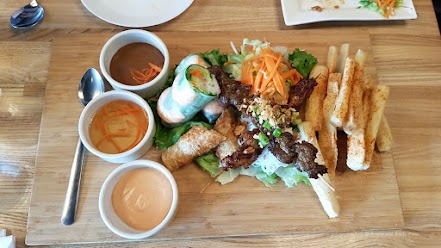 We ordered up the Garlic Butter Wings ($12) but, unfortunately, they wound up giving us Honey Garlic Wings instead. When we mentioned this to the server, she acknowledged that she put in the wrong order and they took this off our bill. When our actual order of garlic butter wings arrived, we looked at them long and hard because they looked very similar to the honey garlic wings. Tentatively taking a bite, we confirmed that they were in fact different (the honey garlic wings being a bit too sweet for our liking) but lacked any real flavour. We also thought the breading that they used with their wings was a bit distracting and just didn’t do anything for the wings themselves. 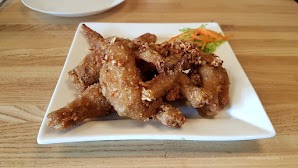 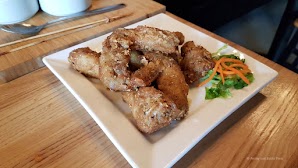 The item that we were looking forward to was their Dundas Platter ($16.75) which comes with a good selection of appies to share: spring roll, salad roll, chicken satay skewer, beef skewer, and cassava fries with a vinaigrette sauce, a peanut sauce, and a house spicy mayo sauce. The best of the bunch was definitely the crispy spring roll while the salad roll seemed to be wrapped too loosely making it difficult to eat as it fell apart easily. The sauces were a bit on the weak side. 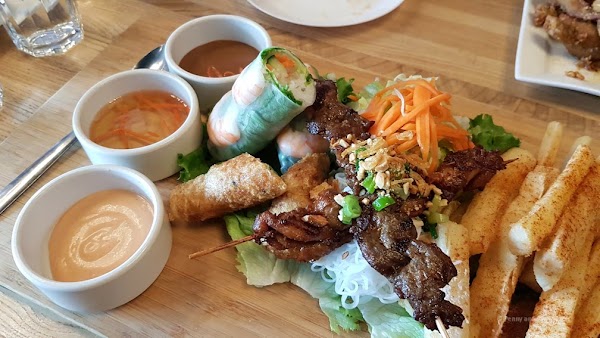 Probably the best dish that we had here was the Pad Thai with Prawns ($14.75) which had a nice amount of caramelization to the rice noodles. 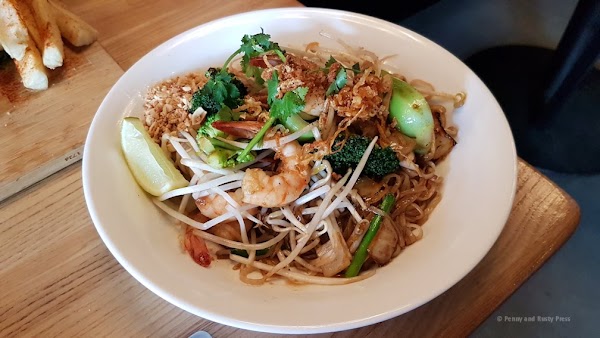 Overall, there were a couple of good items here and a bunch that were just meh given the price.