On the corner of Kingsway and Burlington in Burnaby, it’s difficult to miss the large, turn-of-the-century, Johnson mansion (also known as “Glenedward”) whose main upper floor has been occupied by Sushi Oyama for a number of years. What many people might not remember is that this building once housed a funeral home until the early 80’s… something which has always been the focus of ghostly rumours among those of us that do know of the history of this location.

Under the main elevated floor, there’s actually a street-level “basement” which is accessed from the side of the building but which has mainly been underutilized (I recall seeing a failed karaoke bar here a number of years ago). Recently, I noticed a new cafe open up in this spot and decided to pay a visit in late February. Walking inside, I was surprised at how large and bright the cafe appeared.

As a cafe, you place your order at the front counter and they’ll give you an electronic pager to let you know when your food’s ready for pickup. For my first meal here, I picked the Green Tea Latte ($4.15 12oz) and Salmon Benny ($15). The thing to know about this place is that most of their food is served cold so don’t be surprised when your poached eggs are cold. 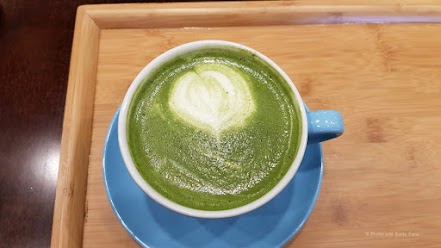 Despite this, the salmon benny wasn’t too bad. Served on a large piece of sourdough bread with white wine hollandaise sauce, raisin cream, and a sweet onion jam, I found that the delicately poached eggs were perfectly runny once you pierced them. They top it all off with a large pile of rocket (arugula) salad so it’s difficult to really see what’s underneath.

The thing that I found on my first visit was that the service was very lacking. There were a number of people working on that day and they seemed very preoccupied with gossiping amongst themselves and they really didn’t pay much attention to the customers. 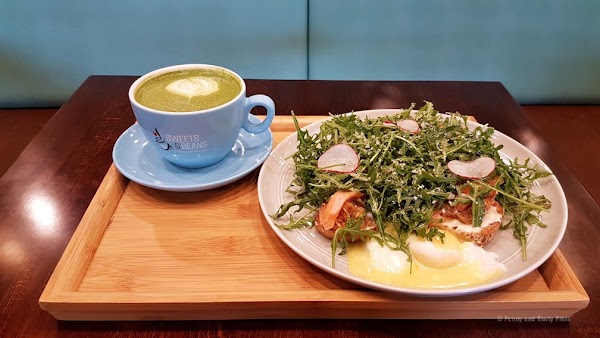 Despite the poor service on my first visit, I returned the following week to try their Wing Tower ($9.99 special on Wednesdays) as well as a Hot Chocolate ($4). As the wings are one of the few hot items served here, it took a while for the wings to come out. For your money, you get 6 large chicken wings (wingtips intact) that are moist and juicy on the inside and awkwardly presented on a large metal skewer (hence the “tower”). The wings themselves weren’t too bad.. they had a very slight amount of spicy heat that built up as you ate it and it’s a pretty fair value when it’s on special. I did, however, find that the wings were overly oily and the oil puddles up on the plate underneath the wings (which can cause the bottom piece to get soggy).

I was also pleasantly surprised that the barista during this visit was much friendlier than the last time around. 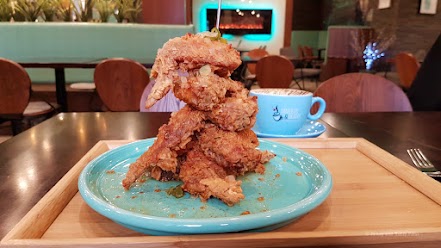 On my third visit, I decided to order the Italian Ham Benny ($13) with a Hot Chocolate ($4 12oz). I had the same friendly barista and she made sure to inform me that the ham in this dish was served cold and if I was okay with that. 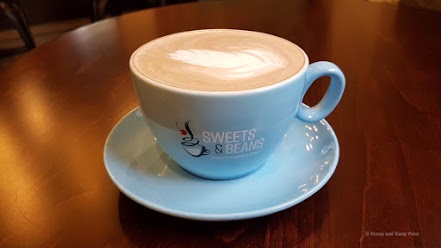 This dish is similar to their salmon benny and is topped with a large portion of arugula salad. 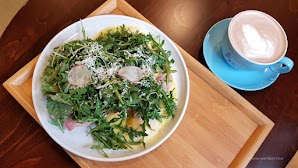 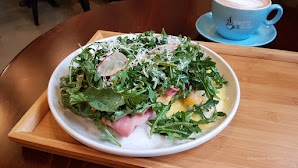 The interior of this cafe is actually quite nice with a number of different dining spaces to choose from. One nitpicky thing that I noticed was that their plates don’t fit perfectly on their wooden trays making the plate wobble as you attempt to eat. If you’re not put off by the cold items from their menu, it’s actually a pretty good place to try out.