Amorosa Pasta House is a long-standing fixture in the Edmond’s area of Burnaby. I believe they used to previously operate an adjoining Greek restaurant called Santali House next door (currently occupied by Sushi Modo) but have since rolled up their Greek menu items into their menu at Amorosa.

I haven’t been here in years (probably 8+ years) but dropped by in early April with some co-workers and ordered the Linguine Tetrazzini. Interestingly enough, Tetrazzini is actually an American dish that was named after opera singer Luisa Tetrazzini so it’s more of an Italian-inspired dish with many different interpretations. 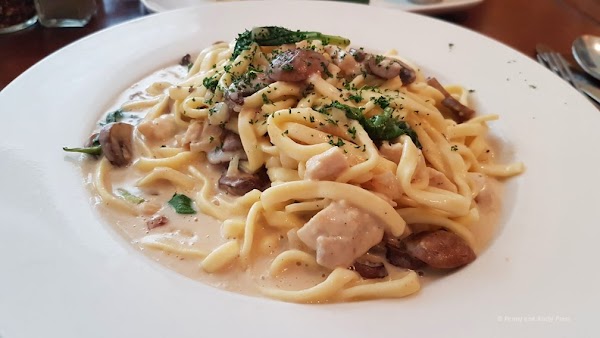 Amorosa’s version is quite creamy with garlic, onions, chicken, spinach, and mushrooms. The pasta reminds me very much like Anton’s on Hastings.