Old Street is a relatively new Chinese eatery which opened up in the former Tokyo Tonkotsu Ramen location on Kingsway and specializes in street food items such as Chinese crepes and Taiwanese beef noodle soups. It looks like they haven’t done too much in terms of interior renovations other than to add the large mural on the wall which explains the type of food that they serve as well as the signage behind the counter.

I’ve had Chinese crepes before and have never been a fan but I thought I’d give them a try anyways. When you’re placing your order, you check off the items that you want and how you want things customized. Each Chinese crepe is made with one egg, green onions, cilantro, and sesame. I opted for the White Flour Crepe ($5.95) and added the HK-style BBQ Duck ($6), Pickled Mustard Greens ($1), Chinese Donut, and with a medium spice level. To that I added the Old Street Fresh Fruit Tea ($5.50). 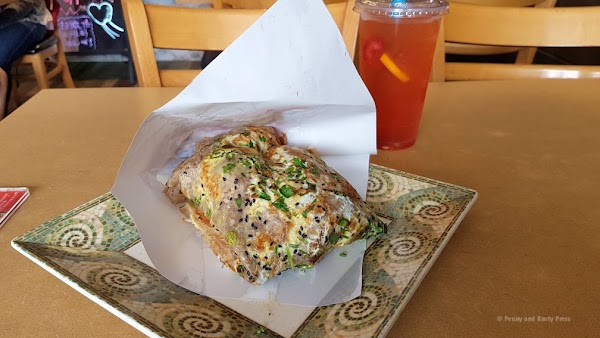 What arrived at my table was a gigantic crepe served up similar to a burrito. The crepe is quite soft and I did enjoy how they mixed in the green onions, cilantro, and sesame in the wrapper. However, it makes it very difficult to eat as the crepe does not hold up well with the amount of filling inside. I think it would have been easier to eat if they took a cue from burritos/donairs which have tighter wrappers. As it was, after a few bites, the whole thing pretty much fell apart. 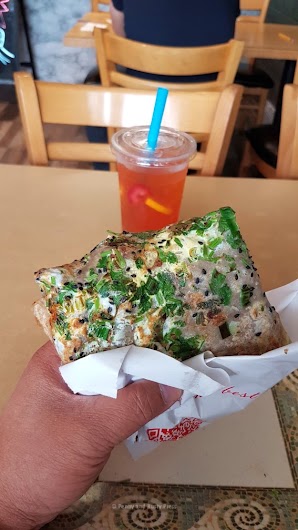 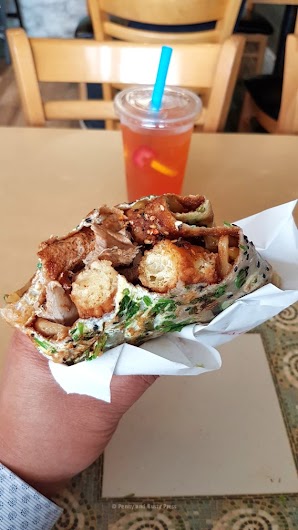 As for the crepe itself, it was just okay. The Chinese donut was quite soft and I missed the textural component of a crispy Chinese donut. While the BBQ duck was meaty, I felt that it needed a bit of sauce to add to the flavour. Plus, I found it to be a bit too salty for my liking. The Fresh Fruit Tea was pretty good but somewhat on the sweet end.

I returned a couple of weeks later to try their House Special Beef Noodle Soup ($12.95) with braised beef flank, tendon, beef brisket, green onions, cilantro, and both veggies and pickled veggies. You have the option of various customizations and I opted for medium spice level and thin noodles. 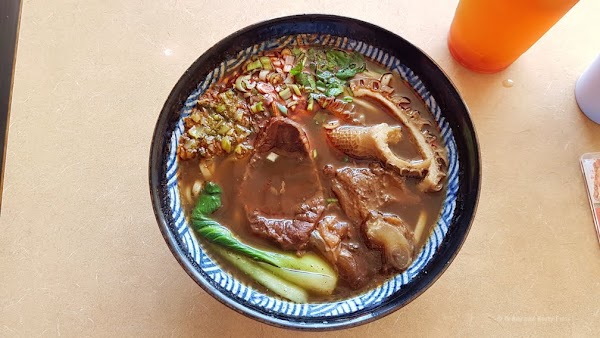 A couple of things that came to mind as I ate this: 1) medium spice is actually pretty spicy here, 2) the “thin” noodles that I requested didn’t really seem very thin (but I haven’t tried their thick noodles so I’m not certain), 3) there was quite a bit of tendon in this dish as well as the addition of honeycomb tripe but I didn’t really see the beef brisket so I’m not certain if the items in this bowl were really correct or if the menu just lost something in the translation, 4) the braised beef flank (along with all of the other meats) were quite tender.