Cafe 106 is a smallish cafe on the corner of Royal Oak and Grimmer in Burnaby. When I first came across the name, I briefly wondered if there were 105 other similar cafes somewhere around town but quickly realized that “106” is their unit number.

Although the interior is a bit small, it’s bright and airy from the light streaming through the windows and they have some toe-tapping light jazz playing in the background. I wound up ordering a creamy 12oz London Fog ($4.45) and a Grilled Tuna Melt ($7.55). The tuna melt was on point with a cheesy tuna filling with red peppers and corn on a crisp ciabatta bun. 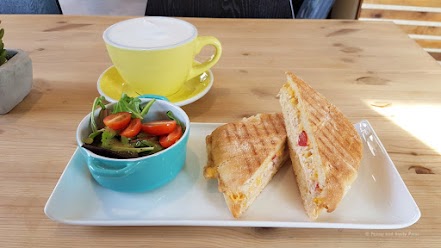 I dropped by for another visit in April and was surprised at how busy it was (as it was fairly quiet during my first drop-in). This time around, I ordered the Basil Pesto Turkey ($7.55) along with a 12oz Hot Chocolate ($4.15) and a Chocolate Chip Banana Bread ($2.80). I was a bit disappointed that my hot chocolate came in a paper cup instead of a mug but I was pleasantly pleased with the banana bread (love the way they made it into a banana shape). There were thin banana slices that were caramelized on the outside which had a nice light crunch to the exterior while the inside was soft and moist. It actually worked well dipping into my hot chocolate. 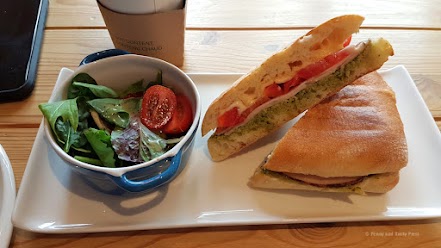 While there was nothing wrong with the turkey melt, I personally think the tuna melt was better. The sandwich had a couple of layers of turkey breast slices, tomato, and cheese on the basil pesto draped grilled ciabatta bun.

Undeterred, I returned for another visit and ordered the Basil Pesto Chicken ($7.55) which is essentially the same as the turkey version but with chicken instead and then paired it with a 12oz London Fog ($4.45) and a chocolate chip cookie for dunking. 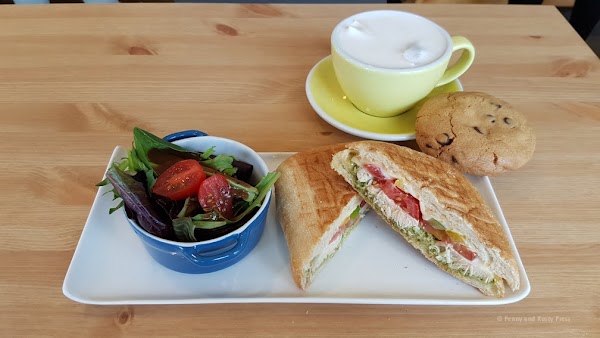