OEB Breakfast Co. is the latest breakfast chain to invade the Vancouver area. Hailing originally from Calgary, they’ve recently opened a location in the Yaletown area in May with plans to open a location around Brentwood soon. If you pay any attention to social media, you probably would have seen the influx of pics from their media event prior to their grand opening. I’m always a bit skeptical when I see all of the great pics – partly because I’m a bit jaded and this ain’t my first rodeo.

Still, I was intrigued enough that I wanted to give them a go so I visited shortly after their grand opening on a sunny Saturday morning. And to be fair, this was their first weekend opening so I’m sure they were still trying to work out all of the kinks and get everyone trained. The space is quite nice and it takes advantage of the large windows that front onto Marinaside Crescent and False Creek. The interior is bright and airy but I’m not a big fan of all of the high tables that they use (not exactly comfortable).

Their menu is fairly extensive and I decided to order their Hog & Scallops ($21) under their Breakfast Poutine menu as well as a Hot Chocolate. Unfortunately, their machine was broken (within the first week) and were unable to get me a hot chocolate (I guess these little hickups are expected initially). Just a note about the name of their dishes… it’s a bit deceiving so be wary. For example, this dish has the word “hog” right in the name so you might expect that some form of pork would factor heavily in the dish. But aside from the bacon lardons bits (which can be found in many of their other “poutine” dishes), there isn’t any pork here. I would have expected some roast pork or larger pieces of bacon/ham… 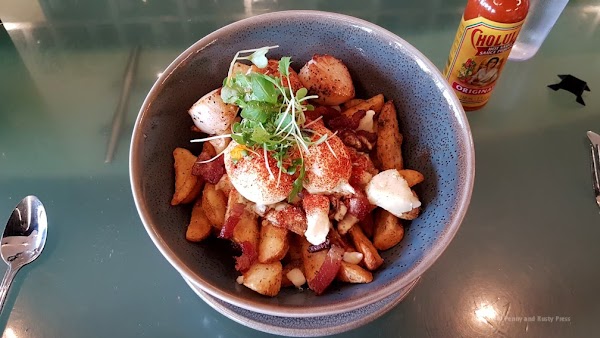 What you do get in this dish is 3 large and plump scallops, the aforementioned bacon lardons, a few pieces of Saint Cyrille cheese curds, and brown butter hollandaise all piled on top of wedge-cut herb potatoes. I originally asked for my eggs to be poached soft but they informed me that their soft poached eggs are very soft with translucent and runny whites and that their medium poached eggs are more like regular soft poached eggs… so confusing, right? I stuck with their medium poached eggs and they had a perfectly runny yolk when I cut into them.

The bowl that they serve this in is rather pretty but one of the unfortunate things is that all of the sauce and runny yolk gets trapped at the bottom of the bowl. While the potato wedges weren’t crispy, I was fairly pleased with them (they are quite filling tho’). 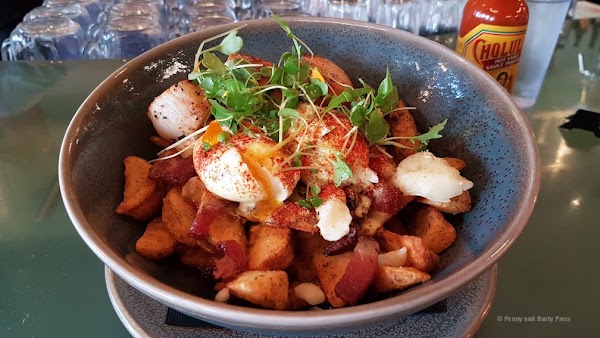 Overall initial thoughts… pricewise, it’s on the higher end of the breakfast spectrum and they definitely have some early kinks to work through including getting a hot chocolate machine that works. Service was friendly, although at times, awkward (again, possibly due to being recently opened). Maybe best to wait for a bit before coming back.

Undeterred, we made a subsequent visit over a month later (figuring they should have their act together by this time). Unfortunately, it seemed the service here was worst than our first visit. We arrived around 9:30am and we fortunately didn’t have to wait to get a table (I’ve heard they have some big lineups here if you show up later in the day). They seemed a bit unorganized at the front (I get it… you’re busy – but a simple smile and acknowledgement would have been nice). After being seated, we were ignored for about 15 minutes while other tables around us were being served. Eventually, they took our drink orders: Hot Chocolate ($4.5) and Mango Juice ($4.75). 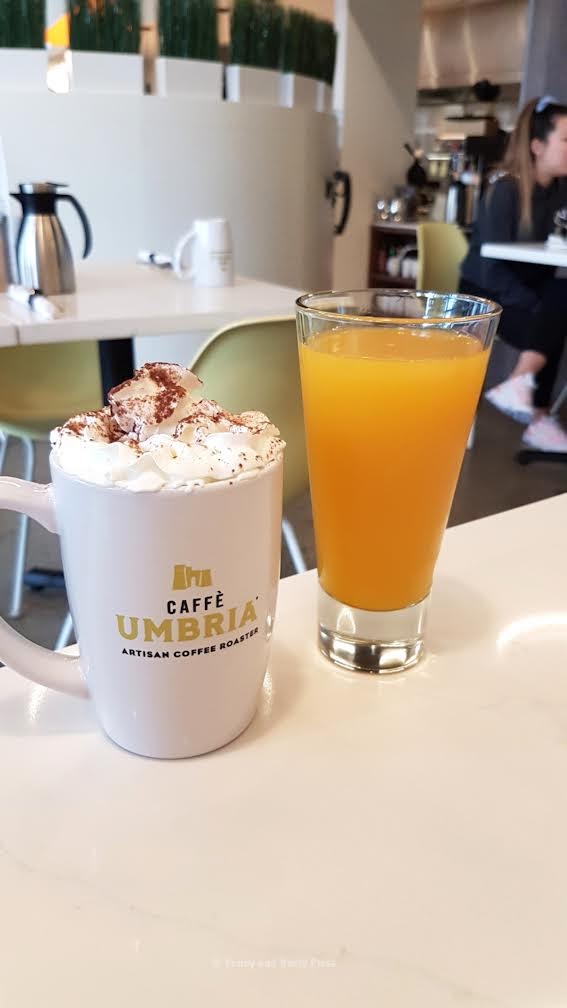 We originally tried ordering the Lobster and Shrimp Crêpes but we were disappointed when they told us they were all out. Strangely enough, the waitress said that they still had the poutine version (which she told us was basically the same thing but on potatoes instead of being in crêpes)… which didn’t really make sense. I mean, if you still had lobster and shrimp available for the poutine, why can’t you put it in crêpes?!?! We told our waitress that we’d need some more time to decide since they didn’t have what we wanted. But then she kept coming back every minute and asking if we were ready yet (I mean, you ignore us for the first 15 minutes now you’re trying to rush us?) 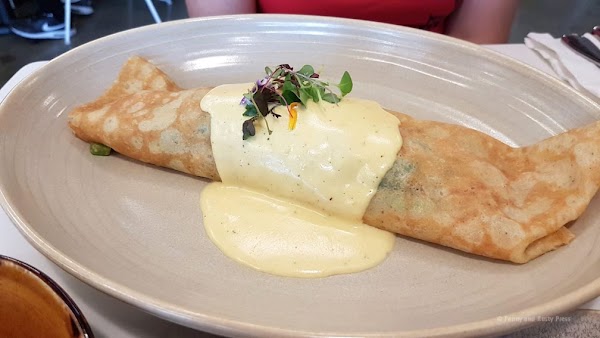 We added some Maple Bangers ($4) as a side for our crêpes. They were eminently better than the side of “fresh” fruit that came with my benny dish. The apple slices looked a bit sad (like they had pre-cut them and left them out too long). And would it have killed you to peel some of the fruit. If you’re looking for a good side of fruit to accompany your breakfast, check out Angelina’s in New West (that’s how you serve a side of fresh fruit). 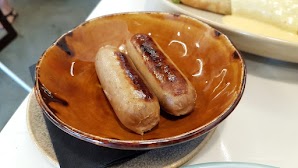 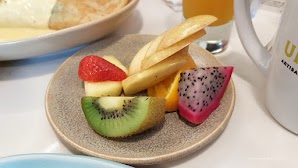 Speaking of the benny, I ordered the Waterfowl ($19). Again with the weird names? I guess I’m just being nitpicky at this point because of all of the fails so far. This dish is supposed to be prepared with smoked Peking duck breast, porchini mushroom-truffle ragû. Just to be clear, this is nothing like “Peking duck”. The smoked duck was quite tough – like chewing jerky. The fries were the best part of this dish but they could have used a bit more crispness for my liking. Also, they should rethink their decision of serving this on a croissant because it gets too soggy for the base of a benny dish. 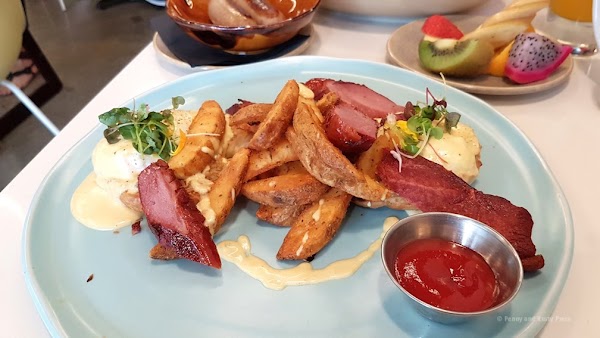 After our last visit, I have to confirm that things really haven’t gotten much better and they suffer the same issues as before. The interior (while bright) has a poor layout and it feels like you’re cramped even though the space looks like it should be big. Service is hit-and-miss and the food is over-hyped for the quality and execution. If they paid a bit more attention to how things taste instead of how things looked, they might do a bit better. We were fortunate that we didn’t need to wait in line to get in but we definitely wouldn’t wait in line for this place.