I’m never one to pass up a good breakfast so I’m always on the lookout for a new breakfast spot… especially if it’s located in an area that is sorely lacking in morning eateries. Ham & Eggman’s is located on Rupert Street, in the former location occupied by Aburi King and right next to Penang Delight Cafe.

I visited back in May of this year. Having just opened a few months ago, there was still a lot of remnants of the former tenant… including the Asahi pitchers that they use for water and the same somewhat dark interior (they do have some natural light in the front of the store from the large windows). On this visit, I sat at the large, live edge wooden sushi bar in the back which affords you with a view of the kitchen.

The breakfast menu is a bit limited and I wound up ordering the Chicken and Waffles ($18) as well as a cup of Mighty Leaf Tropical Green Tea ($3). I’ve seen pictures online of a brunch menu but I’m not sure when that’s offered. They did have a special on the menu during my visit (huevos rancheros) but they failed to inform me about it… I just heard about it after when the waitress mentioned it to another diner. 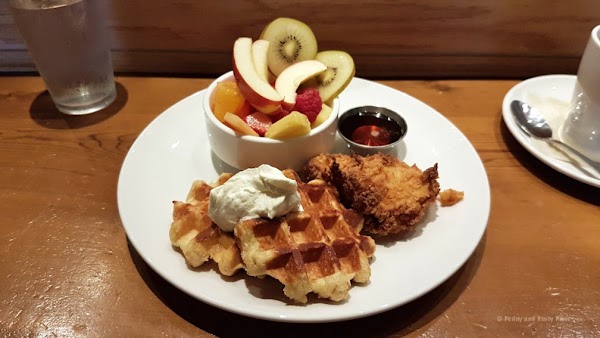 The food isn’t exactly fast (think it came out after about 20 minutes so not too bad). They had two cooks working in the kitchen during my visit – one with a rather large white Santa-like beard. The thing that I liked was the accompanying fresh fruit bowl which was quite generous and had slices of apple, strawberry, raspberry, kiwi, watermelon, honeydew, cantaloupe, pineapple, and orange.

The waffles themselves were pretty good with a nice crispness to the exterior and the boneless chicken was coated with a buttermilk batter which gave a nice crunch (although the batter fell off a bit).

Overall, it’s nice that there’s a new breakfast joint in town and the food’s pleasing. It would be nice to see a few more items on the menu (or at least to hear what the specials are before you order).