It’s been literally years since I first visited Wild Thyme. I recall it was just after they opened and it was a small little hole-in-the-wall joint which served up some classic Lebanese cuisine. Since that time, they’ve expanded and now have a more spacious dining area next door. They don’t have air conditioning but they do open the large windows in the summer.

I’ve finally made it back to visiting Wild Thyme but part of the reason why I haven’t been back sooner is that they are only open on the weekday lunch hour on Fridays. On my first revisit in years, I decided to order their Makanek and Kashkaval Cheese Man’oushe which came with a Fattoush Salad ($20.95). This is a dish that I’ve ordered previously and basically resembles a flat-bread pizza made with Lebanese sausage and cheese.

But first to arrive at the table was the salad… and oh what a salad it was! Mixed veggies and greens with a pomegranate molasses dressing. It’s a rather large salad that’s big enough to share or to serve as a meal in itself. 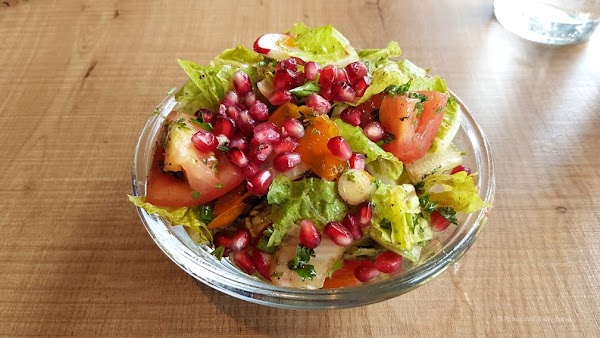 The flat-bread takes a bit longer to come out and is quite large and I wound up bringing over half of it home with me. I do have to admit that I think the one that I had here years ago was a bit better (both in the presentation and the execution). Still, this is a nice flat-bread. The main issue with it is that the flat-bread is quite thin and doesn’t support the toppings so it can be a bit messy to eat. 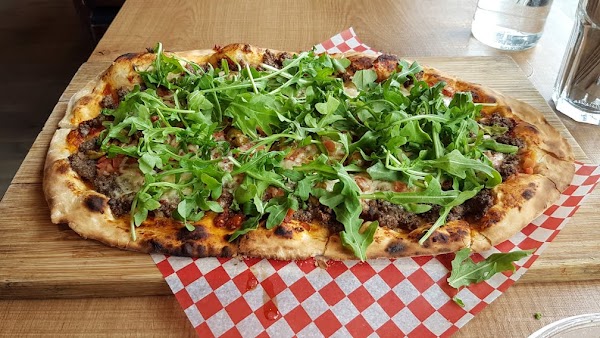 I dropped by again to have their Half and Half Beef Kabab and Chicken Taouk Wrap which, unlike most of their other items, is meant for 1 person. Served on an open-faced pita with parsley, onion, tomatoes, tahini, cucumber, pickles, and sumac, this is a truly epic wrap. The sumac gives it a slightly tangy lemon flavour but not overly so. The filling is very generous and you have to be a bit brave to attempt to eat this without a knife and fork as the filling is literally overflowing when you try and fold the pita wrap. Quite flavourful and fairly tender proteins in here. 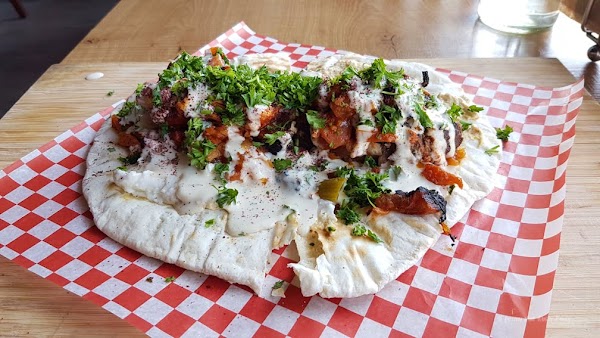 Eventually, I returned to retry one of their main courses. The Half Kafta – Half Chicken on Rice is similar to the wrap that I had earlier but it’s served with seasoned long-grain rice and baked in their brick oven. At $34.95, the full size offering is a bit expensive but this is more meant to be shared between 2-4 people (you can get a smaller half-size version of this as well) and comes with pita, dips, and salad.

First up is a full-sized order of their fabulous Fattoush Salad. Love that slightly tart pomegranate dressing. 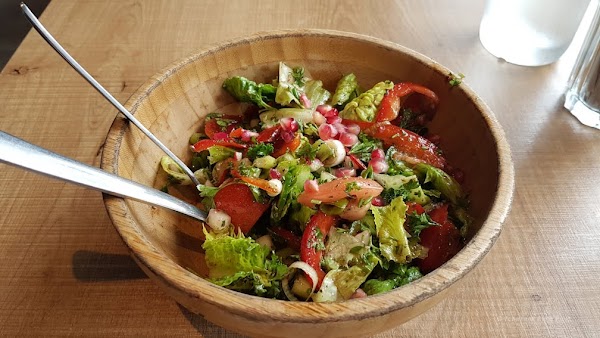 The pita bread is HUGE! It was also so light and puffy (looked like a balloon when it arrived at the table. Can’t remember exactly what the different dips were but I think it was baba ganoush, hummus, tahini, and something else. 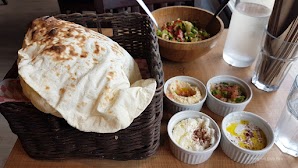 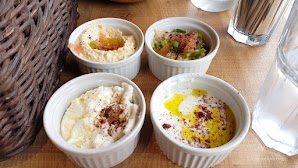 There was no way that I was going to be able to finish this dish so I wound up bringing most of it home with me. As before, the beef and chicken were well seasoned and tender and the onions, tomatoes, and tahini sauce went well with the rice. 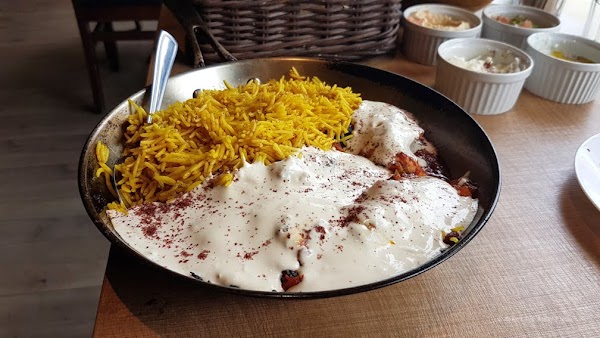