Tai Tung is a Cantonese-style restaurant located in the Marpole area of Vancouver that we visited in late February. The thing that struck us the most about our visit was how quiet it was for a Saturday morning. Usually, that’s a bad sign since most of the good dim sum places are really busy on the weekends. Perhaps we were just here really early? 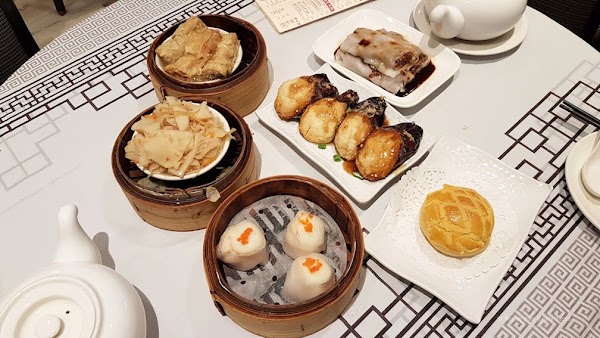 There seemed to be a hushed silence from all of the diners this morning (something unusual as I always associate dim sum with a loud din from the elderly diners yelling to each other and babies crying). In any case, we were here for the food… and most of the dishes arrived around the same time. The first dish to arrive was the Tai Tung Specialty Baked BBQ Pork Buns ($5.35). This was soooo good! Freshly baked, the slightly sweet filling was still warm inside and I really appreciated the sweet cookie-crumble pineapple-bun topping. 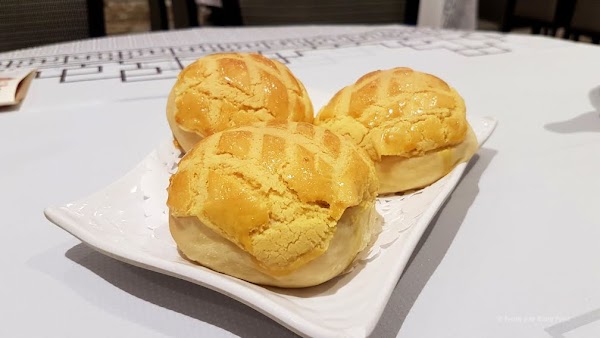 Most of the dishes are exactly how they are described… such as the Steamed Scallop and Prawn Dumpling topped with fish roe ($6.95). 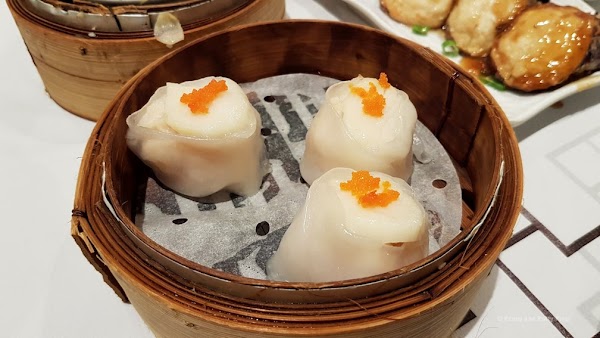 Something that I really appreciated was the fact that the waitress properly cut the Fried Eggplant with Shrimp Paste ($6.95) for us, ensuring that each piece had both eggplant and shrimp paste in it. 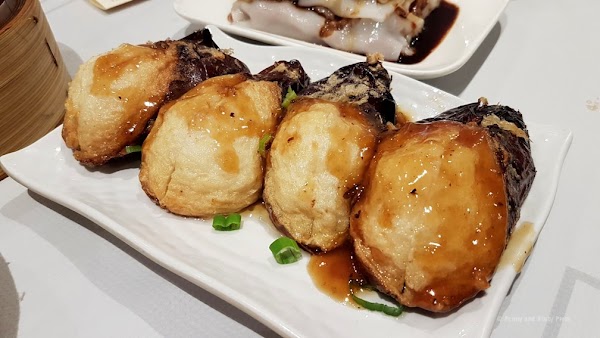 The filling of the Steamed Beef Rice Roll ($6.95) turned out quite well with a nice fresh and aromatic hit from the cilantro in the filling. 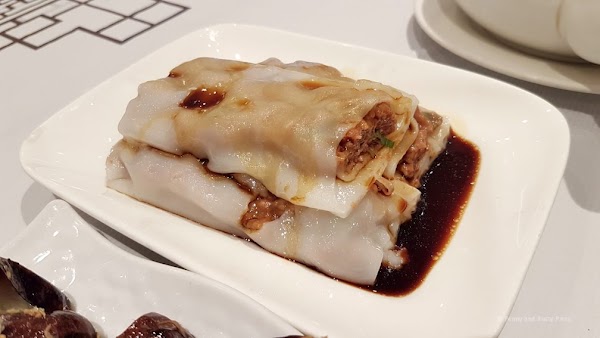 Although not the most visually appealing dish, the Bean Curd Wraps with Meat in Oyster Sauce ($5.35) had an interesting texture with the addition of crisp veggies to the meat filling (think it was celery?). 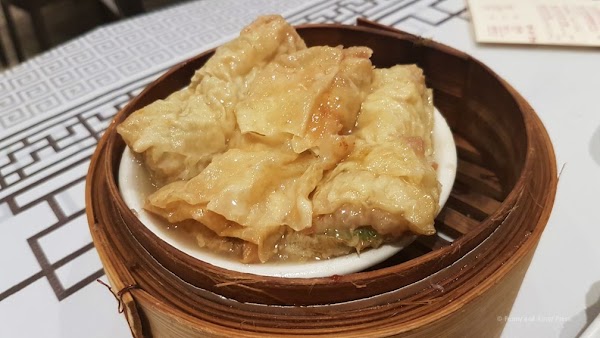 And last up was the Beef Omasum with Ginger and Onion ($5.95). The otherwise delicate flavour of the bible tripe was enhanced by the addition of ginger. There were a couple of pieces which could have been cut a bit smaller (as omasum tends to be on the chewy side with a certain degree of difficulty in biting through). 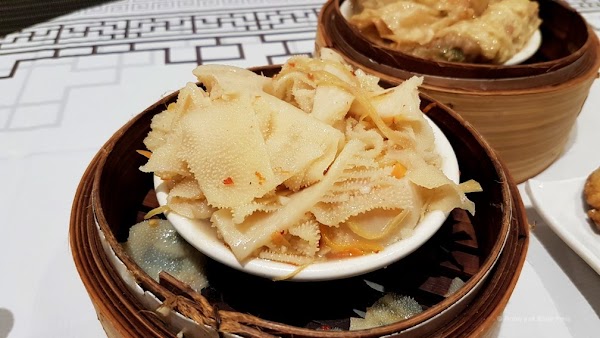 Overall, we were fairly pleased with most of the dishes here (we even took home an order of country-style rice noodles which turned out really great). Prices lean a bit towards the expensive side but they offer 20% discount off weekday mornings if you pay cash. Otherwise, they do accept credit cards. We were in luck that we showed up early because the noise level did eventually rise as more diners showed up later in the morning.

It was almost half a year later that we returned for a revisit. This time, we started with the Chinese Donut Rice Roll ($6.95). Honestly, I thought there was something off with the texture with this dish and I was also surprised that they don’t normally give you the dipping sauce (hoisin and peanut sauce) that we normally get at other restaurants. 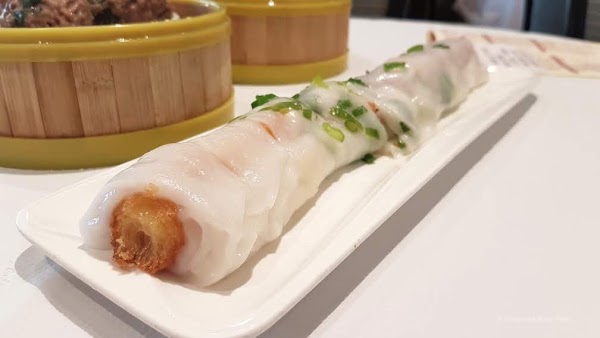 Next were the Chicken Feet ($5.95)… a bit standard. And then the football-shaped Deep-Fried Dumplings ($5.95) with shrimp and pork. 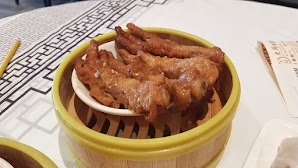 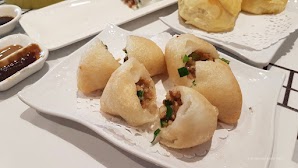 One of the best dishes during this visit was the Beef Meatballs with Tangerine Peel ($5.95). Plump, juicy, and meaty with a nice hit of tangerine. 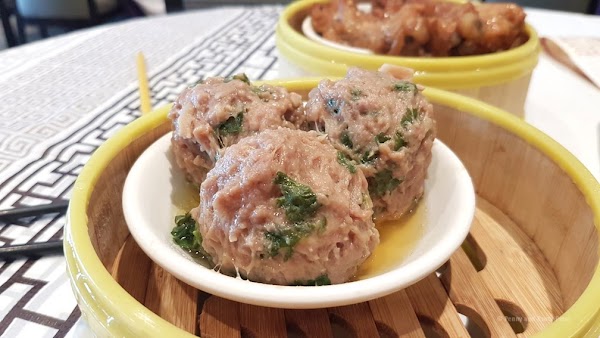 And, of course, we couldn’t come back for a revisit without ordering the Tai Tung Specialty Baked BBQ Pork Buns ($5.35). 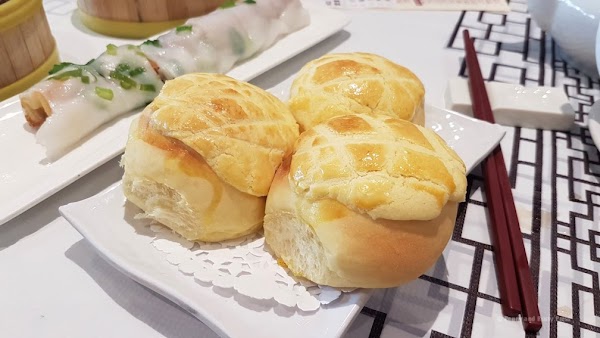