Amaranthus: Vegetarian at the Quay

Recently, a new plant-focused restaurant opened up in the River Market area at the New West Quay, taking over the former location of Freebird Chicken. Helmed by the team that opened up El Santo in New West, this restaurant strives to provide vegetable-based cuisine that’s more than just your ordinary salad.

On my first visit here in June, I opted for their Fried Brussels Sprouts ($11) and Lemonade ($4). The dish is actually quite large and there’s plenty of caramelized Brussels sprouts in the dish along with gremolata (a mixture of chopped herbs), pumpkin seeds, hummus, and caramelized onions. To top it off, they add a poached egg on top that bursts open when poked and coats the greenery with a nice yellow hue.

While the addition of the egg might not make this dish vegan, it is actually quite enjoyable and might make a carnivore like me rethink Meatless Monday. 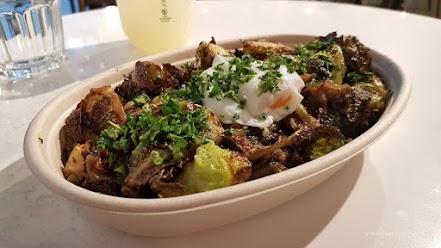 I returned in mid-June to try their Fig and Wilted Radicchio ($12) and Lemonade ($4). I was a bit worried at first because it didn’t sound like it would be enough to keep my full but this actually turned out to be a nice salad. The brûléed fennel gives it a bit of crunch and the wilted radicchio still retains a light crunch to the bite. The honey balsamic dressing is not overly sweet and the basil adds to the aromatics of this dish. 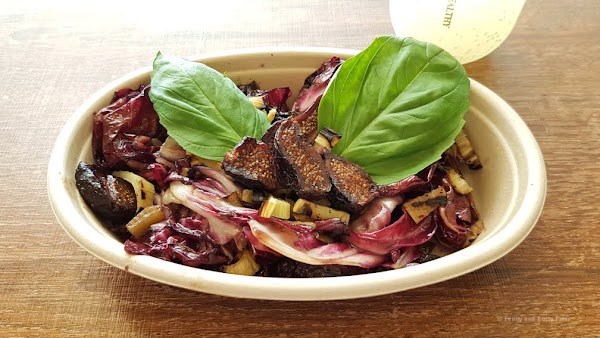 I came back in August and ordered their Fried Brussels Sprouts again ($12) and paired it with a Rhubarb Rosewater Lemonade ($6). Prices seem to have gone up a bit since my first visit but I do really enjoy their Brussels Sprouts… especially how the caramelized onions and gremolata pairs with the fried Brussels. Simply lovely runny yolk from the poached egg cascading over as well. 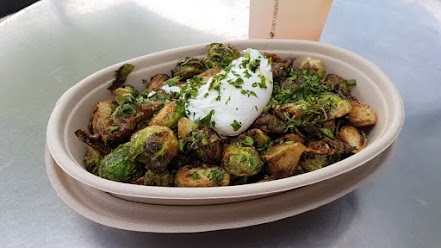