Tuesdays are meant for tacos! Well, pretty much any day is meant for tacos. The Taco Factory is a newish spot in New Westminster where you can grab some aforementioned tacos (in addition to other Mexican fare such as tortas, burritos, and tostadas).

I visited in mid-July when I ordered their 3 Tacos ($11) which comes with crispy taters and your choice of tacos (I picked the Carnitas, Barbacoa, and Chorizo). The tacos are served on double 4-inch tortillas and garnished with white onions and cilantro. The pulled pork was super juicy and was definitely the best of the bunch (whereas the chorizo was a bit dry). But let me just say that the taters/potato nuggets on my first visit were amazingly crispy on the outside and soft on the inside (unfortunately, they were never quite the same on any of my next visits). 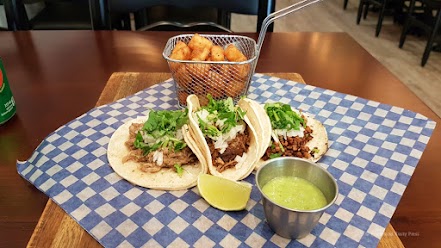 A couple of weeks later, I came back to try their Carnitas Burrito ($10) and paired it with a Pineapple Jarritos. I stuck with the pulled pork because I liked it in their taco – the filling also includes Mexican rice, black beans, lettuce, slice jalepeno, rachera sauce, sour cream avocado, and mayo. Sure enough, it was just as good in the burrito as it was in the taco. However, I did find that the burrito was super oily and a greasy pool of oil ended up soaking through the parchment. As previously stated, the potato nuggets were just okay on this visit and weren’t as crispy as it was on the first occasion. Note: 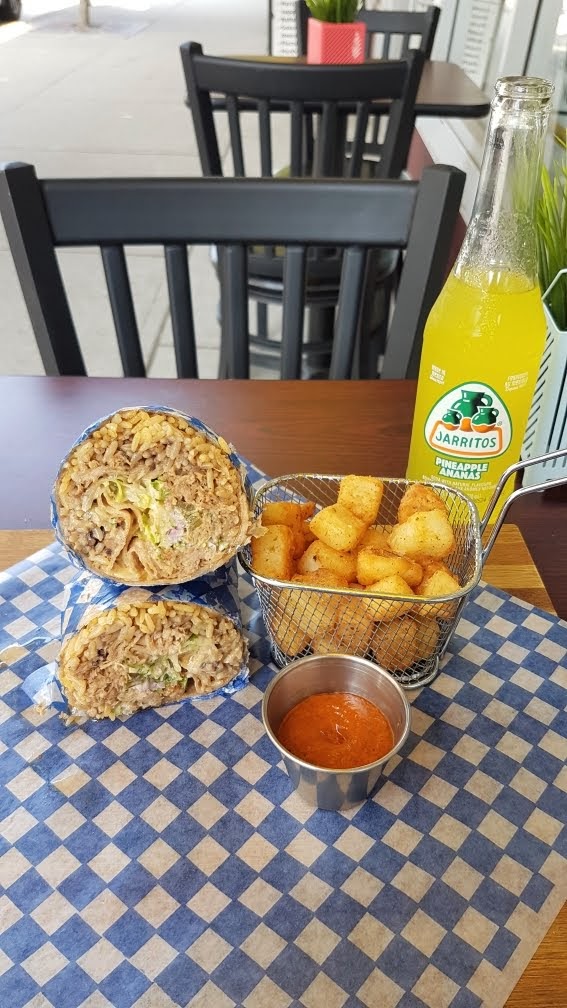 In mid-August, I returned to try their Pollo Asado and Barbacoa Tostadas ($10.50) which are similar to tacos but come served on 2 fried 6-inch corn tortillas and garnished with sour cream, lettuce, cilantro, and cheese. The grilled cubed chicken (pollo asado) was pretty good and actually relatively easy to eat despite how much toppings were served on the tortilla. The chunks of lamb in the barbacoa were quite juicy and, hence, very messy to eat as all the juices started to drip everywhere. Definitely not the item to pick if you have issues with getting your hands a bit messy. This time around, my meal came with a side of crinkle cut fries – normally, I love crinkle cut fries but I found these to be a bit too fried and the inside of the fries weren’t soft enough. 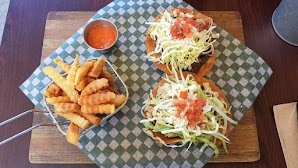 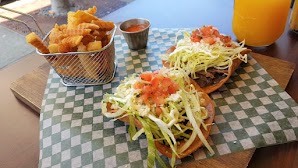 Another couple of weeks passed before I returned to try their Chicken Flautas ($9.99) with a Mango Jumex Juice. A flautas is basically a taquito or rolled-up taco that’s been fried up. The shell was super crispy and the toppings made this a bit of a knife-and-forker. Overall, I thought the chicken inside the flautas was a bit dry but probably to be expected since it’s fried in the shell. 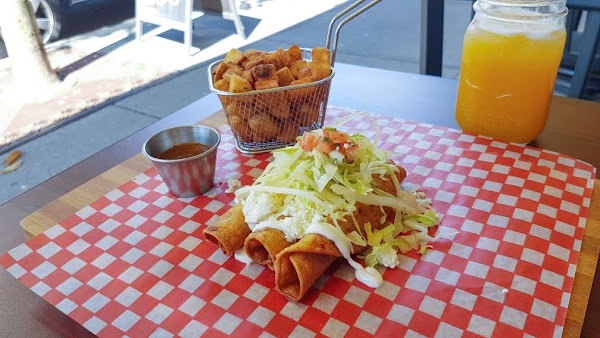 In early October, I returned to try their Carnitas Sopes ($10). This is an item that I’ve never had before and I wasn’t entirely sure what to expect. It visually looks similar to fried tostadas but it’s really not the same. The sopes reminded me of little tart shells that are thicker on the bottom and with crisp edges. The shell actually makes a good holding container for the filling and it’s easier to pick up and eat when compared to tostadas. As it’s fried, it is a bit oily and you have to watch out for the juicy pulled pork filling but this was one of my favourite items here. 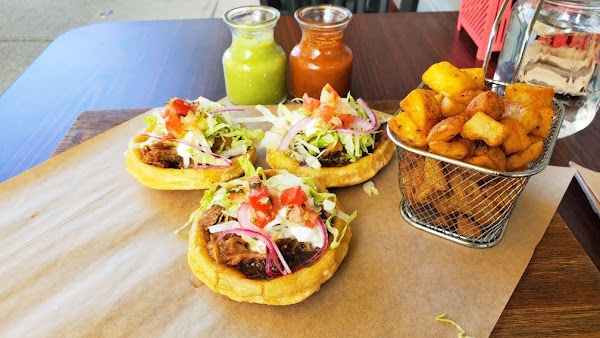 So, overall, there’s more than just tacos here and well worth a visit.