De Dutch Pannekoek House has been a staple in the Columbia Square complex in New West for a number of years but I never found a reason to drop by here until recently, when I discovered my planned destination was closed (that actually happens to me more frequently than I care for).

The interior is a bit tired but relatively clean and what you’d expect of most chain breakfast joints such as Ihop or Denny’s. I decided to order their DeBakon Avocado Benny ($16.25) on rusk with fruit. For those unaccustomed to “rusk”, it’s a Danish staple made with double-cooked toast that resembles hardtack and is quite dry and crumbly. Because of this, I ordered my eggs to be poached soft, so the runny yolk would be able to offset the dryness of the rusk. 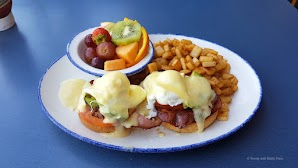 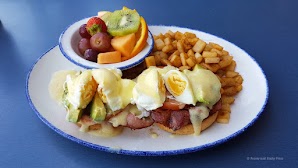 Unfortunately, what arrived at my table was what could only be described as a hard boiled egg. I could tell immediately when my knife touched the centre of the egg that it was way too firm for a soft poached egg. I mean seriously? It couldn’t have been any harder if it was on Viagra. While I’m not one who usually sends back food… I just had to in this case.

My replacement dish (which did arrive fairly quickly) was much better and had a soft poached egg that yielded the requisite runny yolk to coat my rusk. As for the rest of my meal, the potato hash was okay but lacked crispness to the exterior (I like my hash a bit crispy) and the fruit wasn’t as fresh as what you get at Angelina’s nearby. 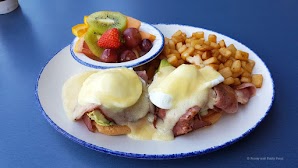 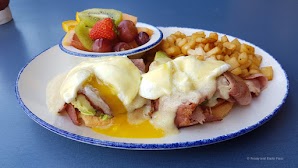 Overall, the rusk probably wasn’t the best choice but I’ll take ownership on that one. I decided that I should probably come back for a revisit to see if the issue with the egg was just a one-off thing. This time, however, I opted for one of their signature pannekoek (a thin, Dutch-style pancake which can either be served sweet or savory).

The Boer Pannekoek ($20.75) roughly translates to “Farmer’s Pancake” and is a hearty meal comprised of ham, bacon, sausage, hash browns, and eggs on top of the pannekoek. I’ll give this for them… they really know how to make a pancake. It’s a very thin and soft pancake – almost like a creamy crepe. The eggs this time, had a nice runny yolk and crisp edges and the ham and bacon were on point. The only things that I thought needed more work in this dish were the hash browns (not crispy) and the sausage (seemed too much like a hot dog). It’s not really a cheap breakfast but it is quite filling. 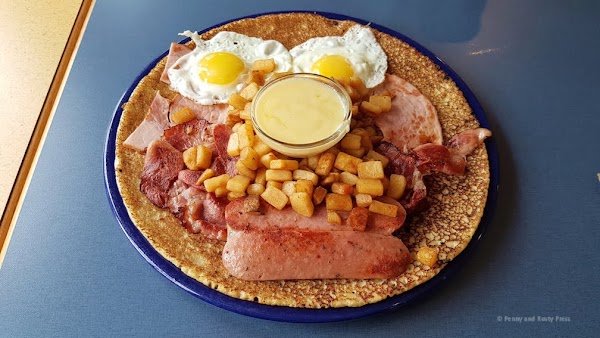 On my next visit, I picked a dish which isn’t normally associated with Dutch food… the Chorizo Quesadilla ($17) made with black beans, cheese, onions, corn, and quinoa filling and served with a lemon and avocado cream sauce as well as salsa. For my side, I picked the kettle-cooked chips and dip. The best part of this dish has to be the kettle chips in my opion… a nice crispy/crunchy bite to the chips (the dip was very similar to tartar sauce). The quesadilla was what you would expect from a place that doesn’t specialize in Mexican food… I thought the addition of the quinoa in the filling was a bit of an odd choice and the sliced/diced chorizo sausage was a bit lacking (wish they used crumbled chorizo instead). 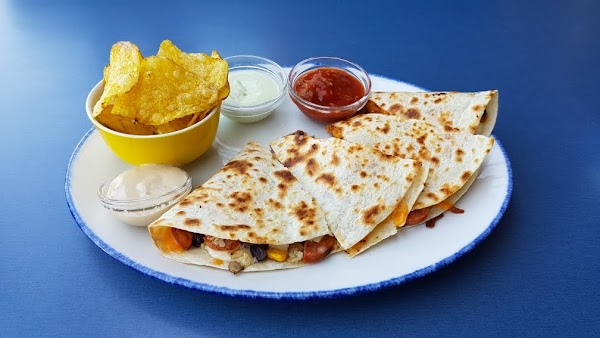 Overall, very hit-and-miss here. If you do visit, go for the pannekoek.