Recently, I noticed that a new restaurant opened up on Edmonds Street called Lualu Kitchen. The interior is a bit spartan but clean and they use outdoor patio furniture chairs inside.

I ordered the Chive and Pork Dumplings ($10.99) on my first visit. I originally wanted to try their stuffed chicken wings but they said that it takes a while to prepare it. The boiled dumplings had a good filling and they had soy sauce, vinegar, and chili tableside to spice up the flavour of the dumplings. 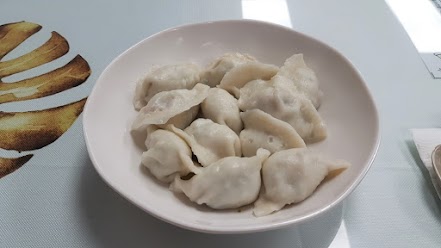 On my second visit here, I tried their Chongqing Style Noodles ($8.89 plus $3.89 for added braised beef shank). The braised beef shank was quite tender but it was served cold and I needed to dunk it into the hot broth to heat it up. Speaking about the broth… it was quite spicy and I could feel my chest radiating heat after I finished it. You know, the kind of spiciness that clears your sinuses and makes you want to sweat. In any event, the noodles were actually quite good and had a very tender texture.

Overall, the menu is pretty limited (but that might be because they’ve only just opened). I’ve been trying to order their stuffed chicken wings but they never have it when I show up. Note that it’s also cash or debit only.