Those of you who have been paying attention to social media over the last year have probably seen the pictures of chocolate babka slices from Kozak Ukrainian Eatery located in New Westminster. Well, their much awaited shop in Vancouver finally opened earlier this year (after a few delays) and we just happened to be walking by one snowy day in January so we picked up a few items to go.

While we didn’t eat these items in the bakery, I noticed that they had a much larger dining space at their Victoria location compared with the cramped settings in New Westminster. Aside from the Chocolate Babka ($3.50 per slice), we also grabbed a Wafer Tort ($1.75), a Cheese and Green Onion Roll ($3.50), and a Pletenka with Cinnamon ($3.50). 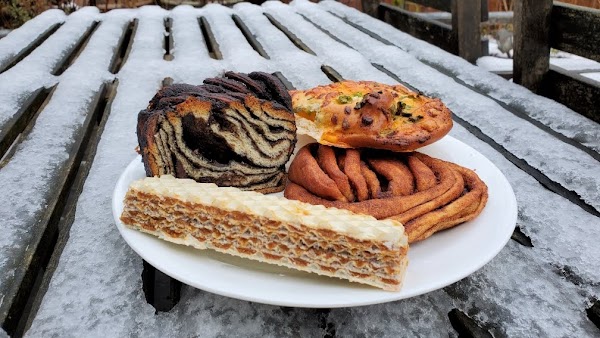 Of course, the chocolate babka is always a winner when we visit with the cinnamon roll not too far behind. I was disappointed with the wafer tort which has layers of condensed milk cream in between the wafers… I felt that the wafers themselves weren’t crispy so it lost the textural component that I was looking for.