Queen’s Cafe by Eighteen Chefs: How Long Will it Last?

The corner of Kingsway and Salisbury in Burnaby seems like the perpetual Bermuda Triangle for restaurants… it never seems like any restaurant can make a go of it in this location.

Previously Queen’s Cafe, and after many lengthy delays, the latest restaurant to grace this property opened up calling themselves Queen’s Cafe by Eighteen Chefs (Eighteen Chefs being a popular Signaporean chain). I visited in early December when I tried their Hainanese Chicken Rice ($16.80) which comes with bone-in chicken, soup, and rice. While the soup was quite bland, the rice was moist and flavourful (although a bit too salty due to the soy sauce). I also found there wasn’t much meat as it was mainly bones. 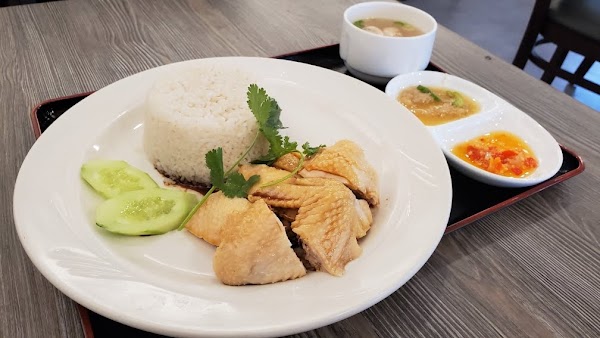 On my next visit, I decided to try their Chicken Skewer with Truffle Udon Noodles ($11.80). They told me it takes about 15 minutes to prepare because it’s all made fresh. To be honest, this was surprising good… although it was a bit difficult to eat given the way it was presented. The chicken had a good char on it but the meat was still tender. Meanwhile, the noodles were tender and toothsome with a good chew. The only bad thing I have to say about this dish is that it was a bit too oily and, again, too salty. 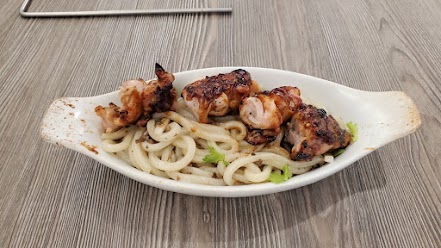 By my third visit, I began to notice that the service seems a bit awkward… that’s not to say that the server wasn’t friendly… it’s just that her whole demeanor and presence was just a bit off. Anyhoo, I ordered the Mee Siam ($12.80) and found it to be quite spicy. The bowl of rice vermicelli comes with tofu puffs, 2 shrimp, and an egg. Seriously… this dish is not for the faint of heart as you’ll feel the heat from the full-bodied soup. 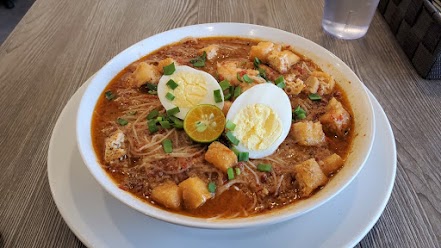 The last dish that I tried here was the HA Fried Rice with Spring Chicken ($15.80) which comes with garlic chili sauce – I think “HA” is supposed to stand for “Heart Attack”. The chicken had nice crispy skin, which I think was the best part. Oddly enough, I found the fried rice (which seemed more like sticky rice) was kind of weak and plain. 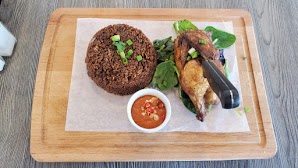 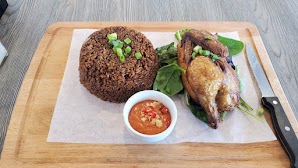 Overall, I found the menu to be fairly limited but some items (such as the chicken skewer with truffle udon noodles) were pretty good. Still, prices seem a little bit high for the quality.