A couple of years ago, I noticed that a new Banh Mi placed opened up in the former haunts of Tung Hing on Kingsway but it hasn’t been until recently that we were able to try out Bean Banh Mi. I was a bit intrigued by their name because I don’t normally associate beans with banh mis. However, I did quite enjoy watching the episodes of Mr. Bean that they had playing on the overhead tv screen while we waited for our orders to come up.

We picked the 2 Can Dine Combo ($12.50) with your choice of any 2 banh mi as well as veggie or meat spring rolls and opted for the Tri-Meat and Pork Patty Banh Mi. The first thing that I noticed was that the bread, while baked fresh and crusty on the outside, was a bit oddly shaped and a bit too bready on the inside for my liking. 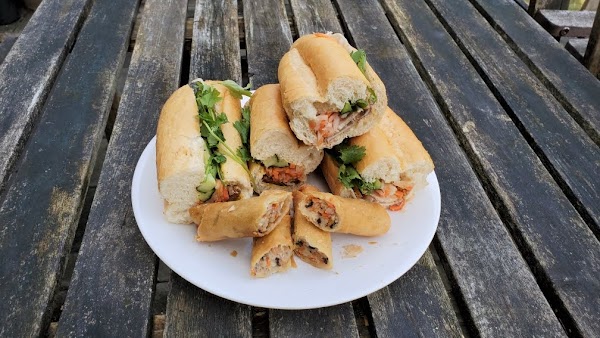 Overall, I found the banh mi to be a bit different than the typical banh mi that I find at many other Vietnamese places (which I guess shouldn’t be a big surprise since they label themselves as a modern Vietnamese sandwich shop)… not saying that it’s bad… just different. But if you have a hankering for some classic banh mi offerings, you probably won’t find that here.