Despite spending my formative years around The Drive, I don’t really make it out here much anymore. During one early January morning, I found myself in the neighbourhood and decided to check out Tangent Cafe, which is located a bit further south down Commercial Dr.

I decided to take a seat at the bar and ordered the Smoked Meat Hash ($16) with a Hot Chocolate. The hash consisted of hash browns, smoked meat, red bell peppers and onions all shredded up and pan-fried then topped with 2 fried eggs. It wasn’t bad but the hash brown potatoes could have been crisped up a bit more and I felt they needed more onions and seasoning. I think I would have preferred it if the Montreal-style smoked meat wasn’t as finely hashed to add some textural contrast. That being said, the egg yolks were nice and runny and soaked up nicely in the hash. I also quite enjoyed the chewy texture of the dark rye that came with my meal. 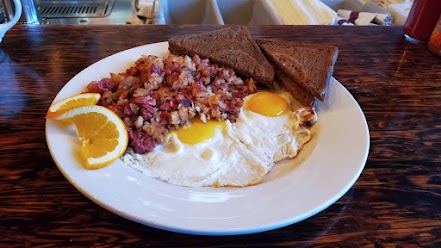 A few things on the downside were all of the sticky ketchup and hot sauce bottles. They also didn’t bother to check in on me at all during my visit so service could have been friendlier.