Earlier this year, Pokey Okey opened up on Kingsway, near Metrotown so I decided to give them a visit in March. When I first walked inside this small little shop, I immediately noticed the large chalk board wall that’s adorned with messages from previous clients. I also noticed that they don’t have anywhere to sit to eat in here (this was before the whole coronapocalypse shut down dine-in eating). They did have some counter area along the wall where you can stand and eat however.

I decided to try their Medium Bowl ($13) and picked scallop, tuna, and spicy tuna for my proteins and adding red cabbage, imitation crab, edamame, pickled ginger, and crispy onions to top things off along with sesame sauce. 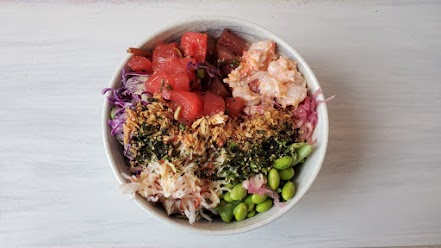 A few thoughts… there weren’t a huge number of options for your poke but it did turn out to look like a nice bowl. As I decided to dine-in, they gave me my poke in a ceramic bowl which was a nice touch (although I later had to have them transfer it to a take-out container as I didn’t finish it). They had chopsticks but I think it would have been better if they also had forks/sporks as an option. I wish that the poke and sauce was more mixed before serving because the flavours didn’t mix up well and it’s difficult to mix things up with chopsticks.