Manjal South Indian Kitchen is a newish restaurant that opened up along Edmonds Street recently that focuses on South Indian cuisine. When I dropped by for lunch on a weekday in early February, the place was practically dead but there’s been a lot of construction going on along Edmonds so that might explain the lack of people.

In any case, I decided to order their Lamb Kothu Parotta ($15.99). Never having kothu or parotta before, it sounded kind of interesting. Basically described as a street food item consisting of coarsely chopped up parotta (no, it’s not a type of bird)… parotta is a type of layered flatbread (similar to a layered roti). 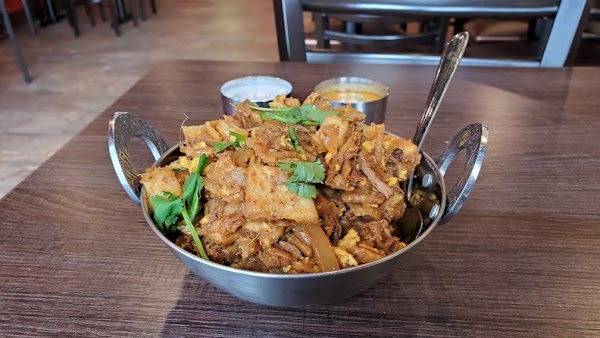 I actually liked this quite a bit. It’s served with raita and some type of gravy and the spice level which I picked (medium) wasn’t overly spicy. The dish kind of reminded me a bit of stuffing or rice cakes with a thin and somewhat chewy texture to the chopped up parotta. The shredded lamb was okay but I think I would have preferred if it was a bit more chunky in terms of the protein. It’s actually pretty addictive and I can see why it’s a popular street food item.