Royal Pho Restaurant is a Vietnamese restaurant that’s located in Champlain Square. As we don’t have many Vietnamese places nearby, we stopped by to grab some take-out in May.

Most of the items were just average with the fish cakes and the wontons probably being the best. I did, however, find that some of the crispy wontons appeared to be overcooked. I was originally thinking the chicken sandwich would be a traditional banh mi but it’s literally a western chicken sandwich with no resemblance to a banh mi other than some pickled carrots and daikon (the bread was way too soft).

The salad roll was okay but they made it open on both ends so everything was falling out. And, while the spring roll pretty good, the marinated pork was just a bit too tough. 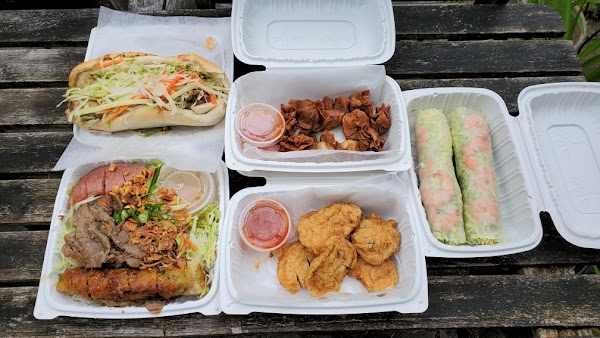 Overall, fairly average eats with a price that is somewhat higher than what you’d expect for the quality (similar to nearby 54 Ave Cafe). Given the lack of Vietnamese places in the immediate area, this might do in a pinch (otherwise, head over to Victoria Dr. where you’ll find more options available).