The first time we tried Peaked Pies was in Whistler many moons ago. Since that time, they’ve actually opened a couple of shops in the Vancouver area. It was at their most recent location in the Burnaby Heights area of Hastings Street that we recently visited in July. This location is quite pretty and spacious (especially compared to the tiny shop that we first visited in Whistler). 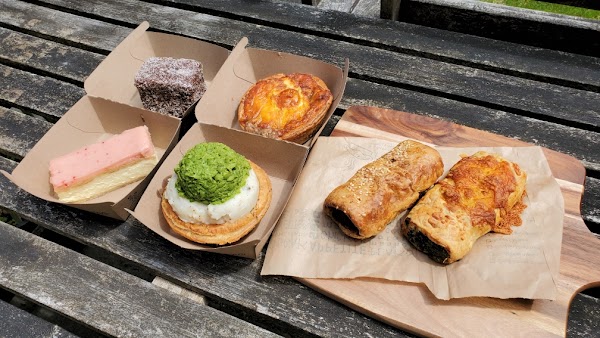 A lamington is an aussie-style cake square covered in a chocolate sauce and rolled in coconut (and I’ve been waiting to try this for years). The vanilla slice is a bit rich given all of the custard in the middle and I found it a bit difficult to eat. Personally, I found the sausage roll, although quite large, was a bit lacking in spices for the ground beef filling.

The thing that they really excel at is their aussie-style meat pies. The Ned Kelly is named after an Australian outlaw and is filled with juicy ground beef, ground bacon, egg, and cheese all encased in a flaky crust. I could eat this every day for breakfast (I’d probably keel over from a heart attack but what a way to go). 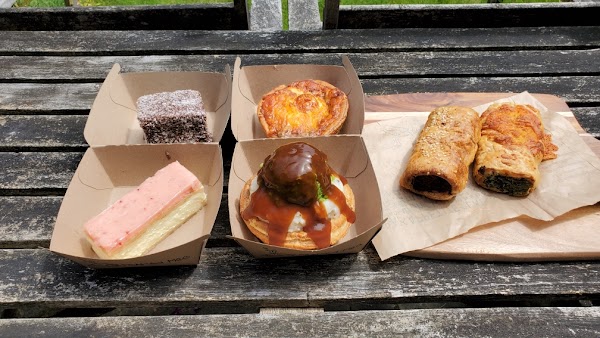 We got the Chicken, Mushroom, and Leek pie topped with mashed potato, mushy green peas, and gravy. By itself, the meat pie was really good with a creamy oregano sauce… but getting it peaked was even better. I know mushy peas doesn’t sound very appetizing but it really works.

A really good addition to the neighbourhood.