It’s been about 7 years since our first visit to Browns Socialhouse. Since that time, they’ve opened up a number of new locations and have taken a spot in the very popular “premium casual dining” market that’s been primarily occupied by the likes of Earls, and Cactus Club. Now, if these places all seem a bit “same”, it’s probably because there’s good reason… the person in charge of Browns used to work at Earls and then went on to open up Cactus Club.

On this particular day in mid-August, we found ourselves at the Browns at QE Theatre in downtown Vancouver. Due to Covid issues, many restaurants have been taking advantage of outdoor patio seating during the warm and sunny weather. To be honest, the view from this patio isn’t much to write home about but it was nice that they were even open as a couple of other restaurants that we tried to visit were closed.

I opted for the Florida Special ($19.75) which is described as a crispy chicken sandwich with avocado, bacon, Swiss cheese, tomato, and creamy coleslaw on a toasted baguette, served with fries. 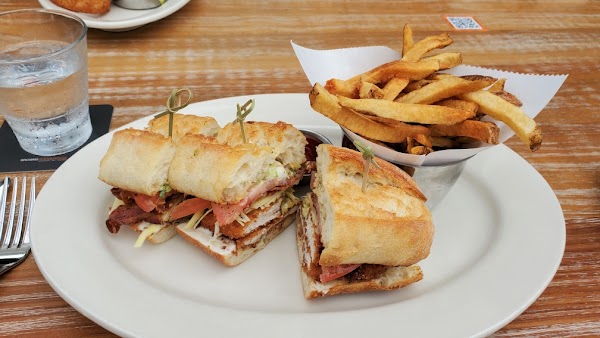 While I did enjoy the sandwich, I did notice a few things… the “toasted” baguette didn’t really seem toasted and was missing a bit of crispness which may have helped the sandwich hold up better. Part of the problem was that the sandwich was a bit too saucy which made the baguette fall apart (also not sure why they cut this up into 3 strange pieces). It also lacked a bit of crunch which I’d expect from coleslaw but, overall, not a bad sandwich and the fries were addictive.

If you like the things which make places like Cactus Club popular, you probably won’t be disappointed here.