Recently, I had noticed a new restaurant open up in the little mini mall on the corner of Canada Way and Edmonds. Located in a former unsuccessful Mexican/BBQ joint that I tried a year earlier, this new place was known simply as Rib & Chicken so I was expecting another BBQ place. However, it’s actually a Korean restaurant that specializes in Korean-style ribs and chicken.

It seems like KFC (Korean Fried Chicken) places are popping up everywhere these days. On my first visit, I decided to try their Half and Half ($20.99 original and sweet and spicy). When I arrived to pick up my order, I noticed that they renovated the interior and it looks much better compared to the former tenants.

The size of the chicken pieces are quite large but I found that the meat was a bit chewier in texture (compared with nearby Chicko Chicken). Still, the exterior was nice and crisp on the outside. 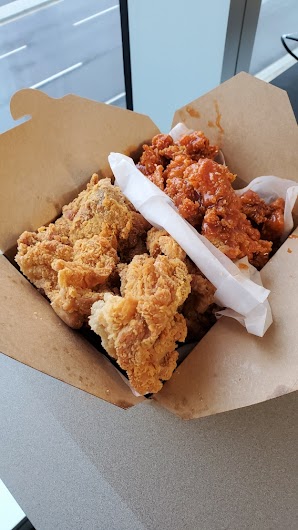 On my next visit, I decided to dine-in (they have a few tables available) and ordered the Grilled Pork Back Ribs ($18.99). The meal came with a bowl of pinkish rice, a simple green salad with a tart yet refreshing vinaigrette, pickled radish, kimchi, and sliced tofu. 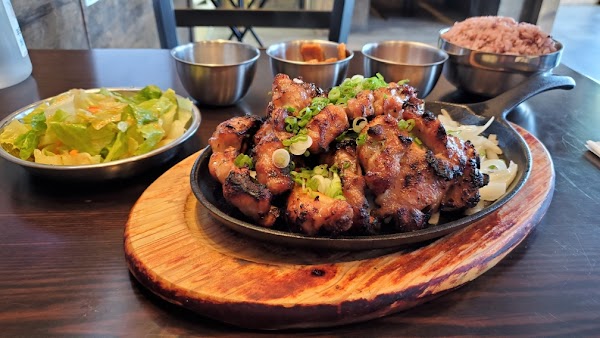 The pork back ribs aren’t fall-off-the-bone tender but they were very tasty and somewhat juicy. These are the kind of ribs that you have to really bite off the bone but that extra work is rewarded. I noticed that they put cut marks along the ribs which makes it somewhat easier to bite chunks of meat off the bone. I actually really enjoyed the ribs here (bonus points for the grilled onions) and they were quite plentiful (about 10 bones).