While stopping off for some bakery goodies from nearby Bao Bakery, I decided to pick up some lunch from Plato Filipino.

In reality, it was probably more like breakfast because I ordered their Tapsilog ($14). For those of you that don’t know, silog is a classic Filipino dish containing rice and a fried egg and they have a whole variety of silogs depending on the type of protein used. In this case, tapa, or marinated beef slices. Plato’s version came with shanghai rolls and steamed rice that was topped with garlic. 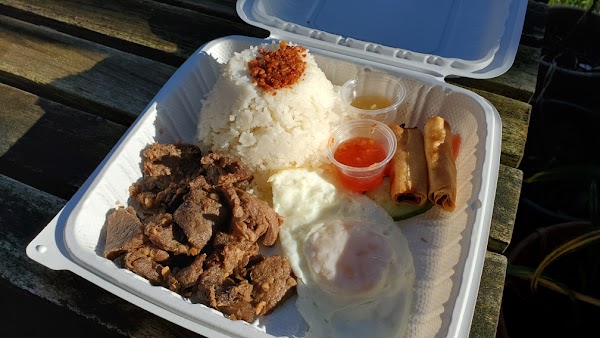 I found that the lumpia here were quite tiny and weren’t the least bit crispy (they wound up being kind of soft and limp). Meanwhile, the marinated beef slices were a bit tough and similar to jerky in texture (this didn’t come as unexpected to me as I’ve heard of tapsilog being referred to as marinated beef jerky before at another restaurant). On the bright side, the fried egg had a bit of runny yolk when I poked into it. However, I was kinda disappointed overall with the food here.