There’s an increasingly busy commercial park along Marine Way in Burnaby. Over the past year or so, they’ve been opening up a lot of fast food places here (which suits us since it’s relatively close and there tends to be a lack of food outlets in the area). We noticed a sign for “Bunnys” a couple of months ago but we really weren’t sure what it was all about… Was it a pet shop that sold bunnies? Was it a daycare business? Well, we finally found out that it’s food outlet specializing in Taiwanese fried foods – they have like half a dozen different fried items which they serve on either steamed buns, rice, or noodles.

I was a bit anxious to try this place out and, perhaps, that’s why my experiences didn’t live up to my expectations. On my first attempt here, I ordered using their online menu (because I’m trying to stay away from third-party ordering systems) and picked their Popcorn Chicken on Charcoal Bun ($8.65). Now, their picture online actually looked pretty yummy. For some reason, their online ordering system said that it would take 40 minutes! That time sounded really strange because it shouldn’t take them this long to make it (keeping in mind that I ordered around 11am). But I went ahead anyways and showed up at the specified time to pick up. Sure enough, the place was empty – there was only 1 other customer there so not sure why it took them 40 minutes. I took my order and went home only to discover that they only gave me popcorn chicken (no bun, no basil aioli, no toasted sesame seaweed, no crisp Boston bibb (I think that’s lettuce). What the heck? So I went back to their website and checked and confirmed that I ordered the right thing. It seems like when you order on their website, it only sent the order in as “popcorn chicken” even though you pick the “popcorn chicken on charcoal bun”. Now, as for the popcorn chicken itself, there really wasn’t much outstanding with it… it was typical Taiwanese popcorn chicken. 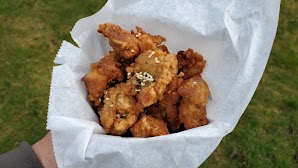 Now, I get that they’re relatively new so I wanted to give them another chance. The next time I wanted to place an order, I steered clear of their online ordering system and tried Skip the Dishes. But I was amazed again that it was saying that my order would take 40 minutes! So, I decided to skip the online ordering all together and just call in my order. Sure enough, when I called in and ordered the Prawn Tempura on Charcoal Bun ($10.35), they said it would only take 5 minutes! Glad that I decided to call my order in because it also ensured that I would finally get to try their charcoal bun. Unfortunately, the execution of their dish leaves lots of room for improvement. This was one ugly sandwich! Yes, it did come on a soft (somewhat spongey) charcoal bun but I found the bun was too soft and easy to tear so the filling didn’t really hold up well (especially given how much sauce they drenched it in). There were 4 prawn tempuras sandwiched inside the bun and the mayo left a slightly sour taste in my mouth afterwards. 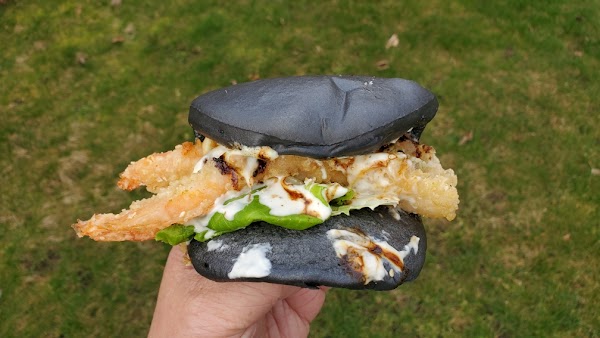 Overall thoughts… Don’t order online! Their ordering system is messed up (you’re likely to get the wrong item and the expected time is way off). If you want to try them out, call in your order. Also, don’t expect much here. The fried food is serviceable but nothing that would wow you. Plus they need to work on the execution of their food. I found the soft bun fell apart too easily when I was eating.