During a short road trip to Whistler in June, we decided that we’d finally try to head up to see Joffre Lakes. The lure of the countless pictures of serene turquoise lakes finally caught up to us and we figured we’d better do it before we got any older.

We heard that Joffre Lakes has gotten very popular over the last few years so we made sure to head out early since it’s about an hour drive north of Whistler (about 30 minutes past Pemberton). The drive up was relatively quiet with few other cars along the road. The winding switchbacks along Duffy Lake Road gave us our first indication that we were almost at our destination.

Upon arriving at the trailhead, we were rewarded by our early morning wake up with a somewhat empty parking lot. While there’s washrooms located further up near the middle and upper lakes, I’d recommend making a pit stop at the washrooms located at the parking lot because they’re kept up better than the ones further up. 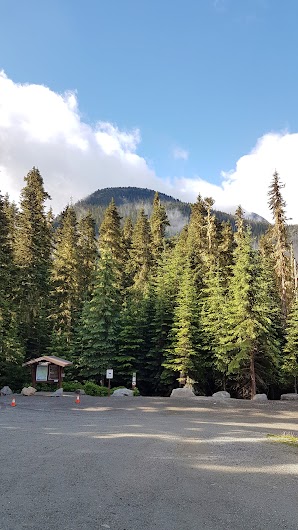 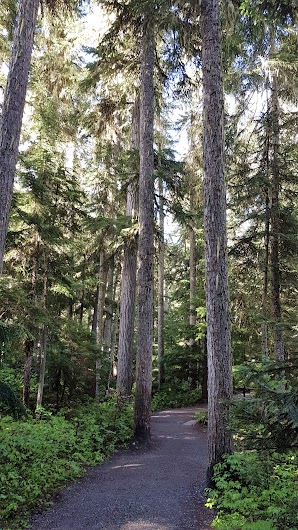 There are 3 glacier-fed lakes here and the first lake is just a 5 minute walk from the parking lot. The trail is clearly marked – stay to the left at the fork in the trail to head down to the Lower Lake. Personally, I didn’t find the Lower Lake very impressive and it doesn’t have the same colour that you see in the Middle and Upper Lakes. 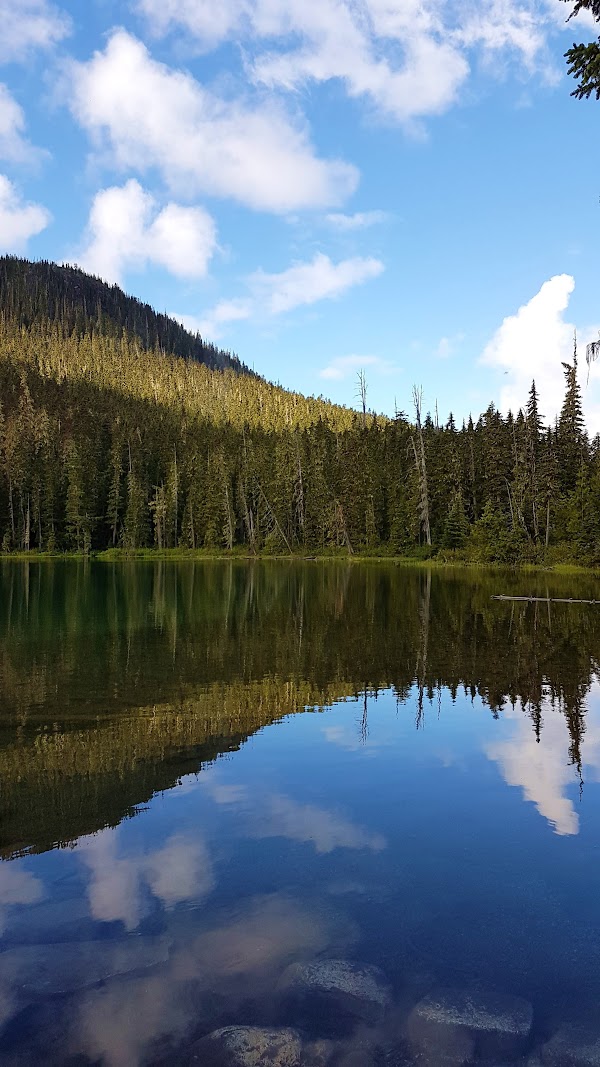 Heading back up to the marked trail, you’ll quickly come across a wooden bridge that spans the creek and takes you around the Lower Lake. 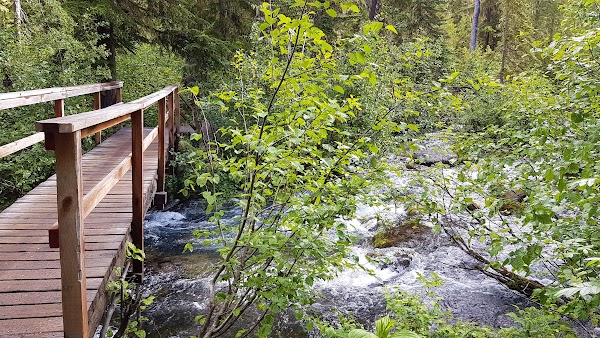 As the trail begins to climb, you’ll notice that the view of the Lower Lakes starts to show some of that turquoise colour that drew you here as the reflection of the sunlight increases. 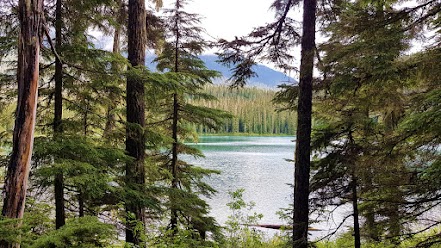 After about 1/2 an hour, we started to come to a clearing. Behind us were the many hemlock and spruce trees. 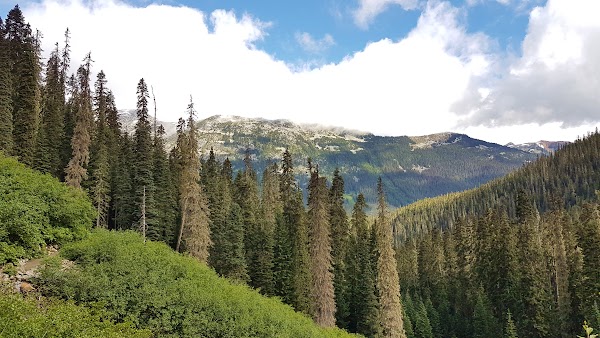 In front of was the moraine field (boulder debris that has accumulated by the retreating glacier) which was well maintained and no longer requires hikers to clamour over precarious rocks. The view from here was breathtaking… no seriously… I was out of breath. 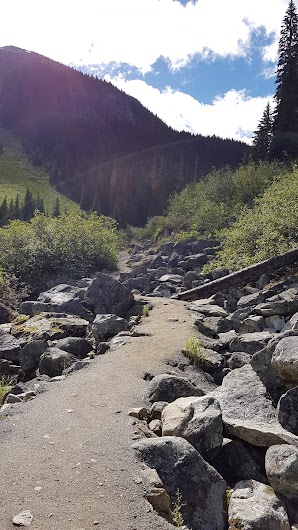 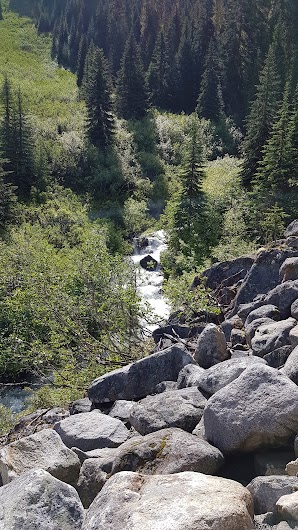 At this point, you’ll notice that you’ve climbed in elevation enough to notice the long drop below. This is just the beginning though and the trail will get narrower and steeper as you proceed. 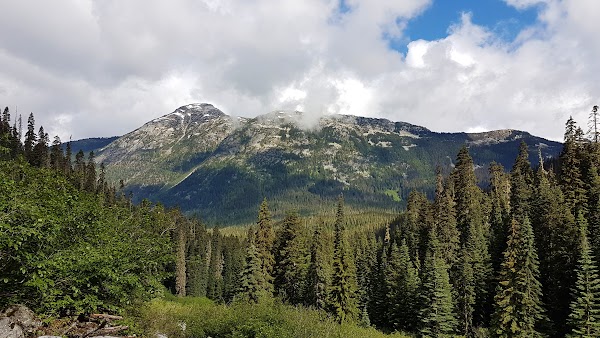 As if to announce that the trail was about to get tougher, you’ll start to notice some wooden steps that have been added to aid your ascent. 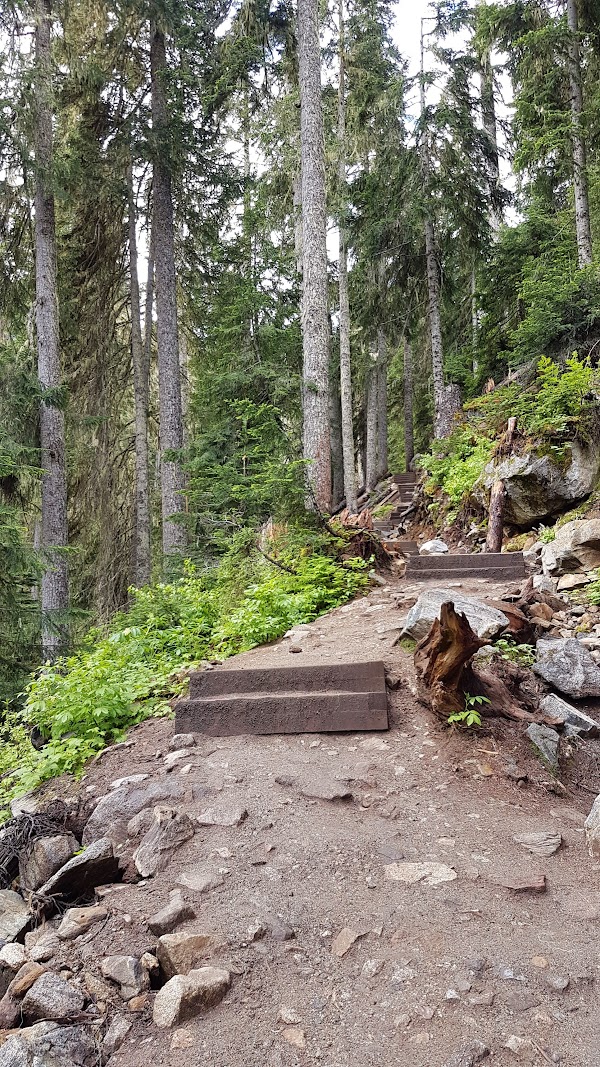 After about 20 minutes, we came to a small waterfall in the cliff. Just to the side, there’s a neat hollowed log which acts as a spout for some of the cascading water. 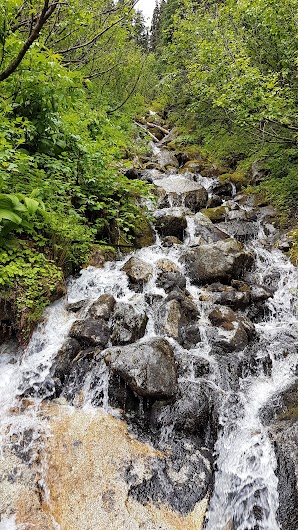 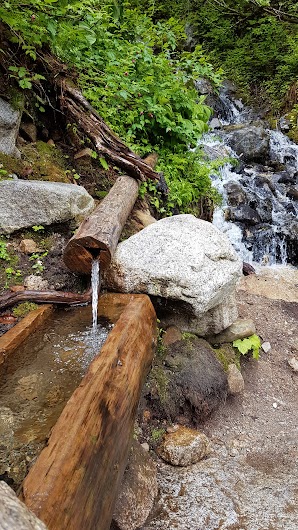 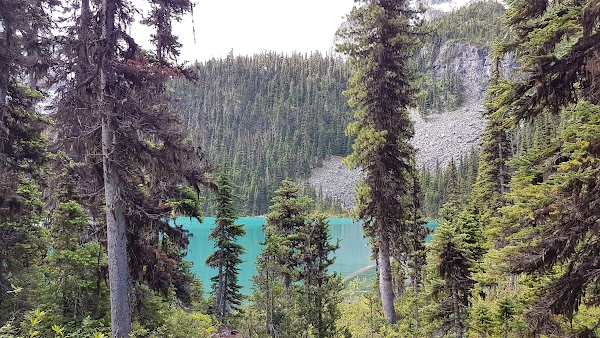 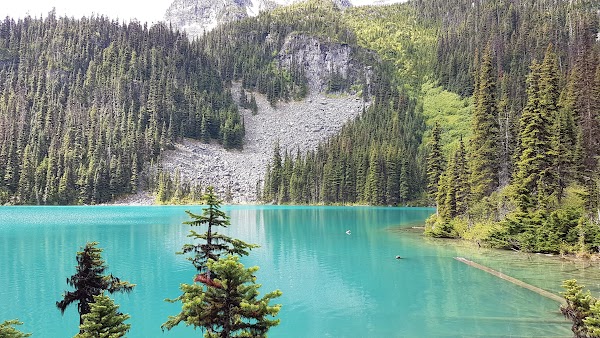 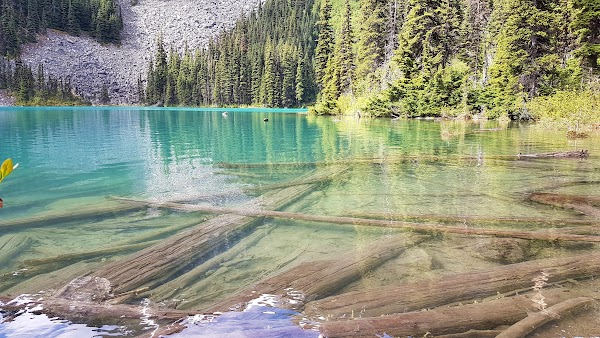 We stopped here for a bit and took a ton of pictures. The Middle Lake was definitely our favourite as the picturesque colours was everything that we hoped for. The pictures that we took just didn’t seem to do justice for what we saw with our own eyes. There is a spot here where you can rest and enjoy a snack. The birds here seem to be used to hikers and were always hovering about looking for scraps. We were fortunate that we got here early as there were only a few other hikers here. When we came back down, there were dozens of people here and it was much less serene.

Continuing our walk around the Middle Lake, we came across the famous fallen tree that spans into the Middle Lake. Given our clumsy nature on flat ground, we didn’t climb out on the log but we saw a few people try it. If it’s on your bucket list, go for it… just remember that the water is glacier-fed so it’s sure to be cold. Speaking of cold, we noticed that the temperature had dropped a bit as we gained elevation – it’s a good idea to have layers so you can properly regulate your temperature. 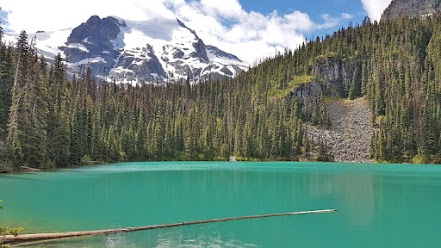 Continuing past the Middle Lake for about 20 minutes, we reached another waterfall that rushes down from the Upper Lake down to the Middle Lake. From here, although the hike up to the Upper Lake isn’t very far, it becomes steep in some spots and the trail quickly turns to mud and you have to watch your step over tree roots (I’ve still got a bruise on my leg from taking a bad step and running into a log. If you take the time to look, you’ll also notice various wood carvings that someone has made along the trail. 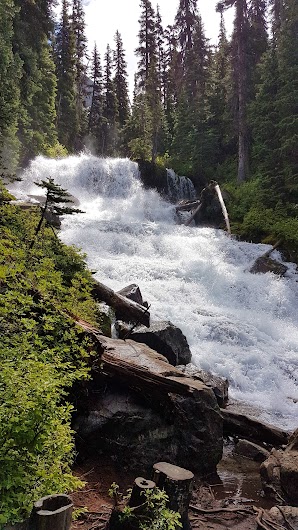 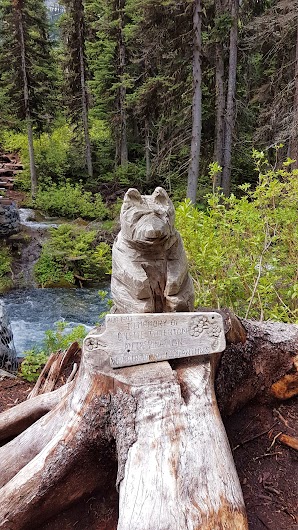 After what seemed like an eternity (about 5 km and an elevation gain of 400 metres), we finally arrived at the Upper Lake. It took us about 2 to 2 1/2 hours including stops along the way. 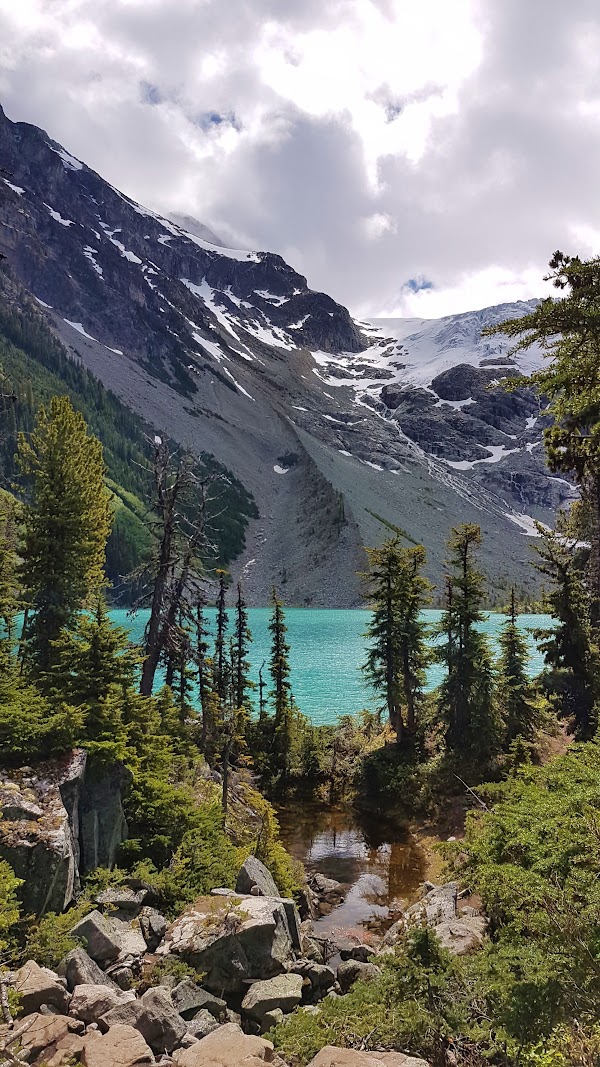 From here, there’s a good close up view of the Matier Glacier. As this is the end point for most hikers, it’s a good spot to sit, rest, and get some nourishment before the trek back down the mountain. There’s no garbage cans here so remember to pack up whatever you bring up. 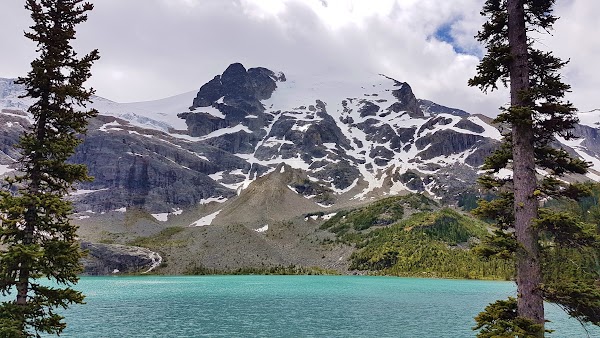 Also to note is that the view of the Upper Lake requires some climbing over various large rocks to get close to the lake. Some of the rocks are loose so it’s easy to lose your footing. 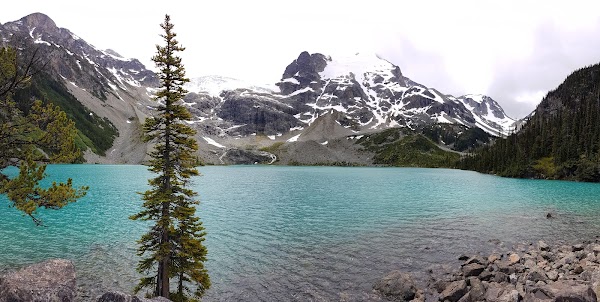 If anything, I think I noticed my knees hurting more on the hike down. Glad we went… probably wouldn’t do it again. If you plan to go, make sure to check the weather first and head up early to avoid the crowds.