I was looking for a new place to try out for lunch in New West and found a bright looking restaurant on 12th Street called D Roti Shak.  By “bright”, you only have to look at the picture below to see what I mean… each wall was painted in a different bright colour.

When I walked inside, I was a bit concerned because it was noon and the place was empty… not usually a good sign.  However, other patrons did start to come in a bit later including a rather large party of elderly gentlemen.  As it turns out, some (if not all of them) were Trinidadian which alleviated some of my concerns… they should know what good Trinidadian food tastes like. 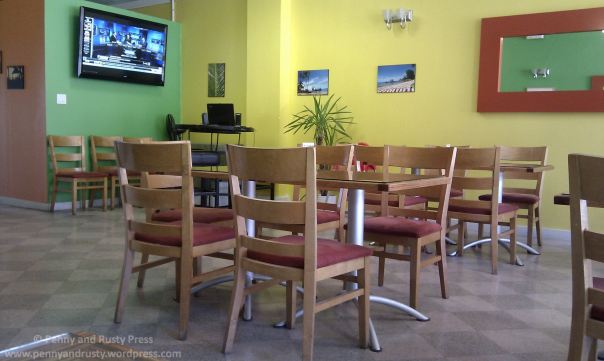 I started out with an order of Aloo Pie ($3.25) – the proprietor told me it was deep-fried and like a samosa.  While it was served hot, I’m thinking it must have been pre-made and reheated in a microwave because it came out really quick and the dough felt soft instead of crispy.  If it was freshly deep-fried, I think it would have been better because the filling was decent and had a nice spicy flavour to it. 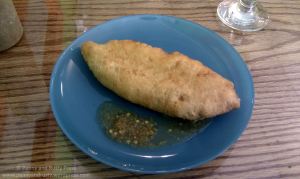 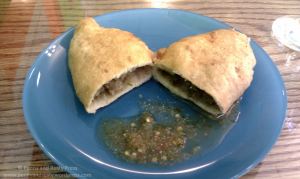 I asked the owner about the roti and he said that it was a big meal… he wasn’t kidding.  The Beef Roti or Dhalpuri ($9.25) is kind of like murtabak and looked like it was a puffy pillow.  Like the aloo pie, this is like hawker-style food (and a bit westernized).  The thin and soft roti was folded around an ample amount of beef, potatoes, ground peas, and cumin and had a good amount of heat (I asked for it spicy).  I do wish that the beef was a bit more tender because it was on the dry side. 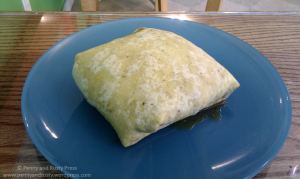 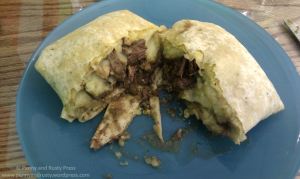 They only accept Visa, debit, and cash and while they have dine-in service, you have to order at the counter.