If you’ve ever found yourself in the dairy aisle of your local grocery store, you’ve probably heard of Avalon Dairy. This local dairy producer has been around the Vancouver area for a very, very long time. A number of years ago, they moved their location over to North Fraser Way in Burnaby and have a small eatery at this location called Old Farmhouse Kitchen.

Nestled in an industrial complex, it’s easy to bypass this place if you didn’t know it was here. I wound up ordering the Loaded Beef Dip ($8.99) and paired it with a Strawberry Milkshake ($5.99) – because why wouldn’t you order a milkshake from a place known for their milk?!?

The first issue that I had on this visit was that my strawberry milkshake wasn’t a strawberry milkshake… it appeared to be a plain milkshake. I didn’t say anything because I thought perhaps they didn’t hear me right. In any case, I found the milkshake to be a bit meh since it wasn’t very thick. Perhaps the strawberry flavoured one would have been better. 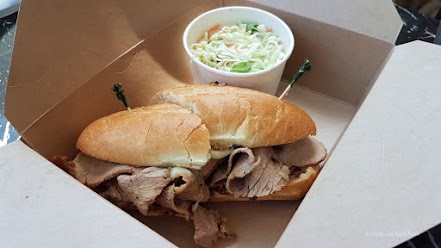 They have some seating inside this store/restaurant so I ordered my meal for dine-in (as opposed to take-out). When they called my name, I was a bit surprised that they put my beef dip in a take-out container. Again, I didn’t say anything because I figured it was probably an honest mistake as they looked like they did a lot of take-out orders. The thing that was inexcusable, however, was when I opened the take-out box and discovered that they didn’t give me the au jus for the beef dip! Seriously? That’s the thing that makes a “beef dip” a “beef dip”… the “dip”! This was something that I couldn’t leave as-is so I went back to the counter and asked whether or not my beef dip was supposed to come with any “dip”. They looked a bit confused at first but then realized they didn’t give me the au jus so they went and ladled out some au jus for me.

As for the beef dip itself, it was okay… the bun was crusty and it had caramelized onions and melted cheese and was accompanied with a side of coleslaw. I wasn’t overly thrilled with either the food or service on my first visit but I’ll probably try for a revisit to see if this was just a one-off.

As it turned out, I came back for a revisit in the following month and ordered the Tuna Melt ($6.99) and Hot Chocolate ($2.79). The sandwich comes with your choice of a side and I picked the coleslaw again as it has right amount of crunchiness and creaminess. They actually make the hot chocolate with Avalon chocolate milk, which is a nice touch. 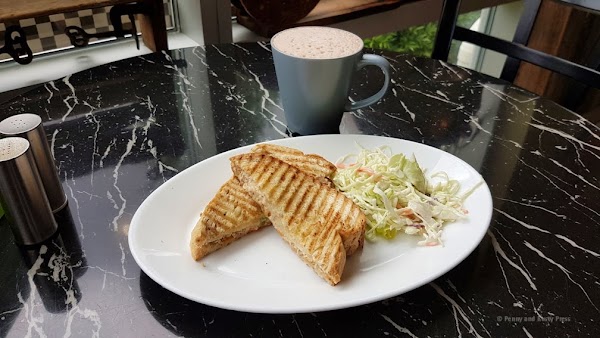 The tuna melt is a bit basic but does include some diced up celery (?) in the tuna mix. They use a press on the tuna melt so the grill impressions are noticeable on the bread but it could use more of a crispness to the exterior IMHO. Overall, a much better experience than my first visit.