One of the things that we seem to be seeing a lot more of (perhaps due to Covid) is many restaurants and food shops pivoting to take-out only. Sashimiya is one of the places that doesn’t offer dine-in seating. Instead, they act as a combination of Japanese grocery store and take-out shop where you can get freshly made sushi and sashimi that rivals any high-end Japanese restaurant.

In early December, we dropped by to pick up their Chirashi Premium (XI) ($29.25) as well as a Nigiri Plate ($29.25) – ordered via Uber Eats. First off, the sashimi here is quite fresh and the uni in the chirashi was sublime. The nigiri platter came with a maki roll as well as an assorted selection of sashimi which included tuna, hamachi, salmon, squid, shrimp, and some type of white fish. 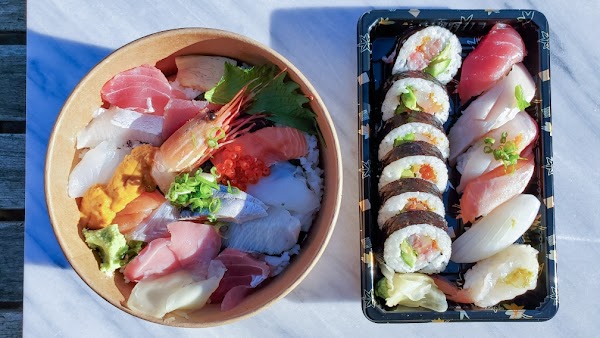 Pricewise, it’s not cheap… but quality sashimi rarely is. Unlike Takenaka (which also offers high-quality Japanese take-out), Sashimiya sticks to sushi and sashimi. It would be nice if they offered some other types of Japanese food (but it’s understandable as they are more geared towards quick take-out).