We stopped by in mid-June to a small little shop called Kilimanjaro Snack House. Here, they serve an assortment of east-African goodies to tempt your tastebuds. Our original reason for stopping by was to try their samosas but we wound up ordering a bunch of items (some of which, aren’t on their regular menu).

We started out with their Mix Platter which came with Nylon Bhajias (basically a sliced potato pakora battered in chickpea flour and spices), 2 samosas, and 3 kebab balls and added an additional side order of samosas. Note that they actually got our samosa order wrong and they seemed a bit disorganized. With that being said, the samosas were quite good (they remind me of the ones from Safari Snack House in Burnaby). I actually prefer these smaller and crisper samosas that you find here compared with the large, chunky ones you usually find at east Indian places. The kebab balls have a nice crisp outer shell and goes well with chutney. 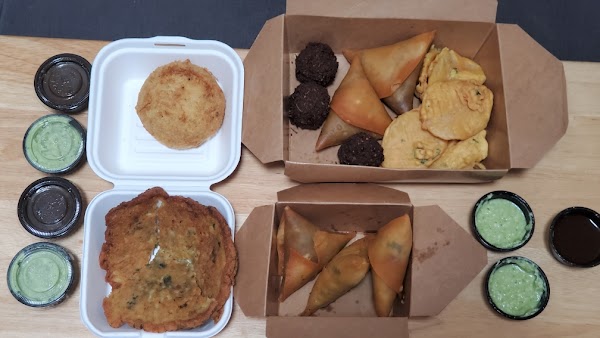 We also ordered a round-shaped shepherd’s pie item (can’t remember the name of it) that’s encased in a fluffy mashed potato mixture. This is actually really good as it has a bit of crisp outer shell while being tender and savory on the inside. Another item that we ordered that wasn’t on the menu was a roundish pancake-like item made with chickpea flour and onions and then crisped up.

If you like fried snack foods (and who doesn’t?), you can find some tasty tidbits here.