It’s been a while since our first visit to Rogue Kitchen & Wetbar.  We honestly had trouble deciding what to have on the menu so we just opted for a whole bunch of dishes to share.

First up was the drinks… Satan’s Angel (with smirnoff vanilla vodka, peach schnapps, and pear juice) and a Virgin Mojito.

The Chicken Cobb Salad ($15.99) was actually a decent sized salad.  I’ve heard that cobb salads tend to be one of the unhealthest salads you could possibly eat but that’s probably just because the toppings are just so tasty.

The special pizza of the day was the Californian Chicken with Pesto served on a really thin crust.

Next was the Sushi Bombs 2.0 ($9.99).  We really had no idea what to do with these so we had to ask the server about it.  The sushi itself was fairly tasty but it was a bit messy and the sushi fell apart at times.  Those little “bombs” are filled with wasabi soy and you can either drip some sushi on top or squeeze it in your mouth as you chomp down on the roll.  I really didn’t find that the soy chaser added much to the sushi other than the novelty and the roll was fine on it’s own.  Perhaps if the chaser had a bit more kick to it, I would have liked it more. 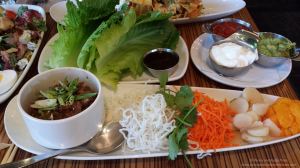 I think that summarizes the food here… it wasn’t that bad.  Nothing overly wrong (and some interesting dishes) but nothing that really stood out.