Ok, so I’ll be very blunt… many years ago, I tried Re-Up BBQ and wasn’t very impressed so I’ve kind of steered clear of them for a long time. Recently, I heard of a new place that they opened up in New Westminster called Highlight by Re-Up BBQ, which takes aim at the breakfast-obsessed people with offerings of biscuits, pancakes, and sandwiches all enhanced with their usual BBQ offerings.

Colour me intrigued because it was enough to encourage me to visit and see for myself. This location is near the heart of the 6th and 6th area of New West and they just opened up earlier in the year. I ordered the Chicken and Biscuits with Country Style Gravy ($12.95). Despite it not being overly busy, I found that it took a while for the food to come out. When it did finally arrive to my table, I was quite pleased. 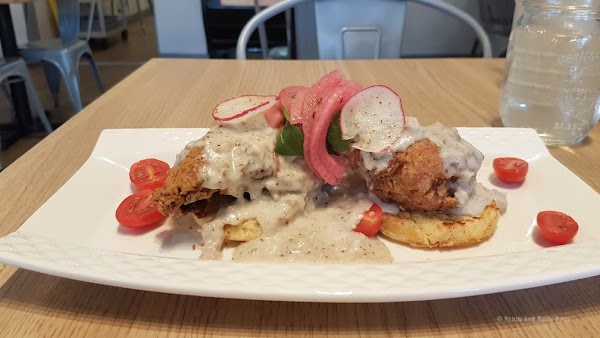 The fried chicken comes with 2 pieces of bone-in leg and thigh perched on top of soft buttermilk biscuits. The freshly fried chicken had a nice, crispy skin and, overall, I thought this was a good dish with the slight tartness of the pickled radish and the savory gravy… can’t go wrong with gravy. 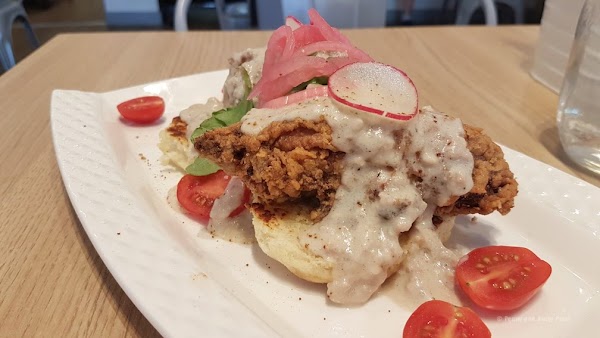 I was impressed enough by my first visit that I decided to return a couple of weeks later to try their Fried Chicken Benny ($14.95) which is a similar dish (ie. fried chicken served on buttermilk biscuits) but with the addition of poached eggs and a side of hash browns. This time, I had to go to the front counter to order and it took about 14 minutes for my food to come out. On first appearances, things looked good. 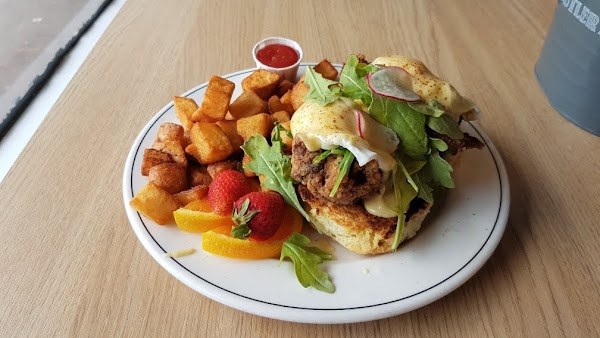 However, when I went to cut into the poached eggs, I was disappointed that they were over-cooked. I know that this is a “first world problem” but this dish really needed the runny yolk because the chicken was a bit over-cooked as well and the combination of the dry chicken meat and buttermilk biscuit makes this difficult to eat. Definitely not as good as the chicken and biscuits that I had on my first visit. To be fair, the biscuits themselves were still pretty good… nice and fluffy. But the chicken meat was dry and chewy on the inside (they used boneless chicken in this dish). If the yolk was runny or if there was some gravy that went along with this dish, it probably could have been saved. There were a plentiful amount of hash browns but, unlike the chicken and eggs, could have used a bit more crisping up on the outside. 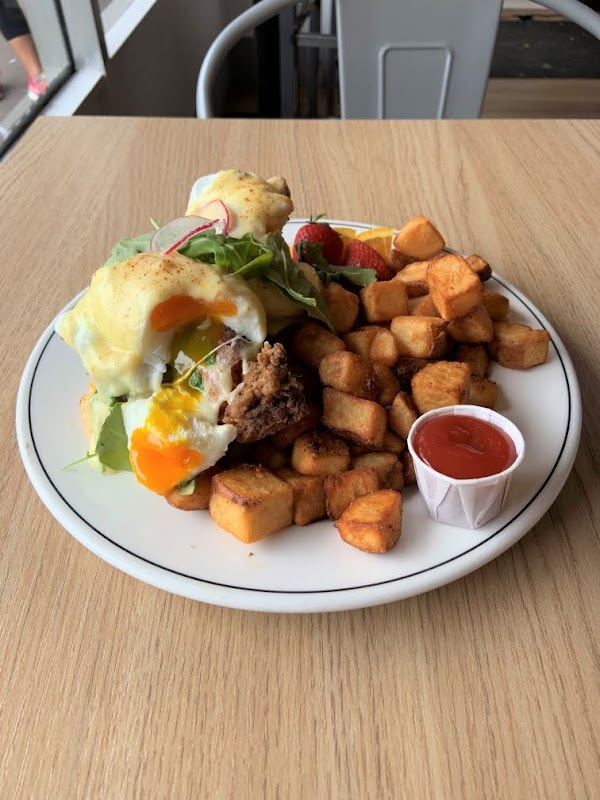 I figured I should come back and give them another try to see if the issue with the over-cooked poached eggs was just a one-off so the next time I visited, I tried their Beef Brisket Hash ($14.95). Served on a skillet with potato nuggets, onions, green pepper, corn, roasted cherry tomatoes and topped with two poached eggs… I was pleasantly surprised by the yellow runny yolk that oozed from the egg once I popped it. The beef brisket was cubed up and deliciously tender. Overall, a pretty good hash dish. The online menu said that it’s served with a traditional gravy but I didn’t notice a gravy (that would have really kicked this dish up a notch). 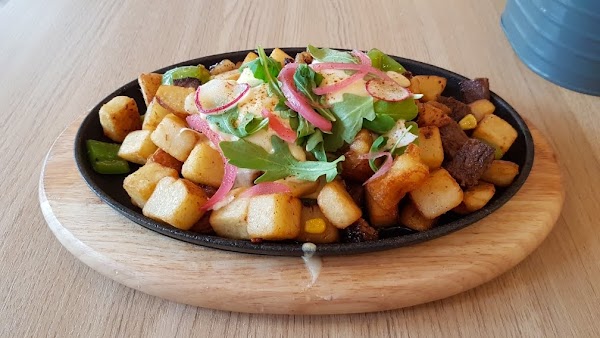 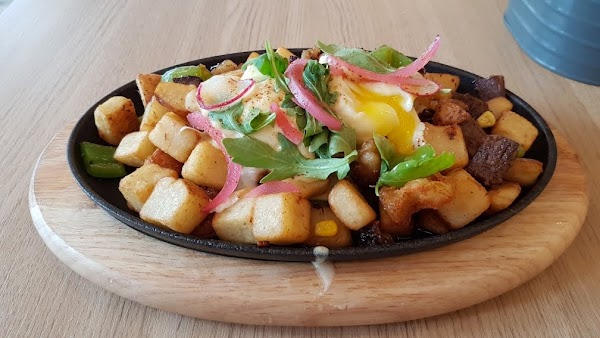 I came back for a revisit in late August to try their Spicy Fried Chicken Sandwich with Fries ($9.95 + $2.50). They claim that this is the sandwich that made Re-Up BBQ famous and I can see why. It’s a really good fried chicken sandwich with the right amount of spiciness that you can feel the heat in your mouth but not overpowering (you can probably thank the spicy coleslaw and jalepeño for that). They layer the crispy fried-chicken with bacon (thank you) and cheddar and slather on some guacamole, chipotle mayo, and bbq sauce onto the kaiser bun. The fries need work tho. I also feel like they need to work on their service as it’s often disjointed, especially when it’s busy (I saw one party that left after they had been sitting and waiting for service). 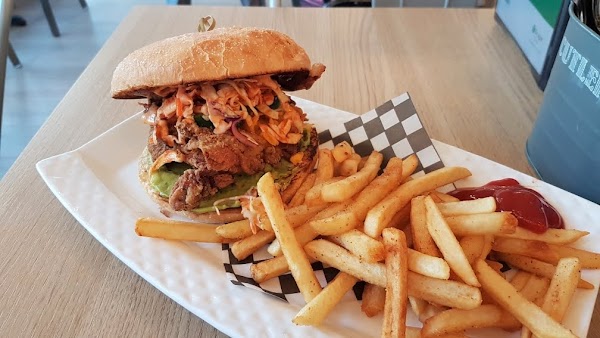 On my next revisit in October, I tried their Re-up Smoked Bacon Basic Breakfast ($14.95 + $2.50 for a side of fruit salad). As I’ve probably mentioned previously, I’ve had slow/sketchy service here in the past and, unfortunately, today was not going to be any different. It took 15 minutes just to take my order – but this was because she kept taking the orders for people who came in after me. Seriously… someone came in after me, had their order taken, and their food delivered to their table before she came back to take my order. And it’s not that I didn’t try to flag her down either. Okay, enough of this ranting.

Take my advice, skip the fruit salad as it was very basic with just a mix of chunks of apple, strawberry, and orange slices. To be fair, the breakfast was actually quite good. You get pimento cheese buttermilk biscuits topped with eggs along with hash browns, pit beans, and bacon. It would have been nice if they asked how I wanted my eggs prepared but the over-easy eggs turned out nicely with a runny yolk on the inside. The pit beans were really good and had a bold and smokey flavour.

As for service, I was never checked-in on, no water refill, or even just a stop by to see if everything was okay (which I heard her do for the other diners). 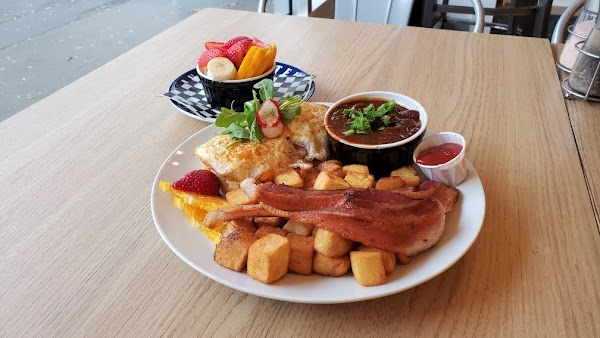 Overall, I have really mixed feelings about this place. Generally speaking, most of the food items I’ve tried here have been pretty good. However, their service (or lack thereof) leaves a lot to be desired. I’m not sure if it’s just a matter of not enough people working or if they just don’t have the proper customer service training. In either case, I’m a little over the drinking water served in a mason jar… so passé.