Pho Japolo is located on the Burnaby side of North Road, just off of Cameron Street. While I’ve had this place on my list for quite some time, I really didn’t plan on visiting the day that I did… it just turned out that my first choice was too busy so I wound up turning into this parking lot and saw the sign for Pho Japolo.

This restaurant is a bit unique in that they offer both Japanese and Vietnamese dishes. Normally, in this area, you see a lot of Korean fusion restaurants (especially Korean-Japanese) but this is the first time I’ve been to a restaurant where I could order both pho and sushi. 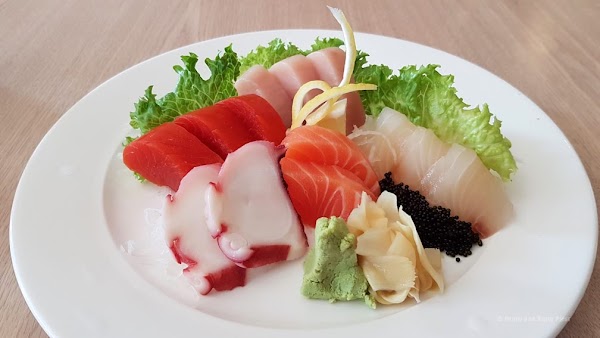 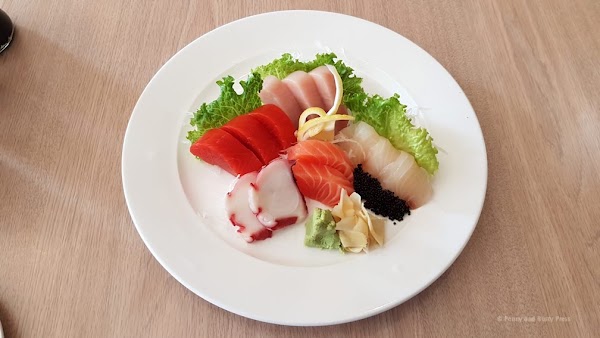 On my second visit, I figured it would be a good idea to try something from their Vietnamese menu and ordered the Pho Tai, Gau, Gan, and Sach ($9.95 for small) which is a rice noodle soup dish served in a light broth with rare eye-of-round steak, thinly cut fatty brisket, tendon, and tripe. I loved how pink and rare the thin beef steak was and the soup was adequately hot to cook it to my liking. As with most places, I thought the dish could use more tripe and tendon but that didn’t distract me too much. 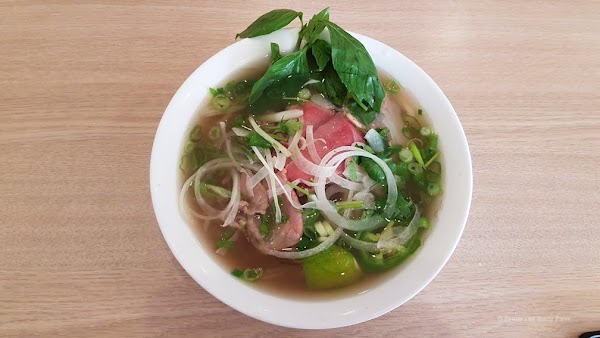 On my next meal I decided to try their Ebi Sunomono ($5.95) which is a chilled bowl of vermicelli noodles with thinly sliced cucumbers, two pieces of ebi, seaweed, and a bit of lemon to cut the rice wine vinegar. 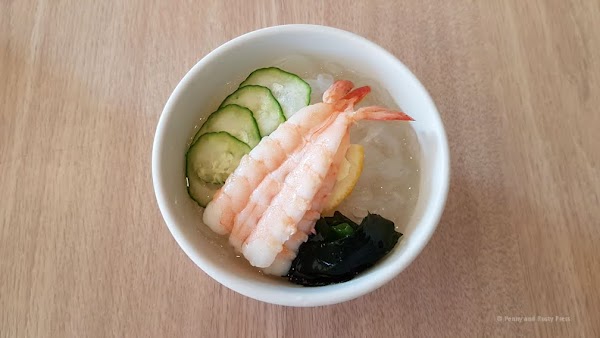 Since my first visit here, I’ve had my eye on the Tai Usuzukuri dish ($12.95). Usuzukuri derives from the Japanese word (usui) for “thin” so this dish is all about extremely thinly sliced sashimi pieces. Tai, which goes by a number of different names depending on who you ask (red snapper, sea bream, etc…) is a good choice for this dish as the thinly sliced pieces accentuates the translucent quality of the fish. 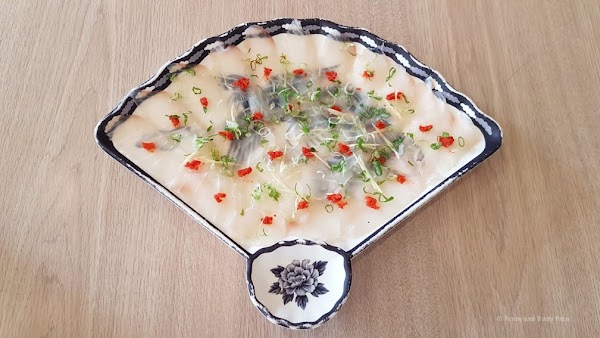 It’s really a beautiful dish and the presentation was on point as you could see the design on the plate through the thinly sliced tai. Instead of soy sauce, I dipped the pieces in the ponzu sauce that accompanies the dish. 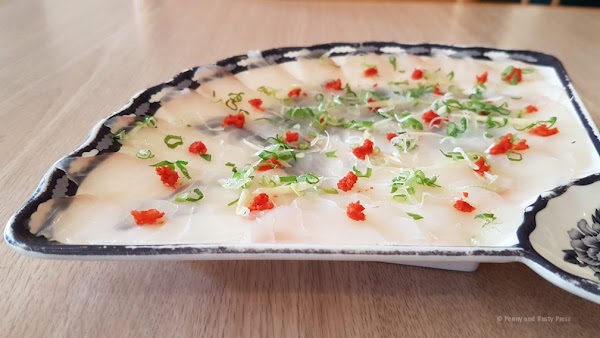 I finally got to try mixing up Japanese and Vietnamese cuisine on a visit in January when I ordered their Box C Lunch Special ($12.95). First of all, it’s a great value for the amount of food you get… 3 pc salmon sashimi, 2 pieces tuna sashimi, 2 pieces red snapper sashimi, salmon maki sushi, 1 each of salmon, tuna, and ebi nigiri, prawn and veggie tempura and, for the Vietnamese portion, grilled lemongrass chicken on rice. Their sashimi quality here is really good and the tempura was perfectly fried up with a light and crisp batter. Oh, and did I mention that I also got complimentary miso soup and ebi sunomono? 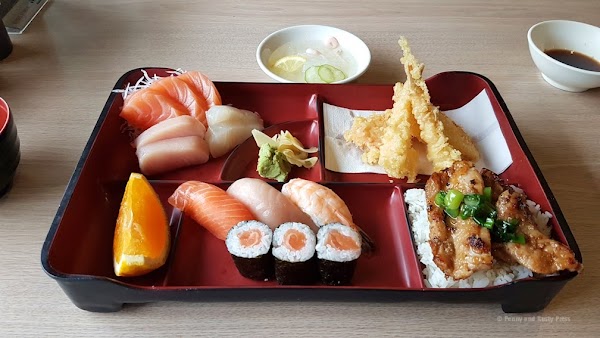 On a visit in March, I decided to kick things up a notch and order a bunch of items. First off was the Tuna and Salmon Sashimi ($11.95) and Chicken Karaage ($10.95). As I’ve mentioned numerous times before… the sashimi was on point. The fried chicken karaage had a nice light crispness to the exterior which revealed tender nuggets of chicken meat on the inside. 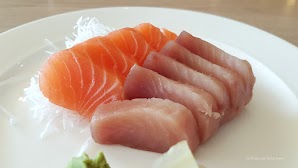 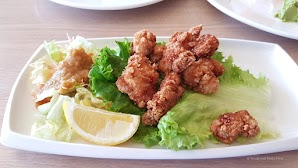 Next was probably the best Rainbow Roll ($15.95) that I’ve ever had! The inside of this roll is essentially a creamy California roll with imitation crab meat and avocado. However, what makes it unique is the care and attention given to the topping… alternating bands of tuna, salmon, spinach, and snapper are diagonally stretched along the roll ensuring that you get a bit of each topping with every bite. Seriously… order this dish if you come here! 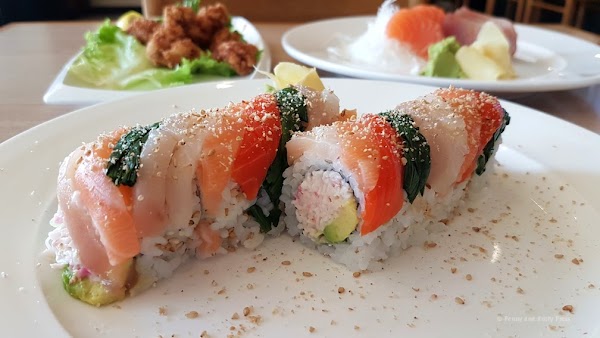 For the last item, I ordered the Sockeye Salmon Sushi Pizza ($17.95) made with sushi rice pressed into the shape of a mini pizza, breaded and deep-fried. Afterwards, they drizzle over mayonnaise and unagi sauce and sprinkle on chopped onions, red peppers, and green peppers before they complete the pizza with the sockeye salmon sashimi, masago, and green onions. 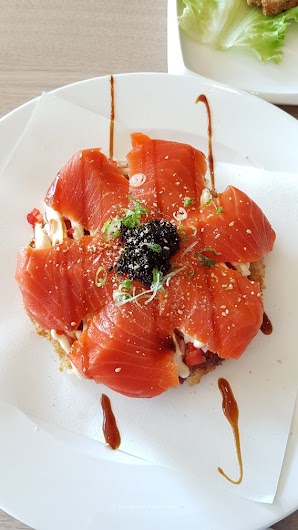 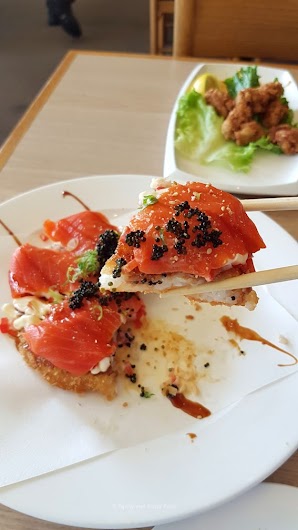 This is a very impressive, savory dish with the perfect crispness to the rice. 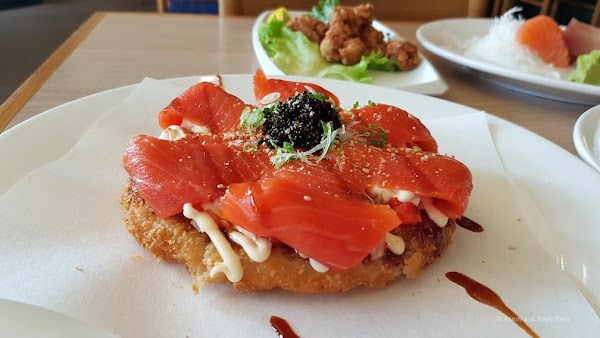 Overall thoughts about Pho Japolo… friendly service, thoughtful execution of sashimi dishes, and love that they have both Vietnamese and Japanese dishes here.