I rarely tread out to the suburbs but I’ve been having difficulty finding new (to me) restaurants around my usual haunts. That’s how I wound up at Hanamori Sushi in Coquitlam. This small sushi restaurant is located in the same mini mall as the Executive Plaza on the north-east corner of North Road and Lougheed Hwy.

For those of you that are familiar with the area, there is an abundance of Korean shops and restaurants in the area. I suppose I shouldn’t have been surprised that they use metal chopsticks here (something which is common in Korean restaurants). 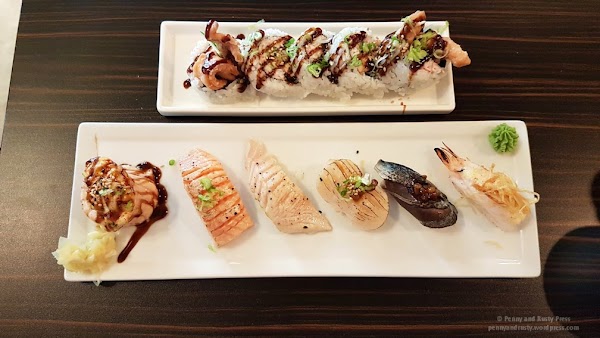 The first thing that I noticed when I picked up my first piece of aburi sushi is that they didn’t do a very good job with the rice as the ebi separated completely from the rice below with barely a touch… this also happened with the saba as well. The ebi itself was a bit sweet but the mackerel was a bit meh. The rest of the aburi, however, was pretty spot on. 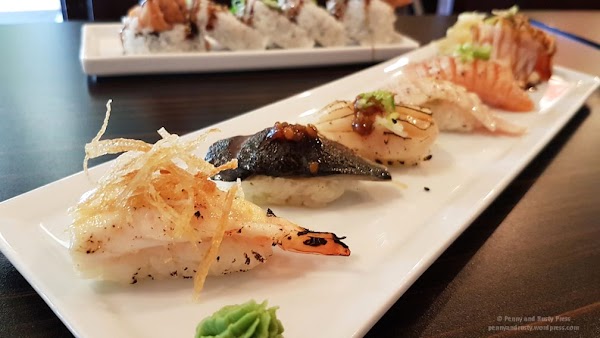 I liked that the scallop had a fresh and plump bite and that the toro was nice and buttery. The aburi salmon belly was another strong item with a nice portion size of fatty salmon belly that melts in your mouth. According to their menu behind the sushi bar, the aburi wild salmon is “a must try” and I’d have to agree. In many respects, it reminds me of the sushi bomb at Hyack Sushi and the off-menu “spoon” at Victoria Sushi… buttery, creamy, tender, melt-in-your-mouth goodness. 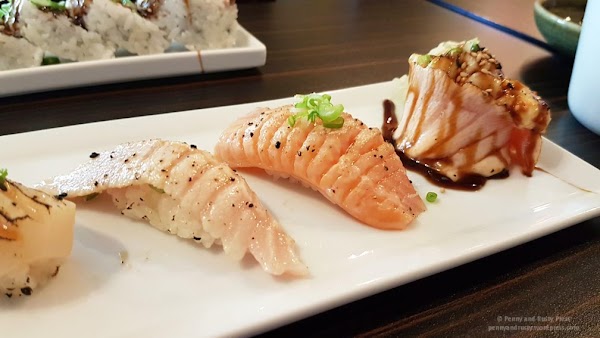 The BC Roll was a bit meh for me but that’s probably because I prefer my BC Roll to be cut thin with mainly crispy salmon skin. Instead, the BC Roll at Hanamori has thick slices with large pieces of battered salmon (almost like tempura) in the middle along with imitation crab.

I decided to come back for a revisit the following week and try some of the items that were listed on their blackboard. In addition to ordering their Torch Salmon ($4) and Torch Salmon Belly ($3), I picked up a Torch Beef ($3.50), Torch Hamachi ($3.50), Torch Scallop ($3.50), and Torch Tuna ($3). I originally wanted their torch toro but they were out so I settled for the torch tuna instead. 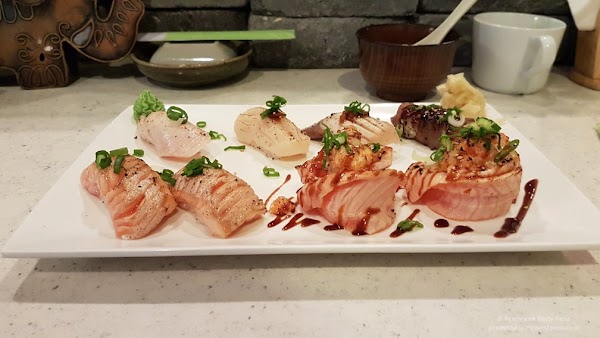 Both the torch salmon and torch salmon belly were just as good as I previously remembered… that’s why I ordered two of each. Superbly tender and buttery! Meanwhile, the thinly sliced beef had a nice texture from the torching process and I found that the hamachi (yellowtail) was pleasantly tender without being fishy. The scallop was deliciously plump but I did notice the smallest amount of grit when I bite into it. While the tuna wasn’t bad, I’m sure the toro would have been better. I even got a complimentary miso soup this time around. 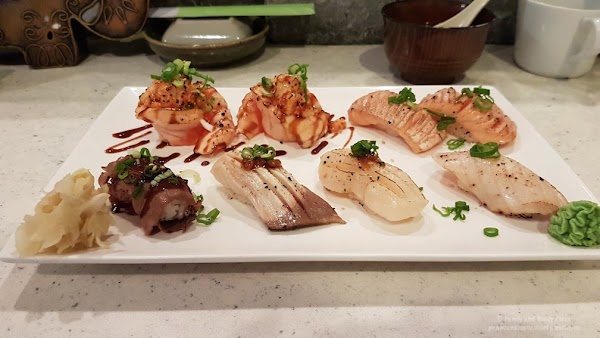 On my third visit here, I decided that I wanted to try some of their cooked food so I ordered the Chicken Karaage ($7). The small pieces of boneless chicken weren’t like regular Japanese chicken karaage as they seemed to have a panko-like crust resulting in something similar to popcorn chicken. Served with a sweet chili sauce, this was probably closer to a Korean version – not necessarily a bad thing. 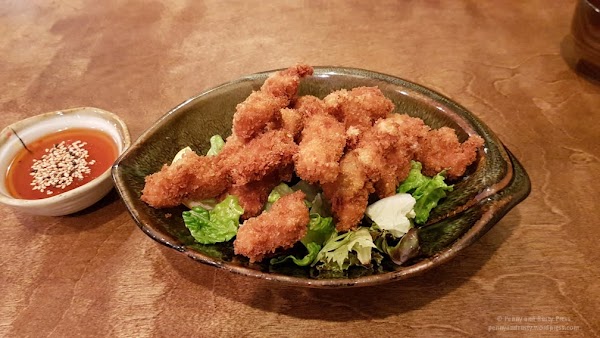 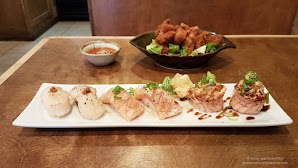 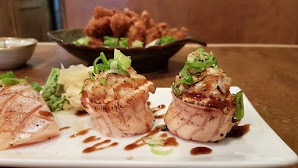 The wild salmon flower and the salmon belly didn’t disappoint… these are definitely my go-to orders here. The lightly torched scallop was good too with a delicious plump bite. 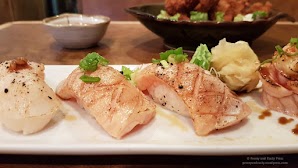 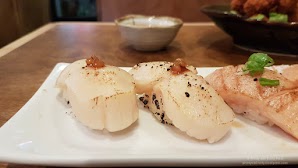 Okay, I know this is beginning to sound like a broken record, but on my fourth visit here, I again ordered two Torch Salmon Belly ($3) and two Torch Wild Salmon ($4). I simply love how tender and buttery their aburi salmon is here and the salmon belly is such a generous portion size that melts in your mouth. 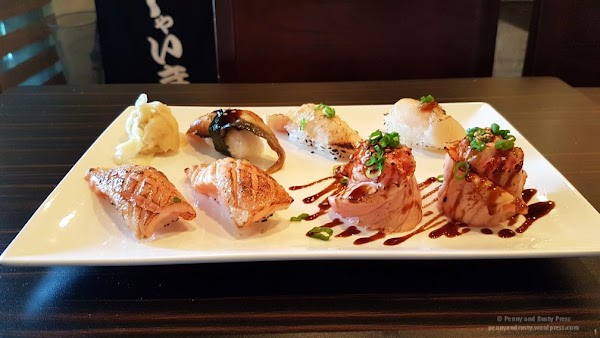 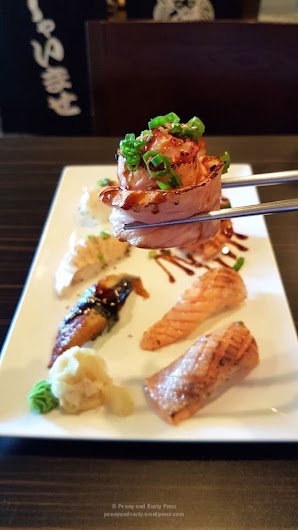 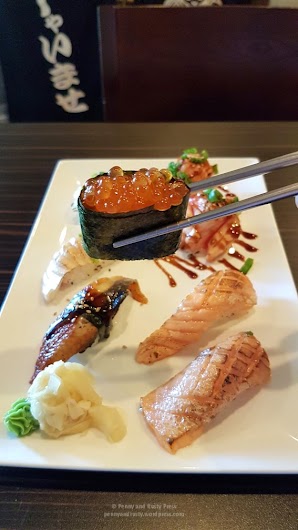 For some reason, I didn’t make a return visit here until November and I had sashimi on my mind. The Assorted A Sashimi ($23) is a bit on the expensive side for 9 pieces of sashimi (3 each of hamachi, tuna, and salmon) but you’re really paying for the hamachi which is also known as yellowtail. The pieces of sashimi are on the thick side and super fresh so you’re paying for the quality here.

Of course, I couldn’t come here without ordering at least one piece of their Torch Salmon Belly ($3.50) nigiri – think their prices might have gone up recently. Love the long tail here and the buttery goodness. 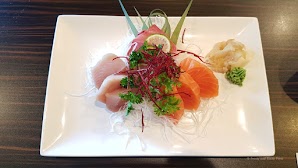 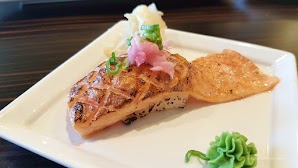 The seating here can be a bit tight if it’s busy and the parking in this mini mall always seems full.